Increasing numbers of Palestinians in Gaza are studying Hebrew so they can follow Israeli media, understand Israeli thinking and, therefore, better manage the conflict between the two sides. 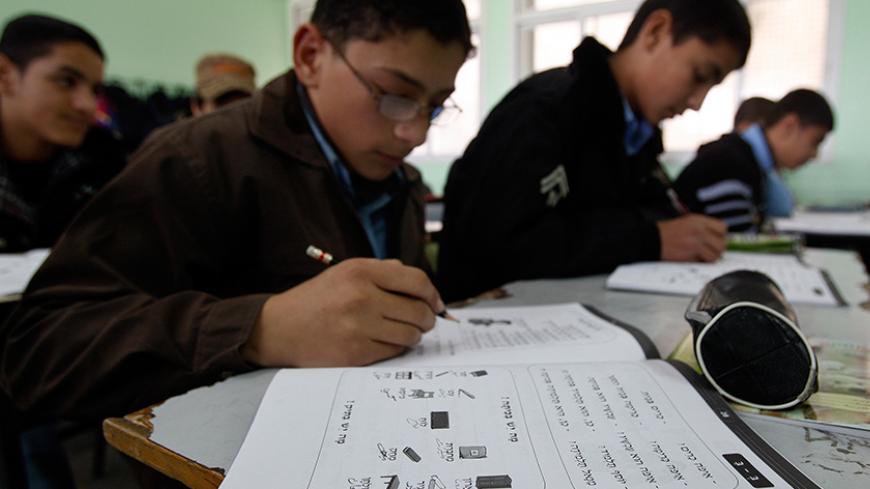 A Palestinian student writes during a Hebrew language class in a school in Gaza City, Jan. 28, 2013. - REUTERS/Ahmed Zakot

GAZA CITY, Gaza Strip — The number of Palestinians learning Hebrew in the Gaza Strip is on the rise, and for a variety of reasons.

“There is a growing need to learn the Hebrew language that stems from the importance of knowing how Israelis think about us and what they say about us on their radio stations, television channels and in the newspapers,” said Ahmad al-Salihi, who is learning Hebrew at the Nafha Center for Prisoners Studies and Israeli Affairs, a local education facility. “During the last Israeli war, Israeli TV channels covered everything that was going on in Gaza for the Israeli public to see. Sometimes, I would see the Israeli reporter being very serious, then I would see him laugh and sometimes he would seem annoyed. I wanted to know the truth behind these mix of feelings toward us,” he told Al-Monitor.

Gazans do not consider Hebrew to be a strange language. Before the second intifada erupted in 2000, more than 40,000 workers from Gaza spoke Hebrew fluently from working for several years in different fields in Israel. Some Palestinian prisoners released from Israeli prisons can also speak fluent Hebrew, and some of them have established centers for studies and translation. Abdul Rahman Shehab, a former prisoner, opened the Atlas Center for Studies in mid-2012 to translate Israeli media reports into Arabic for the people of Gaza to read.

The Hamas-affiliated Islamic University offers Hebrew classes to its students. Hisham al-Zahri, a Hebrew professor at the school, told Al-Monitor, “Since the early 1980s, the Islamic University had been teaching its students in all [disciplines] how to read, write and converse in the ancient Hebrew language. However, a few years ago, the university found it best to only teach Hebrew to students in the faculty of arts and added a course called Studies in Modern Hebrew Literature, which is a new line of study that reinforces mastering the Hebrew language and understanding the Israeli mentality.”

Zahri explained that the university teaches Hebrew because the Prophet Muhammad urged his companions to learn Hebrew to be knowledgeable about the Jews. “This is why it is very important for Palestinians to master this language,” Zahri said.

Ziad Thabet, undersecretary of Gaza’s Ministry of Education, told Al-Monitor, “When Hamas’ mandate ended and the Palestinian consensus government took over in June 2014, the Ministry of Education in Gaza decided to establish a special institute called the Educational Institute for Training and Qualifying to attract those who wish to learn Hebrew away from the formal education sector and in order to maintain Hebrew education in Gaza.”

Thabet said teaching Hebrew in Gaza’s schools stems from the principle of understanding what is going on in the Israeli street regarding the Israeli-Palestinian conflict. He also said, “When we decided to teach Hebrew in our schools, the Palestinian Authority strongly rejected it and considered it harmful to Palestinian identity, but we believe it is very important in order to confront the Israeli occupation.”

“The demand to learn Hebrew is increasing as [people] are seeking jobs in the translation of Israeli media publications from Hebrew into Arabic and want to gain a new language skill,” Mohammed al-Hallak, a Hebrew professor at the Educational Institute, told Al-Monitor. ”Learning Hebrew is available for those who wish to. This is why several Palestinian segments are interested in learning Hebrew, including school and university students, employees and ordinary citizens who want to understand Israeli radio and television.”

“There are six levels to learning Hebrew at the institute, and [the six-course session] costs 550 shekels [about $140], which is a very small amount compared to learning any other language,” Hallak said.

Rafaat Khalidi, a government employee who lives in Khuza’a, east of Khan Yunis in southern Gaza, completed the institute's Hebrew course in May. “Learning the Hebrew language is important for the [coming] Palestinian generations in order to manage the conflict and confrontation with the Israeli occupation,” he said. ”During the recent war in Gaza, a number of Israeli soldiers detained me and my family in our house, and they were shouting at us in Hebrew. We did not understand what they were saying, so they assaulted us and beat us up for 15 minutes before leaving us alone.”

He believes Palestinians’ inability to deal with unusual situations like that — especially near Israeli borders — pushes Gazans to learn Hebrew.

The leadership of the Izz ad-Din al-Qassam Brigades, Hamas’ military wing, views mastering Hebrew as one of the most important criteria for fighters seeking to join the elite unit. They are required to learn the language to improve the outcome of military confrontation with Israeli soldiers, according to Al-Majd, an al-Qassam Brigades affiliated website.

The al-Qassam Brigades has used Hebrew on several occasions when sending messages to the Israeli public, including a song called “Shaking Up the Israeli Security” in July 2014. Also that month, they launched the first Palestinian website in Hebrew affiliated with a military faction.