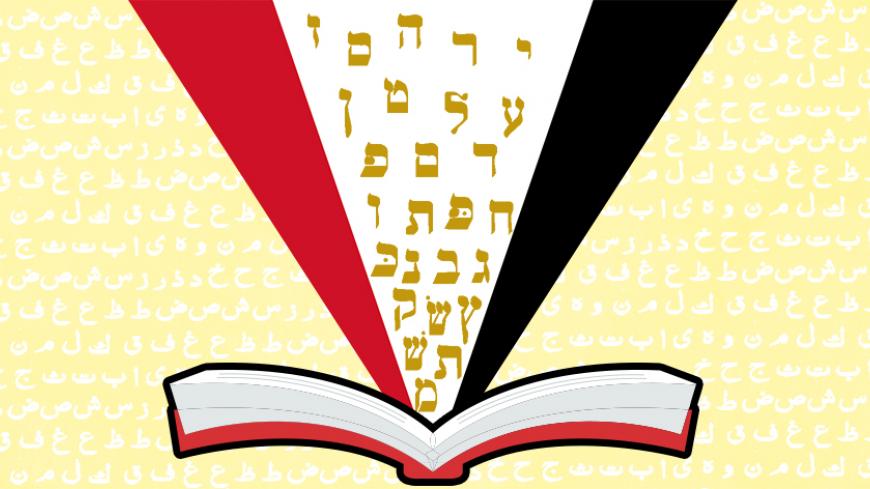 Nevertheless, more Egyptians are showing interest in this language, especially in the past few years, for reasons that range from business needs to cultural curiosity. Hebrew courses are also provided in the armed forces.

Teaching Hebrew was first introduced at the University of Cairo more than 100 years ago. Later in the 1960s, more Hebrew departments were created in other public universities nationwide, with the aim of bringing up Hebrew speakers who understood the language, as well as Israeli culture, history and political orientations.

There are presently 13 Hebrew departments in nine public universities in Egypt, including Al-Azhar University, the highest seat of Sunni Muslim learning. A total of 2,500-3,000 students graduate with some Hebrew proficiency each year, and the number is increasing.

Besides public universities, many private language centers that teach Hebrew have recently found a foothold in the country.

Speaking to Al-Monitor, Eman el-Tayeb, a professor of Hebrew at the state-run Assiut University in Upper Egypt, pointed out that when the university's Hebrew department opened in 2004, only 11 students registered. "Now, more than 110 students enroll in the Hebrew classes annually. The number of students who decided to study Hebrew has radically increased within just 13 years," she said.

Tayeb said that besides the language, the department offers courses in history, literature and the current affairs of Israel.

"We constantly explain to our students that this is not normalization of ties with Israel,” Tayeb said, pointing out that given the long history of strained ties, it was important to learn “your enemy's language. … We usually tell our students that the department has a strategic importance, as Hebrew speakers can work for military intelligence and the Foreign Ministry.”

The Hebrew professor said that as they go through the courses, the students become more comfortable with learning Hebrew and end up enjoying the nuances of the language. "For instance, this year I have many hardworking students who translate Hebrew songs and watch many videos in Hebrew on their own, though this is not included in the curriculum," Tayeb said.

One of the key questions on students' minds is whether learning Hebrew will help in terms of employment. Mounir Mahmoud, a veteran Hebrew teacher and the founder of the private Afaak Academy, which has offered Hebrew courses since 2001, told Al-Monitor, "Many young people seek to speak and study Hebrew to serve in military intelligence or to land jobs associated with Hebrew at Egypt's Foreign Ministry, translation centers, newspapers, strategic research centers, call centers, the broadcasting authority — which broadcasts Hebrew-language television — or in the tourism sector."

Mahmoud went on, "Despite the common political views among the public, the number of students enrolling in our Hebrew courses has increased remarkably, especially in the last six years, because there is a growing awareness that knowing Hebrew can provide an advantage in job opportunities."

The academy divides the whole program into seven levels, starting from phonetics and progressing to basic sentence structures and finally to professional translation of Hebrew texts.

Mahmoud said that while curiosity has led many students to learn the language, some others were forced to join Hebrew departments, which have lower grade thresholds than others. Students with lower academic scores may not qualify for their first choice in programs.

“Some of the students feel under attack because people think that choosing to study Hebrew is equivalent to feeling sympathy for Zionism," Mahmoud said, explaining that Hebrew speakers commonly face accusations such as espionage and are made to feel that they have committed a crime just for studying the language of Israel.

To counter the various misconceptions, the academy also conducts seminars on Hebrew as a language that is not synonymous with Israel as a state. These seminars discuss the history of Arab-Israeli political relations including diplomatic ties, cultural exchanges and negotiations.

Many Afaak Academy graduates have become successful translators, experts in Israeli affairs and educators, and some have found their place in the business sector.

Islam Fawzi is one young Egyptian who studied Hebrew and landed a job using it. Like many students, his high school grades led him to study Hebrew. But after graduation from university and advanced classes in the Afaak Academy to hone his Hebrew, he decided to make the best use of his education by working as a Hebrew customer service agent for the Convergys company.

“I heard many negative comments and many criticized me for studying Hebrew. I was too young to take these comments seriously, but I never thought I would pursue a career associated with Hebrew,” Fawzi told Al-Monitor.

Fawzi said Hebrew is like English, German or any other language, adding that speaking the language used by a group of people does not mean support for them or agreement with their beliefs. "Due to my work, I and my Egyptian colleagues deal with Israeli customers. But my inner thoughts and beliefs have never changed. Speaking English and dealing with Americans, for instance, does not mean that you fully agree with America's policies,” Fawzi said.

Fawzi said many students let a psychological barrier prevent them from studying Hebrew. "On the contrary, I learned Hebrew to prove to myself that nothing can change my thoughts," he said.