Palestinians who learned Hebrew while in Israeli prisons have established research and language centers in Gaza for Palestinians to learn Hebrew and about Israeli affairs. 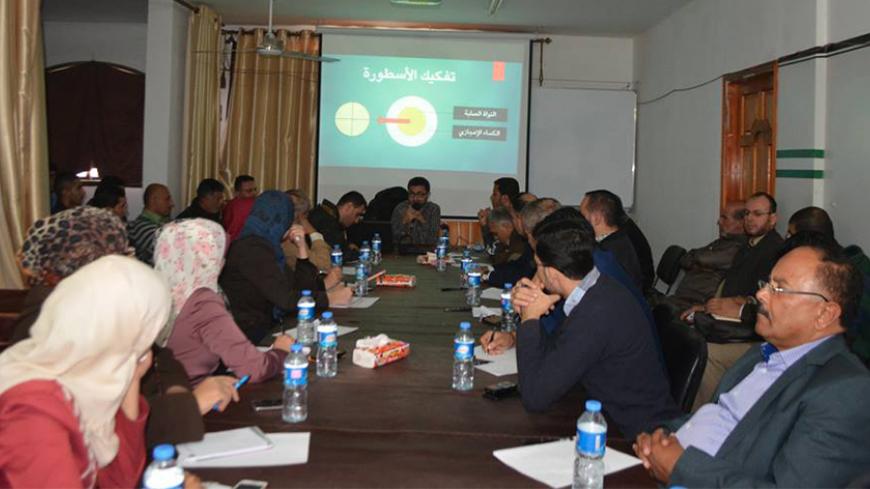 The Atlas Center for Israeli Studies holds a political forum at its headquarters in Gaza City, Dec. 2, 2015. - FACEBOOK/Atlas for Israel Studies

GAZA CITY, Gaza Strip — Many Palestinians follow the Israeli media on a daily basis because developments in Israel directly affect their lives. Those Palestinians who have learned Hebrew through contact with Israelis in the course of work in Israel or integration into Israeli society, can access the gamut of Israeli media outlets, while those who do not understand Hebrew can follow Kol Israel radio, which broadcasts in Arabic. In recent years, the return of released Palestinian prisoners to Gaza has sparked Gazans’ interest in learning Hebrew and more about Israeli society.

Although there are no official statistics available, it is probably safe to say that the number of Gazans who understand Hebrew has declined since 2000, when the second Palestinian intifada broke out and Israel tightened restrictions on Palestinians being able to work there. Later, in 2007, Israel imposed a blockade on Gaza after Hamas seized control from Fatah. As a result, Palestinians and Israelis lost touch with each other, and the former lost interest in Israeli affairs.

In 2011, some 1,000 Palestinians were released from Israeli prisons in the Gilad Shalit prisoner exchange deal between Hamas and Israel. Detention in Israel was a defining experience in the lives of many of the former prisoners, and through their confinement they were introduced to Israeli society. Some of them learned Hebrew on their own and then taught it to their fellow inmates. After their release, some detainees established centers specializing in Hebrew-Arabic translation and research on Israeli affairs. Al-Monitor spoke to several such prisoners, all of them released in the Shalit deal.

In a 2010 report published by the Palestinian Prisoners' Center for Studies, Raafat Hamdouna, a former prisoner and researcher on Palestinian detainee affairs, explored cultural and educational life in Israeli prisons. Hamdouna wrote, “The detainees got their right to university education from the prison administration as a compromise during the hunger strike starting Sept. 27, 1992. At the time, the detainees demanded the right to enroll in Arab universities, but Israel denied them this request to keep them disadvantaged. The detainees learned Hebrew through personal effort and the help of their inmates. Hundreds of them enrolled in universities, and some received bachelor's degrees, while others received master’s degrees.”

During their hunger strike, the detainees had asked to enroll in Arab universities via correspondence courses, but Israeli prison administrators denied their request. The compromise was to allow them to pursue distance education through the Open University of Israel. They submitted their assignments by mail and took their final exams under the supervision of a university representative in coordination with prison administrators. Each detainee was personally responsible for covering their tuition costs. After their release, these detainees became Gaza’s window into Israel.

Mahmoud Mardawi was arrested in 1992 on the grounds of being affiliated with Hamas and participating in the first Palestinian intifada, which broke out in 1987. While in prison, he learned Hebrew and enrolled in the Open University, receiving his bachelor’s degree in Middle Eastern history and a master’s degree in political science. He currently works as freelance researcher on Israeli affairs.

Mardawi told Al-Monitor that he is driven by a desire to enrich Palestinians' knowledge of Israel, saying, “We have a limited and superficial knowledge of Israel, and it is restricted to transmitting information without really knowing the sources of this information and how to verify it.” Mardawi contends that the way to know Israel is through learning Hebrew.

Abdul Rahman Chehab was arrested in 1988 for being affiliated with Islamic Jihad and also participating in the first intifada. Chehab enrolled in the Open University after learning Hebrew from fellow inmates. He received a bachelor’s degree in management and sociology and a master’s degree in political science while in jail.

In 2012, six months after his release, Chehab and other former prisoners established the Atlas Center for Israeli Studies, which specializes in Hebrew-Arabic translation. The center works on documents concerning the Israeli-Palestine conflict and conducts studies and research on Israeli affairs. Chehab told Al-Monitor that he had come up with the idea of establishing the center while in detention, because he felt Palestinians did not know enough about Israel and Israeli society, unlike Israelis, who have access to knowledge about Palestinians.

In addition to translating news and analysis into Arabic as well as publishing original content, Chehab said, “[Atlas seeks] Palestinian interaction with information and raising awareness about Israeli society. Palestinians must realize that Hebrew is a vital and effective language that constitutes a cultural base for an entire society. We cannot access Israeli culture except through it.”

Chehab went on, “Some basic words [in Arabic] are derived from Hebrew. Palestinians use these words on a daily basis. For instance, most tools used in construction have names derived from Hebrew, and so do most agricultural pesticides. Besides, the Palestinian and Israeli economies are connected. Therefore, we must learn Hebrew to be able to understand what is produced in Hebrew in various fields, be it politics, economics, sciences or literature. This would help us understand the structure of the Israeli state and society, and we can develop a Palestinian rhetoric directed at Israeli society.” Chehab said that it is important for Palestinian intellectuals to engage with Israeli society in their rhetoric.

Ahmed al-Falit was arrested in 1992 for carrying out a military operation in the Kfar Darom settlement and received a life sentence for premeditated murder. After his release, he established the Nafha Center for Studies on Israeli Affairs.

Nafha Center Director Israa al-Umrani told Al-Monitor, “The center is for profit, providing translation services from Hebrew to Arabic and vice versa in return for a fee. It also offers a Hebrew-language certificate. Falit teaches the language, and the center will soon announce another program related to the study of Israeli affairs.”

Today, as a result of Palestinians' interest in Hebrew and in learning about Israeli society and how Israelis think, most Palestinian media outlets have dedicated space for news from Israeli media sources. It appears the former prisoners will have a receptive audience for some time.