After Israel increased the number of permits for Gaza workers, merchants and workers are learning Hebrew at Gaza schools. 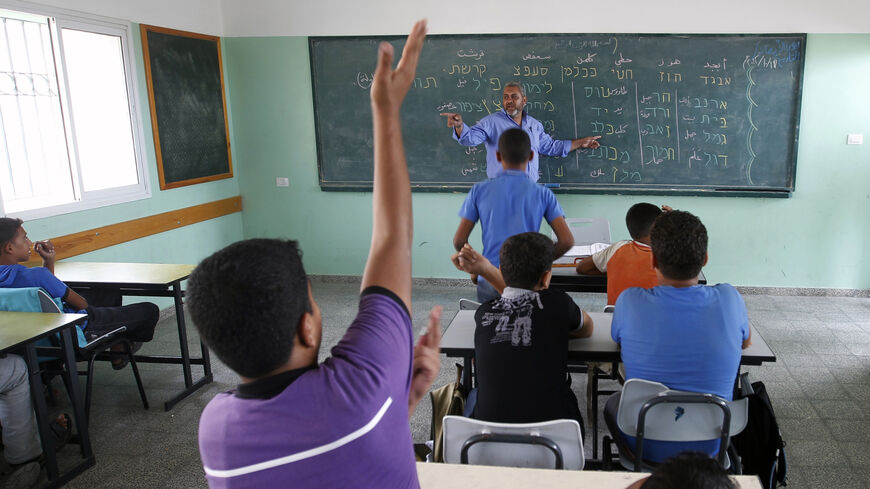 Palestinian boys learn Hebrew at a school in Rafah, in the southern of Gaza Strip, on Oct. 17, 2012. - MOHAMMED ABED/AFP via Getty Images

Israel announced Oct. 20 that it will increase the number of work permits available to Palestinians in the Gaza Strip from 7,000 to 10,000.

The Coordinator of Government Activities in the Territories said in a Facebook post that the decision was made after a security assessment that all of the recent measures announced by Israel depend on stability in the Gaza Strip being maintained.

From 2007 until late 2019, Israel prevented all Gazan workers from entering its territories. The ban has ended but even in 2020, only 0.1% of Gazans who held an Israeli work permit were allowed to enter Israel, according to a 2020 report by the Palestinian Central Bureau of Statistics.

Before Hamas took control of the Gaza Strip in 2007, Palestinian workers inside Israel stood at 120,000.

Tens of thousands of unemployed Palestinians eagerly seek work in Israel amid the high unemployment rates in the Gaza Strip — that reached 48% in the first quarter of 2021 — made worse by the Israeli blockade imposed since 2006 and the Palestinian Authority’s decision to stop hiring Gazans following the internal split in 2007.

In light of the difficult conditions in the besieged enclave, thousands of unemployed Gazans applied for permits to work inside Israel.

Most of these workers do not speak Hebrew, which is not taught in the Palestinian curriculum. The Hebrew language is only taught as an elective course in some Palestinian universities. Many Gazans are now seeking to learn Hebrew in specialized language centers in the Strip.

Al-Monitor visited the Nafah Training, Language and Translation Center, which offers Hebrew courses for Gazan workers and merchants taught by Palestinian former prisoners who learned Hebrew while in Israeli jails.

Director Ahmed al-Falet, a former prisoner released in the 2011 Gilad Shalit prisoner exchange deal, told Al-Monitor, “It is important for merchants and workers to master the Hebrew language, because it facilitates their communication at the Beit Hanoun crossing.”

He added that merchants do not need to learn to read and write in Hebrew, as simply speaking the language is far more important for them.

“The course extends over six months divided into five levels. The fact that most workers and merchants do not have the basics of the Hebrew language makes the trainers’ task very difficult … even though 80% of the merchants who are enrolled in the business terminology course hold university degrees,” Falet added.

He pointed out, “As soon as the Hebrew conversation and business terminology course at the center was announced [on Oct. 7], merchants and workers rushed to register.” The course now counts 60 students.

Falet believes that it is important for Gazans to learn Hebrew to participate in trade and business relations as well as medical transfers between Israel and Gaza. He added that 3,000 students have graduated from his center in the past seven years and can now easily communicate with Israelis.

Many Gazans do know some Hebrew. Before the second Palestinian intifada in 2000, more than 40,000 workers from Gaza were fluent in Hebrew, a language they acquired while working in Israel in various fields.

Mohamed Tanani, who lives in Jabalia refugee camp in northern Gaza, studied basic education for two years at Al-Quds Open University in Gaza. He is now taking Hebrew classes at the Nafah center.

“I came to learn business terminology in Hebrew. I work at a sewing factory with my father who has a permit to work inside Israel,” Tanani told Al-Monitor. “I have to learn Hebrew to communicate with merchants in Israel. My father’s business is registered for import and export from Israel, and our work focuses on the city of Tel Aviv. I applied for a work permit and I expect to be accepted.”

Hatem Moqbel, a contractor from Gaza City who operates in Israel, is also taking the course. Moqbel told Al-Monitor that he wants to learn how to read and write in Hebrew, which he has spoken since he was 12 years old.

Moqbel seeks to establish a contracting business have his son, who studied civil engineering in Gaza, run it. He said he will manage the business from inside Israel, so he needs to learn how to read and write in Hebrew in order to sign documents.

Louay Ayesh, 17, who lives in Gaza City, is also student at the center. He told Al-Monitor that he is seeking to learn Hebrew even though he is not allowed to enter Israel because of his age. He added that his father owns a sewing factory, has a work permit inside Israel and knows the language.

Ahlam Abu Gholi from al-Bureij refugee camp in central Gaza City is also learning Hebrew at the Nafeh center. He told Al-Monitor, “I expect the residents of Gaza to obtain additional incentives, such as being allowed to live and work in the West Bank. That is why I am learning Hebrew.”

Abu Gholi, who did not find a job after graduating with a degree in media and public relations studies, added, “I want to complete a master's degree at Al-Quds University in Abu Dis in Jerusalem, and I hope that the residents of Gaza will be allowed to study in the West Bank and east Jerusalem.”