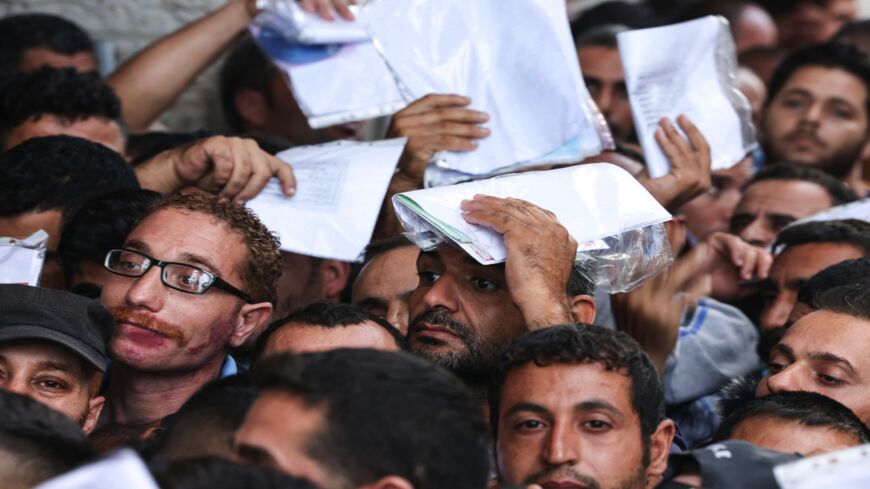 Palestinian men gather to apply for work permits in Israel, at Jabalia refugee camp in the northern Gaza Strip, on Oct. 6, 2021. - MAHMUD HAMS/AFP via Getty Images

The Coordinator of Government Activities in the Territories (COGAT), the Israeli military liaison to the Palestinian territories, said the new work permits bring the total of recently announced permits to 10,000.

“The decision to increase the quota of merchants was made by the political echelon following a security assessment on the matter,” COGAT said in a statement.

COGAT said the permissions are “conditional upon the continued preservation of the region’s security stability for the long term.”

Since Hamas seized control of the Gaza Strip in 2007, Israel and Egypt have maintained a tight blockade on the enclave that rights groups say amounts to collective punishment. Travel abroad is difficult for Gazans, with just two crossings — Erez to Israel and Rafah to Egypt — open for limited pedestrian travel.

The movement restrictions, combined with multiple wars with Israel, have devastated Gaza’s economy and left a majority of the seaside territory’s population without clean drinking water, electricity or a proper sewage system.

Israel heavily restricted the flow of goods and people from Gaza following its 11-day conflict with Hamas in May, which killed more than 250 Palestinians and 13 residents of Israel. The two sides have since been holding indirect talks facilitated by Egypt aimed at shoring up the fragile cease-fire that ended the previous round of hostilities.

In recent months, Israel has loosened restrictions on goods and materials entering from the Gaza Strip, and has expanded Gaza’s fishing zone. In what Israeli Defense Minister Benny Gantz described as a humanitarian gesture, Israel on Tuesday approved the residency of some 4,000 undocumented Palestinians, many of whom moved to the West Bank from Gaza following Hamas’ 2007 takeover.