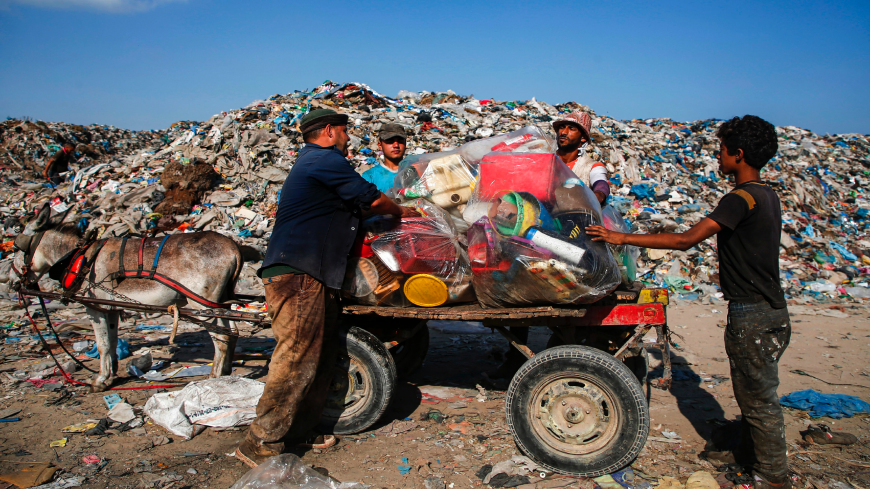 Palestinian garbage collectors load packed jerry cans onto a donkey-cart at a landfill in Gaza City on July 29, 2019. Some Palestinians, driven by poverty exacerbated by the Israeli blockade and lack of employment opportunities, have resorted to combing landfill sites for bits and pieces of rubbish and scrap to sell. - MOHAMMED ABED/AFP via Getty Images

Israel’s military operations in the Gaza Strip and the ongoing blockade of the Hamas-ruled enclave have caused as much as $16.7 billion in economic damage, the United Nations said last week.

In a report submitted to the UN General Assembly, the UN Conference on Trade and Development (UNCTAD) put the estimated cumulative economic cost between 2007 and 2018 at $16.7 billion, a sum that is six times Gaza’s annual gross domestic product for 2018. The agency said the poverty rate reached 56% in 2017, compared to the expected 15% projected for that year were it not for the blockade and military operations.

Hamas seized control of the Gaza Strip, a tiny seaside territory of some 2 million people, from the rival Palestinian Authority in 2007. Israel and Egypt have since maintained a blockade that rights groups say amounts to collective punishment. Travel abroad is difficult for Gazans, with just two crossings — Erez to Israel and Rafah to Egypt — open for limited pedestrian travel.

The movement restrictions, combined with three wars with Israel since 2007, have devastated Gaza’s economy and left a majority of the population without clean drinking water, electricity or a proper sewage system.

“The result is the near collapse of the regional Gaza economy while trade is severely restricted from the rest of the Palestinian economy and the world,” UNCTAD said.

Lifting the blockade, the UN agency said, is essential “to restore the right to free movement for business, medical care, education, recreation and family bonds.”

The report also called for Hamas to halt its practice of launching rockets and incendiary devices toward Israel. Over the summer, the Palestinian militants had launched bomb-laden balloons and rockets into southern Israel, prompting near-daily retaliatory airstrikes before a Qatari-brokered cease-fire halted the violence.