A UN report has warned that Gaza may become uninhabitable by 2020, yet according to some Gazans the precarious security and living conditions make the coastal strip already unlivable. 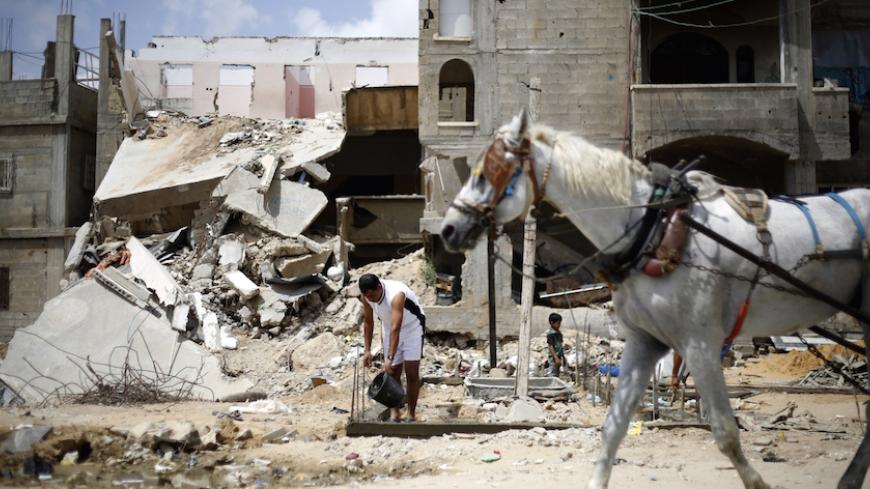 A Palestinian man in the Eastern Gaza City Shujaiya neighborhood uses a bucket of water on June 28, 2015, as he reconstructs his house, which was destroyed during the 50-day war between Israel and Hamas militants in the summer of 2014. - MOHAMMED ABED/AFP/Getty Images

BEIT HANOUN, Gaza Strip — Palestinians living in the Gaza Strip questioned the United Nations report that warned that Gaza might not be a livable place by 2020, in the belief that the Hamas-ruled coastal strip became uninhabitable years ago and that there is no need to wait five more years to make it official.

The United Nations Conference on Trade and Development predicted that the Gaza Strip could become “uninhabitable by 2020.” The report said this prognostication was based on the continuation of current economic trends in the Gaza Strip over the next five years.

The UN report also said, "The social, health and security implications of the high demographic growth and overpopulation are among the factors that may make Gaza uninhabitable by 2020.”

Maysa al-Masri, a mother of five living in the town of Beit Hanoun in the northern Gaza Strip, told Al-Monitor, “I feel scared when hearing about or reading such reports. I always think about emigrating, and I am constantly looking for a safe place for my family and myself.”

She added, “I am afraid because unemployment rates may increase and the situation will get worse, in addition to not having any prospects for a solution that could improve the situation. But I think that many people will manage to cope with the bad situation, as they have done so for many years.”

Meanwhile, Ali Alyan, a father of two, believes that Gaza is currently uninhabitable, and that the year 2020 as stated in the UN report is too late.

“We have been living in an uninhabitable place for many years. Things have been getting complicated since the war last year, and if you look at our situation you will find that the elements of life are absent here,” he told Al-Monitor. “The electricity is cut off, infrastructure is destroyed, water is not safe to drink, transportation is difficult and agriculture continues to deteriorate. Diseases are spreading as a result of the poor environmental situation, while poverty and unemployment continue to increase.”

The Gaza Strip, a coastal area overlooking the Mediterranean Sea, is bordered by Egypt in the southwest. Roughly 1.8 million people live in an area of 362 square kilometers (140 square miles) that extends along 41 kilometers (25 miles) in length and 6-12 kilometers (4-7.5 miles) in width. It is one of the most densely populated areas in the world.

Zekra al-Ghoul agrees with Alyan that Gaza is uninhabitable, and that “sooner or later everyone will leave” if the concerned authorities — on the local and international level — do not intervene to put an end to the deterioration of the lives of the Palestinians.

“I love Gaza. I have lived here most of my life, but now I am seriously trying to leave and go abroad. I am afraid the situation will worsen while we can hardly live here today. I don't know how the situation will be in five years,” she told Al-Monitor.

The Gaza Strip has been suffering from the Israeli blockade since the Hamas takeover in 2007. Gaza has seen three wars in six years, the last of which was the 50-day war in July-August 2014.

The reconstruction process of homes and facilities that were destroyed last summer has been slow as a result of limited international funding to the United Nations Relief and Works Agency for Palestine Refugees in the Near East and to the Palestinian government, in addition to Israeli restrictions on the entry of construction materials into the Gaza Strip that have been in place for several years.

Some Palestinians who met with Al-Monitor believe that Hamas is responsible for the economic and developmental deterioration in Gaza, while others blame Israel and the Palestinian Authority as well as the international community.

Alyan said, “As the party primarily responsible for the Gaza Strip, Hamas is liable for the current situation.” When asked if Israel was responsible because it imposed the blockade, he said, “Before Hamas rule and during Israeli rule, things were not as they are today.”

Hamas and Fatah exchange accusations through the media, as each party holds the other responsible for the siege of the Gaza Strip, and the current political division — in which each party accuses the other of disrupting the reconciliation — is impeding the development of Gaza.

Hassan Ziade, the social and psychological specialist with the Gaza Community Mental Health Program, believes international reports on Gaza being uninhabitable within a few years make residents “feel afraid and anxious and sometimes desperate that they are unable to make a change.”

He told Al-Monitor, “When the media broadcast negative reports, Palestinians feel even more helpless and frustrated and fear the future. They could even reach the stage of despair, which in turn has negative [repercussions] on human development and the ability to be productive in the future.”

He added, “There are three categories of people: Some might consider immigration in search for a better place to live with their family and children, others live in frustration and despair and surrender to reality, while still others try to overcome the crisis by coping with the reality in spite of all its downsides."

Regardless of the degree of accuracy of the international reports that predict a bad future for the Gaza Strip in the coming years — especially if the political division, the Israeli blockade and the decrease in the international funding persist — Gazans are living a complicated reality they cannot be envied for, while they cannot see the light at the end of the tunnel that might end their suffering.