Living among the dead in Gaza

The Palestinian Ministry of Public Works and Housing has failed to provide housing for Gaza’s families, forcing some to live in cemeteries and beg for money. 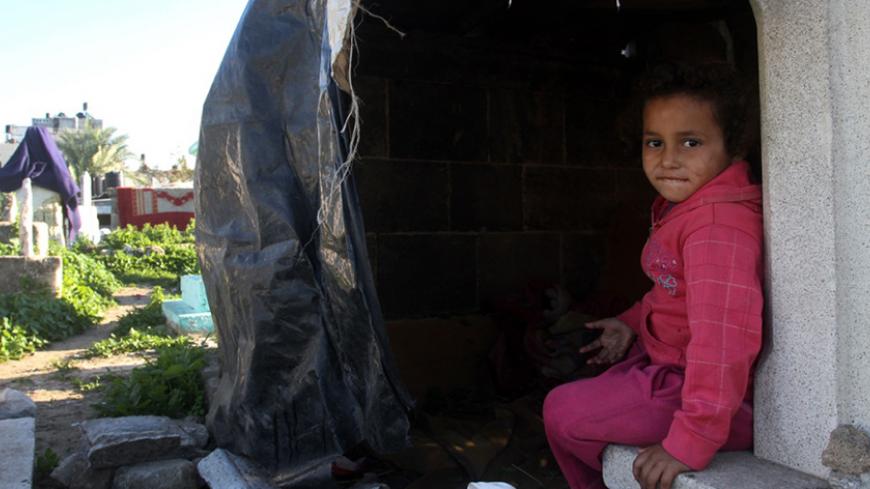 A Palestinian girl is seen outside her family's home in a graveyard in Gaza City, where they are forced to live due to deteriorating living conditions and a lack of housing, Jan. 5, 2014. - Yasser Qudiah

GAZA CITY, Gaza Strip — “We smell the stench of death everywhere and all we see is the burial of the dead. We no longer know the meaning of leisure, as we have abandoned the hope of living.” This is how Abu Raed al-Qahwaji described the life of his family, which lives in a cemetery called the “Baptist” in central Gaza.

Qahwaji, 39, who lives in the cemetery with his wife and four children, told Al-Monitor, “We used to live in a small flat in an apartment building in the Shajaiya neighborhood in central Gaza City. We could not afford the monthly rent, but a businessman took care of it as a donation. However, the building was destroyed in the war and we were left with no other choice but this ‘small hut’ I set up in the cemetery.”

He explained that he could not find any other shelter given his dire situation, poverty and unemployment, while the demand on apartments was increasing following the war that destroyed tens of thousands of houses and apartment buildings.

“We have become like the living dead. We have no food, home or clothing,” he said indignantly. “We live off some of the aid we receive from charitable associations and some good people on an irregular basis.”

According to statistics by the Palestinian Central Bureau of Statistics, the unemployment rate in Gaza reached 44.5% for the second quarter of 2014, which rose steeply following the Israeli war.

This war, which lasted 51 days (from July 7 until Aug. 28), caused the demolition of 60,000 houses, of which 20,000 have become uninhabitable, according to a statement by the United Nations Relief and Works Agency for Palestine Refugees in the Near East (UNRWA).

Near the hut of the Qahwaji family, three children from another family sat on the edge of a grave. They seemed to be waiting for something.

Al-Monitor asked them why they were there. “We live here. We wait for mourners to bury one of their dead. It is our opportunity to make some money,” Mohannad, 13, said, pointing at a run-down tent where he lives.

He said his unemployed father has pushed him and his brothers to provide for the family. They wait to beg for money from families burying their dead, and in return the children promise to take care of the graves of their deceased.

Mohannad’s 11-year-old sister, Mounira, interrupted him. “Every morning, the three of us clean the graves, water the soil surrounding it and place fresh flowers on them for 10 shekels ($2.50) a week for each grave,” she said.

The children’s father, Mohammed Rizq, shouted at them from afar, telling them to stop talking and to get back inside the tent.

We asked him how many families live in this cemetery. “There are about 45 families,” he answered uncomfortably.

When we asked him why he was living there, he replied angrily, “Go away. We are tired of talking to you to no avail.”

An economics professor at Gaza's Al-Azhar University, Moein Rajab, said that the grinding poverty plaguing Gaza is the main reason people live in cemeteries. This is not to mention the repeated Israeli wars since 2007 that have led to the destruction of thousands of homes, added to the increasing birth rate in an area with high population density.

“Nearly two-thirds of Gazans are suffering from extreme poverty. The wars have left them homeless. Gaza, with an area of 365 square kilometers [141 square miles], is considered one of the most densely populated areas in the world, with 4,000 people per square kilometer [10,360 per square mile],” Rajab told Al-Monitor.

“As a result, many negative social phenomena emerged, including the state’s inability to provide sufficient housing, health care and good education, in addition to insufficient food supplies,” he added.

Rajab said because of these social conditions, the number of criminals and beggars has increased, while many families are living in the rubble of their homes and in public places, such as cemeteries.

An official source at the Ministry of Public Works and Housing admitted his ministry’s negligence in providing these families with decent housing. “We recognize our failure to provide the basic needs of housing to these families, but we found ourselves helpless in light of the deteriorating economic and political situation in Gaza,” he told Al-Monitor.

The source, who spoke on condition of anonymity, said, “Living in the cemeteries is seen as a legal infringement and a violation of the sanctity of the dead. However, given the dire economic situation, we have no other alternative to deal with this problem.”

He said that the foundation stone had been laid in many housing projects to build thousands of housing units in Gaza, but all these projects were halted “due to the war and the political situation. One of these projects includes the Sheikh Hamad residential city project, which was inaugurated by the former emir of Qatar [Sheikh Hamad bin Khalifa Al Thani].”

Hamas visited Gaza in October 2012 to lay the foundation stone for the construction of several housing and development projects, in the framework of the reconstruction of Gaza following the 2008 Israeli war. Qatar’s grant amounted to $254 million.

Faced with the challenge of finding a decent place to live, Qahwaji said, “Gazans have countless concerns that override their dreams. We only hope that one day our sufferings will come to an end.”