With an average 5.7 births for each woman, Gaza’s government has no plans to curtail population growth. 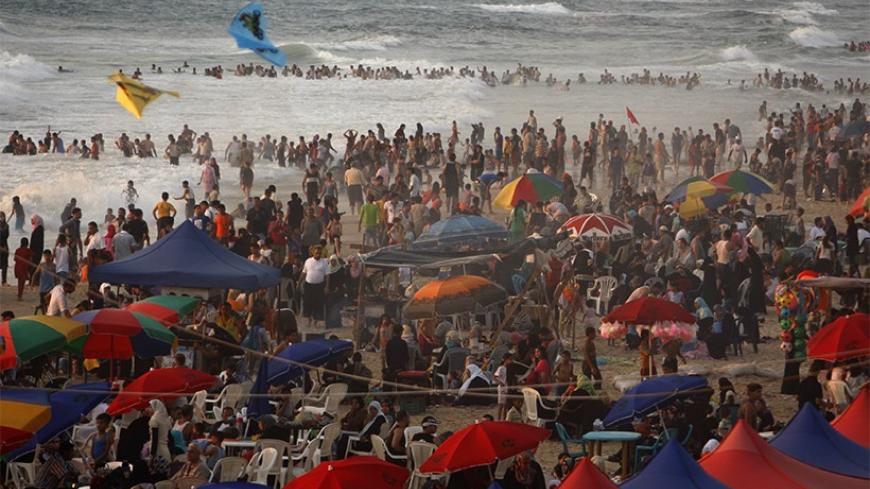 Palestinians get together on a Gaza City beach, June 24, 2011. - REUTERS/Ibraheem Abu Mustafa

GAZA CITY, Gaza Strip — Gaza schools are overcrowded with students. According to interviews Al-Monitor conducted with schoolteachers, the average number of students in classrooms reaches 40 in both public schools and those affiliated with the United Nations Relief and Works Agency (UNWRA), reflecting the demographic reality in the Gaza Strip.

“The population of the small Strip, whose area is 365 square kilometers [141 square miles], passed 1.865 million in March, or 5,109 people per square kilometer. Thus, the Gaza Strip is on the list of the most densely populated areas in the world,” said Riad al-Zeitouniya, the head of the Civil Status and Passport Department in the Ministry of Interior of the Gaza government, speaking to Al-Monitor.

A UNRWA report published in 2012 said that by 2020 Gaza’s population will reach 2.1 million, and pointed out that basic infrastructure such as electricity, water, sanitation and social services cannot keep up with the needs of the growing population. The Gaza Strip needs much more electricity, hundreds of new schools and hospitals and thousands of housing units by the year 2020.

“Gaza has become a dense urban area that is currently facing a housing units shortage estimated at about 71,000,” the report added.

Experts attribute this increase in population to the high fertility rate of Palestinians in the Gaza Strip. The executive director of the Association of Family Planning and Protection, Muyassar Abu Mailaq, told Al-Monitor that the fertility rate for the people of Gaza has long been up to 5.7 children per woman. He said, “According to my work, family-planning methods in all government clinics and those affiliated with UNRWA are available. But some causes have led to increased fertility, thanks to eastern customs and traditions. Palestinian families like procreation, and they don’t consider five or six to be a large number.”

Abu Mailaq said that Gaza's fertility rate would be considered high even for developed countries with a high average income, let alone for a besieged territory suffering a blockade, extreme poverty, high unemployment and low per capita income.

Abu Mailaq warned of worsening health, marital and social problems, as well as educational problems caused by the high number of students in classrooms. There is also an absence of clear government population policies in the narrow Gaza Strip, increasing employment demands and difficult conditions.

It is worth mentioning that in Palestine, along with other Arab countries, laws limiting the number of children per family, such as those in China, are unthinkable. The issue is considered a matter of personal freedom.

Ahmed Fadel, a taxi driver in his 70s who is married to four women, told Al-Monitor that he has 22 children, the youngest of whom is a 5-month-old girl.

Along with the help of some of his adult sons, Fadel is barely able to cover the expenses of his large family, consisting of more than 55 people, including his four wives and grandchildren. But Fadel insists he likes having a large family, saying, "My father liked big families, and I have 15 brothers. Most of my relatives like to have large families. We don't like having two, three or even five. Large families are a good thing, and God will provide for us."

As for Hassan Sobh, 27, who married six years ago, he believes that having many children is not a problem, as a big family provides "protection."

Sobh, who works as a construction worker, told Al-Monitor that he wants a large family, perhaps as many as 20 children. He said, "I now have four sons. Despite the difficult economic situation facing us, I will not stop having children. I love [having children], and there is nothing preventing me from having more."

According to experts, the absence of population policies in the Gaza Strip and the lack of strategic plans to cope with its growth has turned Gaza’s population into a ticking time bomb. The director of Palthink for Strategic Studies, Omar Shaban, told Al-Monitor that the problem has become worse as no Gaza government — nor the Palestinian Authority in the West Bank or the international community — have put forward plans to cope with the population growth.

“Population growth,” he said, “is a bomb that can explode at any time and result in economic, social, educational and health consequences. The population in the Gaza Strip is one of the key challenges not only for the Palestinian political regime but also for the regional powers. It is a Palestinian, Arab and international responsibility. Unfortunately, not enough attention is being paid to develop solutions. There are warnings, as in the UNRWA report a year ago, and these warnings don’t propose any solutions.”

The UNRWA report concluded that in the absence of effective and sustainable remedial action and a favorable policy environment, the current challenges facing the people of Gaza will get worse. The UN expects the population to increase by 500,000 by 2020, warning the situation will get worse if action is not taken.