As many as 35,000 Palestinians residing in Gaza are unable to leave the territory until Israel issues them identity cards. 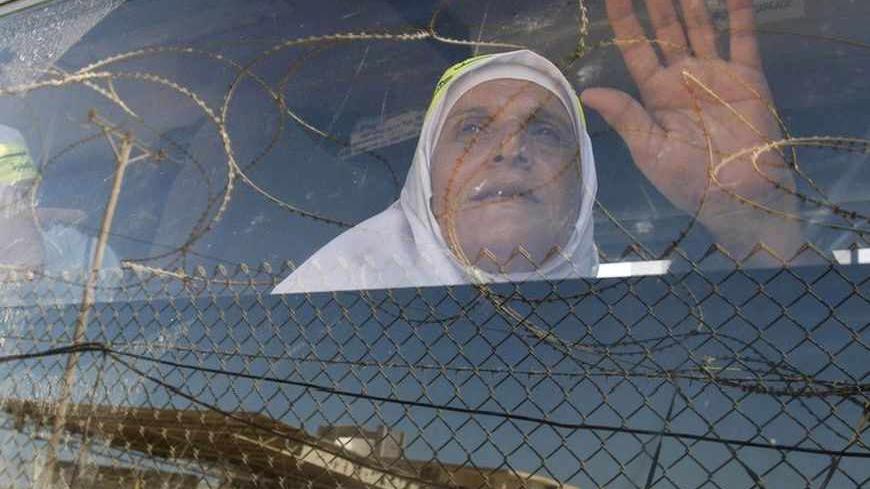 A Palestinian woman waves her hand as she sits in a bus in the southern Gaza Strip before leaving Rafah border crossing for the annual hajj pilgrimage to Mecca, Oct. 14, 2011. - REUTERS/Mohammed Salem

When Safaa Hasanat, 40, got married and moved from Saudi Arabia to the Gaza Strip in 1999, she didn’t realize she was putting herself in an open-air prison with almost a life sentence. As Hasanat does not have a Palestinian identity card, she has not been able to leave Gaza since.

According to Riad al-Zeitouniya, the head of Gaza's Civil Affairs Office, Hasanat is only one of up to 35,000 Palestinians who were born in other countries and now reside in Gaza with no identity cards issued by the Israeli-run Palestinian registration. Consequently, these people live in Gaza with few rights, most important of which is the right of movement to any other country, including even the West Bank.

The origin of the problem stems back to the 1980s when hundreds of Palestinian families made it to Gaza without having received a reunion document, which entitles inhabitants to an identity card as sanctioned by the Israeli occupation.

A Palestinian non-identity card holder is permitted to apply for a reunion document if a first-degree relative holds an identity card.

The issue was included in the Oslo Accords in 1993, and 800 Palestinians were scheduled to receive reunion documents. But the number of those waiting was too large at the time, with more than 7,000 applicants in 1994, thus leaving a lot of Palestinians in limbo, according to Zeitouniya. This figure would have required almost a decade to process.

The largest number of reunion applications was from 1994 to 1996, but the process was stopped intermittently during this period by Israel in response to Palestinian suicide attacks. Israel halted the process entirely in Aug. 2000 as a form of collective punishment on the Palestinians, Zeitouniya said.

“In 2007 an agreement was reached between Palestinian President Mahmoud Abbas and (Israeli Prime Minister) Ehud Olmert that each Palestinian who made it to Palestine with a visiting visa should get a Palestinian identity card based on getting a family reunion. Back then, we received 13,000 reunion documents,” Zeitouniya told Al-Monitor.

The process was halted again after Israel’s Cast Lead offensive against Gaza in late 2008, and it has remained as such ever since. There were 5,000 identity cards that were ready for distribution at the time, according to Zeitouniya, but were never handed to the Palestinian side.

Hasanat was told that she was one of these 5,000 Palestinians, yet she has not heard any news since that date. For her internal transactions, the Hamas-run government issued Hasanat and people like her a card that she can only use inside the Gaza Strip.

“I have nothing to prove that I’m Palestinian, or even a human being,” Hasanat remarked disappointingly.

The number of Palestinians living in Gaza with no identity cards is steadily rising. It includes people who made it to Gaza legally with visit permits, as well as those who crossed illegally through the tunnels stretching under the Palestinian-Egyptian borders.

Zeitouniya said that he meets with Israeli officials every three months at the northern terminal of Erez between Gaza and Israel to discuss civil affairs issues, but nothing on the ground is happening.

“We were told by the Israelis that the file of the identity cards is closed until further notice, and that this is an order from more senior ranks,” Zeitouniya clarified.

With time passing, many have started to lose hope in ever receiving their identity cards or leaving Gaza one day. Tens of people used to come to Zeitouniya’s office asking for news on their cards, he recalled, but today no one is coming.

Mohammed Hamooda, who was born in Jordan and moved to Gaza along with his family in 1999, is still waiting like many others, but he is pessimistic about receiving his card.

“My parents died while waiting to get identity cards, and I think my destiny will have no difference,” Hamooda told Al-Monitor.

People without identity cards are denied their simplest rights, from visiting religious sites outside of Gaza, or the right to medical treatment abroad. Hasanat has problems in her kidney, and in addition to not being able to travel for proper medical treatment, she was unable to see her mother in Saudi Arabia before she passed away in 2007.

“It was the hardest time,” Hasanat recounted.

Hasanat laments the gap that has developed between her and her family in Saudi Arabia over the past 13 years. Her siblings have grown up, and have become people almost unrecognizable to Hasanat.

“If we meet one day, it will feel like strangers meeting. All of this is because of a paper,” she said.