Sneaking into Israel is becoming a more attractive option for Gaza’s unemployed youth as living conditions in the besieged enclave continue to deteriorate. 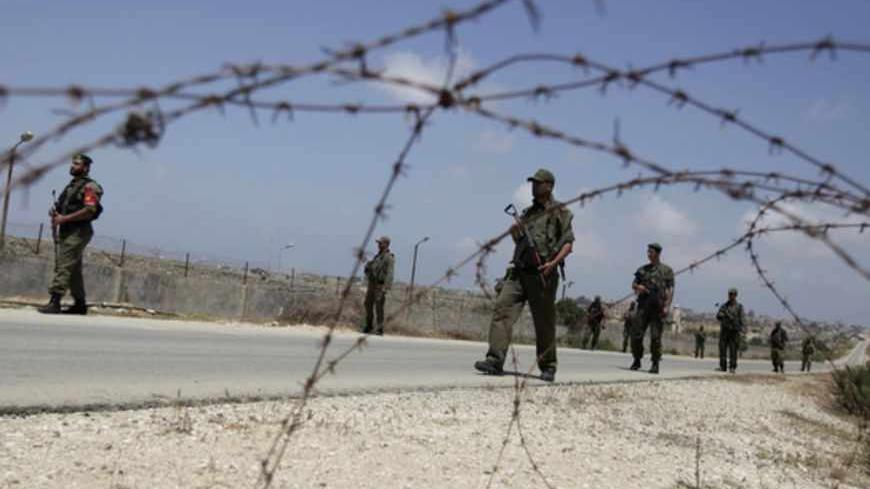 Members of the Hamas security forces patrol the border area between Gaza and Egypt, in the southern Gaza Strip, May 20, 2013. - REUTERS/Ibraheem Abu Mustafa

Mohammad Abu Huzayen dropped out of elementary school to look for a job to support his nine-member family. Frustrated with the lack of opportunities, the 17-year-old from Al-Nusayrat refugee camp in central Gaza turned to an unexpected option: escaping to Israel.

Along with three friends of roughly the same age, Abu Huzayen planned to take the risk of sneaking into Israel in February. The motivation of the four friends was to seek a modest life after losing hope finding it in their besieged enclave. The teens were sure they would either be able to sneak in or get arrested; both options were welcome to them.

“We wanted anything outside Gaza, even if it was jail. It’s not even a life here,” Abu Huzayen told Al-Monitor.

The teens started the journey by crossing the eastern Gaza border in an early morning in February Abu Huzayen cannot precisely recall. They walked for more than a kilometer into Israel, thinking that they had successfully made it across, before being spotted by Israeli troops, who hastily detained them.

“When the Israeli soldier was handcuffing me, I was still happy that I would be able to start a new phase of my life away from my miserable life here,” Abu Huzayen recalled.

The four friends were kept for two days at the Israeli prison in Beersheba before they were transferred to Ofer prison, to the west of Ramallah. They spent three months there before being released less than a month ago, according to Abu Huzayen.

Abu Huzayen mentioned he saw many "illegal immigrants" at the reformatory who had also been captured while sneaking in from Jordan and Egypt, yet the largest number of them were from Gaza.

Sneaking into Israel to find work is common for Gaza’s residents who live near the eastern border. It’s rarely heard about in other areas of the besieged coastal enclave, but people of this area speak of young men sneaking regularly into Israel.

If someone intends to traverse the border into Israel for work, it is kept a secret, even from family members. It is common wisdom that those taking this step should tell only people that they trust, particularly if the family begins asking questions.

Life in Gaza has sharply deteriorated since Israel imposed its siege on the Gaza Strip in 2007. Thousands of workers lost their jobs inside Israel after the second intifada, when Israel closed the border to workers in 2000. Six years after Hamas took power in Gaza, Israel continues to collectively punish 1.7 million Palestinians in Gaza by maintaining its strict siege on the coastal enclave.

According to the most recent available statistics from United Nations Relief and Work Agency in 2011, Gaza’s unemployment rate stands at an unprecedented 45.2%, one of the highest in the world.

At least 39% of Palestinians in Gaza live below the poverty line, with one in five living in deep poverty and 80% of households receiving some form of assistance to stay afloat. Unless Israel eases its restrictions on Gaza, “The proportion of Gazans in need of social protection will remain high over the coming decade,” a UN report from August 2012 warned.

The situation in Gaza has become so dire that some young men prefer life in an Israeli jail to the open-air prison that is Gaza. The four teens, all under the age of 18, were kept at an Israeli reformatory, which made their jail experience different from that of other Palestinian prisoners.

“It was a good experience. I enjoyed my time there, having a comfortable life and good labor,” Abu Huzayen noted.

The inmates would be woken up at 7 a.m. and then taken to their workplace, located near the reformatory. Their job was to sort restaurant items into boxes. For each box made, they were paid roughly $5. After work, at 1 p.m., the teens would return to their rooms and watch television.

“We weren’t directly paid the money; the [prison] administration would accumulate it in the storehouse of the reformatory so we could purchase things when we wanted,” Abu Huzayen explained.

Unlike Abu Huzayen, who enjoyed his sentence period at the Israeli reformatory, Murad Abu Darahem, 23, also from al-Nusayrat camp, regrets sneaking into Israel. Abu Darahem was arrested and sentenced to nine months at Ofer prison, convicted of illegal entry.

Abu Darahem would suffer constant beatings from his father for failing to find work in the impoverished Gaza Strip, before deciding to flee to Israel in August 2012. He hoped to pass through the Israeli border and find a job there, but his dream was killed the moment he was handcuffed.

“I spent nine months doing nothing but wasting days. I only wanted to work, nothing else,” Abu Darahem said.

He had heard numerous stories of people attempting to sneak into Israel, but he never took the idea seriously until he got the last slap on his face from his father, trying to force him to find a job.

“Going to Israel wasn’t my ultimate dream, yet it was the only option I had,” he explained.

But this was not the only hardship Abu Darahem faced. After being released a month ago through the Erez crossing, Abu Darahem was immediately summoned by Hamas’ internal security forces for questioning over possible collaboration with the enemy.

“While I was running to see my father waiting for me at the border crossing, I was surprised by [Hamas] security men taking me to an investigation room at the border. I was beaten and asked if I had become a spy,” Abu Darahem said.

Hamas, a resistance faction and the government in Gaza, is increasing its surveillance of possible collaborators with Israel, which continue to be a main concern for the Islamist movement.

Asked by Al-Monitor if he received an offer to collaborate from the Israelis, Abu Darahem said no.

“Even if it were offered, I would have never thought of it for a second. I’m only looking for my right of having a decent life. I won’t harm my people for the sake of money.”

Sarit Michaeli, a spokesperson for Israeli NGO B’Tselem, told Al-Monitor that her group is trying to document cases of young Palestinian men sneaking out of Gaza for work.

“I don’t exactly know about the number of people who sneaked or got arrested while sneaking, but I’m assuming that even if there are some people who managed to go to Israel, it will be impossible for them to disclose their origin, lest they lose what they came for,” Michaeli said.

Although Abu Huzayen was happy to be released, he is eager to attempt crossing the border once again.

“At the reformatory, I used to eat good food, make good money and receive good treatment. I need nothing more from this world.”