Many of the increasingly numerous prisoners in Gaza's only all-female jail have been convicted of "moral" crimes. 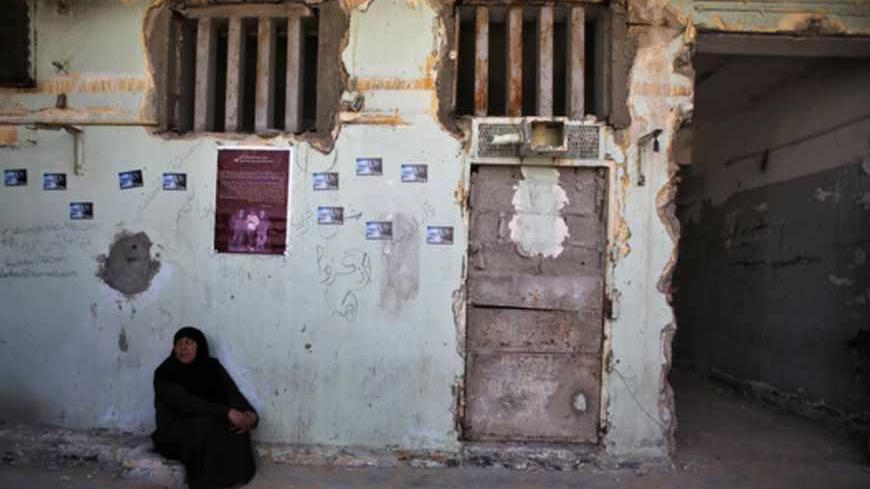 At Gaza’s only all-female prison located in the central city, dozens of detained women from across the coastal enclave remain under intense security, irrespective of the crime.

Al-Monitor gained access to this high-security, one-story facility with the permission of the Hamas-run Ministry of Interior, on condition that the correspondent be accompanied by a guard, names of prisoners are not published and that the final report was reviewed by the ministry before publishing.

For many people in Gaza, crimes committed by women are rarely heard of due to the conservative nature of Gazan society. Families of female convicts usually don’t disclose their whereabouts, and even lie about it.

The head of the prison, Jazya Abu Mousa, said that this year has witnessed the largest number of female prisoners since she began working there in 2007.

“The number changes from time to time as most of the prisoners here are detained and not sentenced,” Abu Mousa said.

Criminals in the prison are divided into three categories: thieves, security convicts of crimes often related to cooperating with the Israeli occupation and "moral" convicts, which includes prostitution or sexual relations without marriage. This final category holds the largest number of prisoners.

Abu Mousa blames the increasing number of crimes in the Strip on weak religious awareness among locals, family disintegration and the poor financial situation of most people in Gaza.

RH, 47, collaborated with the Israeli occupation along with her husband, until they were both arrested in 2010. RH’s husband was among six spies who were publicly executed and dragged through the streets of Gaza by Hamas' armed wing, the Izz ad-Din al-Qassam Brigades, during the last Israeli offensive in November 2012.

RH and her husband worked in Israel until Israel denied access for Palestinians from Gaza to enter in 2000, following the second intifada. The couple turned to the Egyptian market for survival.

As Gaza was still under Israeli occupation, RH said that her husband met Israeli intelligence en route to Egypt. There, he was offered a permit to go back to his work in Israel.

The economic situation in Gaza had become dire with Israel’s severe siege, imposed in 2007, tempting RH’s husband to cooperate with the Israelis.

“At the beginning, they told him that they didn’t want anything in return, and it was only a matter of humanitarian support, but as time passed they started asking him for information about specific people,” RH recalled.

With their father killed and their mother in prison, RH’s children found themselves alone. Her son turned to robbery and is now serving a three-year sentence in another section of the same prison. Her daughter-in-law divorced her son, as she no longer wanted to remain part of this “shameful” family.

When asked if she felt guilty for betraying her people, RH said she doesn’t believe she committed a big crime, adding that she was a victim of Israel exploiting her needs.

"The only thing I did was transfer money from Israelis to other spies in Gaza while I was going to Israel to treat my son. It wasn't a serious collaboration," she told Al-Monitor.

While RH makes attempts to engage and joke with fellow inmates, she said she remains totally devastated inside.

“My man was killed, my son is arrested and I’m away from my children; we are no longer a family. Every day I wish this were just a horrible nightmare. I still can’t believe it,” she said, struggling to contain tears.

The prison head said she is proud of most of the prisoners, as she senses a willingness among them to change. The prison administration focuses on raising religious awareness among the prisoners so they won’t return to crime after their release, said Abu Moussa.

“Besides giving them traditional training like handicrafts and embroidery, Islamic lectures are the main focus,” she explained to Al-Monitor.

When M’s husband found no source of income, as he never had a career, he resorted to drugging his wife and prostituting her for less than $15 a night.

“I only knew about what was going on when the police invaded the house and arrested us. My ex-husband used to drug my drinks. I don’t even remember the people I had sex with,” M. told Al-Monitor, embarrassed.

Prostitution in Gaza barely exists due to strict monitoring by Hamas authorities.

When M’s father discovered what her husband was doing to her, he insisted on a divorce. Six years later, she remarried and returned to a normal life until she received a phone call from one of her former “clients.” She said, “He told me he was from a humanitarian organization and that I should go to get my handout, but when I reached the place, I found it was a trap and I was arrested again.”

The “client” gestured to M to enter his apartment when she got out of the taxi to meet him. She refused and tried to escape, but nearby police saw the altercation and grew suspicious. They were both arrested.

M has so far served two years of her six-year sentence for both her previous conviction of prostitution and the latest incident. She thinks of nothing but finding a way to reach her three children.

“I was told that my children are not proud of me for what they heard about me. I wish I could hug them and tell them it was not my fault,” said M, tears streaming down her face.

Abeer Ayyoub graduated from the Islamic University of Gaza with a BA in English literature. She is a former human rights researcher turned journalist whose work has appeared in Al Masry Al-Youm, Al Jazeera and Haaretz. On Twitter: @Abeerayyoub