The popular Al-Nour amusement park offers free entry to children whose family members have been killed, wounded or arrested by Israel. 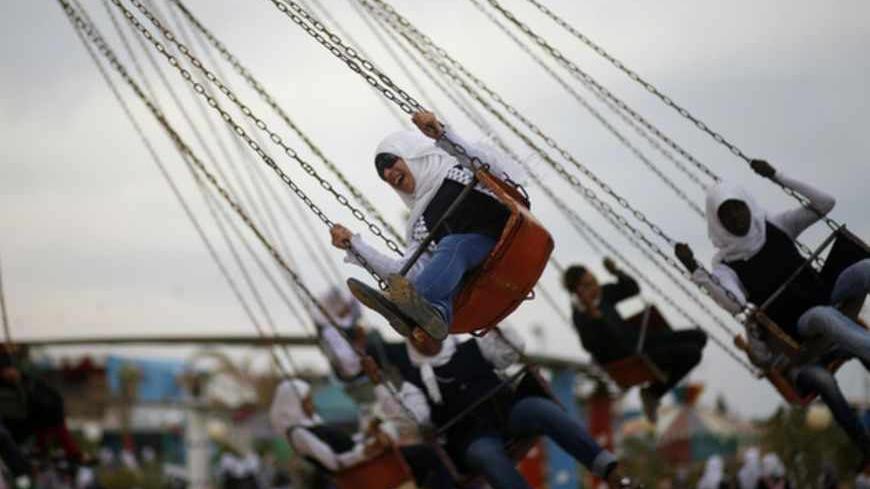 Palestinian girls ride a swing attraction inside an amusement park built on the land of a former Israeli settlement in central Gaza Strip, April 11, 2013. - REUTERS/Mohammed Salem

At Al-Nour amusement park in Gaza, the children of Palestinians killed, wounded or arrested by Israel are admitted for free.

The resort was opened by the Hamas-affiliated NGO Al-Nour three years ago. The location was a venue serving children of the Israeli settlement Netzarim before it was evacuated by former Israeli Prime Minister Ariel Sharon’s government in 2005.

Reduced to rubble like all the other former Jewish settlements in Gaza, this large patch of land now houses a large resort for Palestinian orphans. Other Palestinian children and their families are also allowed access to the park for a low price of $1.50 for each person aged over 10.

Nabil Nassar, the head of the resort, said it was specifically targeted at children who have lost a family member due to Israeli aggression, as their families have lost income.

“The place has met its goal since day one. We sometimes have no room for all the customers that come to the resort, despite its large space,” Nassar explained to Al-Monitor.

The target group includes children whose fathers, mothers or siblings were harmed by Israel, but the free access ends when the child's mother, father or sibling who lost a spouse remarries. But the resort is not stringent in its implementation of this rule, given Gaza’s high poverty rate. Some poor families will seek free admission by falsely claiming to belong to the target group, but the guards will permit them entry nonetheless, Nassar said.

“We are not a for-profit organization; making money is not our ultimate goal,” Nassar said. “The money of the tickets can barely cover the maintenance costs. We basically depend on donations,” he explained.

According to Nassar, the budget of the resort is estimated at $5 million, with new facilities being added each year. For the coming year, the founders are considering adding a restaurant and a wedding hall, which can also be used for free by the target families.

The resort's guards are responsible for registering target-group names when they enter, but the administration is considering issuing identification cards to ease that work.

The 80,000-square-meter amusement park has a grass field, a large lake, two swimming pools and an entertainment zone, but this is barely enough for the thousands of customers that visit the resort on a daily basis.

The popular resort opens from 8 a.m. to 1 a.m. daily for individuals, families and field trips by organizations and camps.

As an establishment founded by a Hamas-affiliated NGO, it is not surprising to sense the conservative Islamic atmosphere while in the resort. A large sign with specific instructions greets you at the entrance. The first command is to commit to Islamic morals, the second forbids entry to women without a hijab and the third bans hookah smoking for both genders.

Fatima, 32, who lost her husband 13 years ago when his car was targeted by Israeli warplanes, said that the park is a relief to her and her three children, as she no longer worries about where she should take them.

“It doesn’t cost us a penny when we come here. It’s exactly like the fancy places my children see on TV. They feel satisfied, like all the children in the world,” Fatima noted.

Ayman al-Aloul, a journalist there with his six children, said that he never knew that the park was specifically designed to cater to children of Palestinians harmed by Israel. He finds it a great place for everyone, saying, “The place is conservative, safe and has all the facilities I need for my children.”

Despite the offer, less than half the patrons are from the target families, as the amusement park is one of the few popular places in Gaza where families can escape the hardship of their political and economic realities.