Families of Palestinian Spies for Israel Face Stigma in Gaza

Families of Palestinians who have been caught spying for Israel suffer discrimination and isolation in their communities. 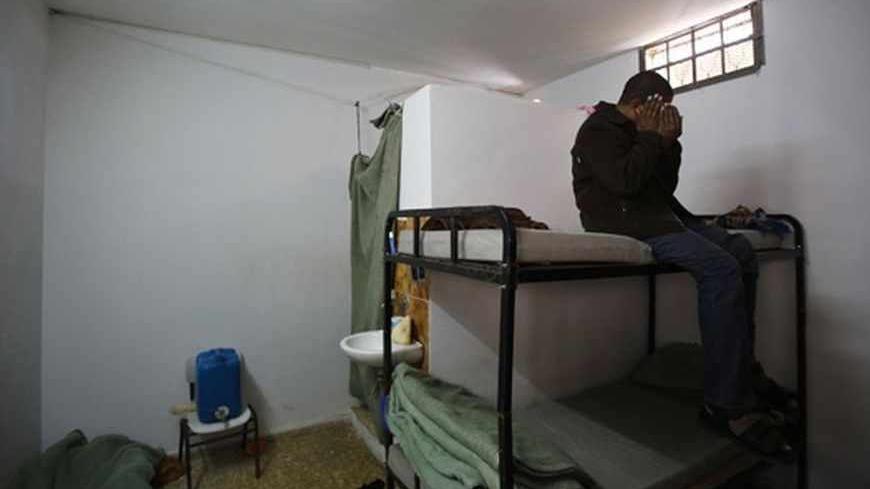 An alleged Palestinian collaborator with Israel covers his face as he poses for the camera inside a Hamas-run prison in Gaza City, April 23, 2013. - REUTERS/Suhaib Salem

In a narrow territory where almost everyone knows each other, nothing in the Israeli-controlled Gaza Strip is more scandalous than being detected as a collaborator with Israel.

Many patients and relatives of patients who regularly go to Israel to get medical treatment often complain of receiving collaboration offers from Israeli intelligence at the Erez crossing checkpoint while passing through.

Detecting and executing collaborators has always been a main mission for armed wings of both Palestinian resistance factions and governments.

During the first intifada in 1987, many suspected of collaborating with Israel were often found killed in dumps, with armed groups mainly responsible for such killings.

No matter how inhumane these killings were, spies never received sympathy from ordinary Palestinians. In fact, such killings were usually well-received with victory chants.

Since it took over the Gaza Strip in 2007, Hamas has placed finding collaborators on the top of its agenda. In March, Gaza’s Ministry of Interior launched a campaign targeting collaborators with Israel, with an offer of amnesty if they gave themselves up within a month.

While the campaign was welcomed by many in Gaza, Hamas is accused by human rights groups of torturing prisoners into confessions and executing suspects while investigations are still ongoing.

One day before the campaign was over on April 11, two related spies along with their families managed to escape to Israel, sneaking across Gaza’s northern borders with Israel.

One month later, the two spies decided to return to Gaza after their wives and children insisted on leaving Israel, yet Israeli authorities refused to let them back lest they should be killed by Hamas.

After several days of insisting, Israel allowed the families to return, but not the two spies.

E.N., 40, recounted this story to Al-Monitor on condition of anonymity. E.N., one of the wives who is heavily pregnant, said that she never knew her husband was a spy before the day they escaped. He told her that she should go with him if she doesn't want him to be killed; she obeyed out of concern for her husband.

“I thought we would be going to the West Bank, but we were taken to Acre instead. I couldn’t bear it, I preferred to come back even if Hamas wanted to punish me,” she told Al-Monitor.

But while in Gaza, E.N. struggles with the stigma of being the wife of a spy.  She does not allow her children to go out into the street, so they will not be called “sons of the spy.”

E.N.’s son, 18, dropped out of school three years ago and said that he no longer has friends, as they all left him when they found out about his father.

“I should work to earn a living for my mother and sister, but no one will employ me because no one will trust a son of a spy.”

People in Gaza never forget a name of a collaborator, no matter how old the case. The scandal of the collaborator is never buried with the spy, as the family suffers the stigma of the crime. Relatives, especially children, live in isolation.

Spying for the enemy is an unforgivable offense in the eyes of many Palestinians, and much of the guilt falls onto the families.

Fatin Salim, a 24-year-old teacher, is one of the many Palestinians supportive of harsh punishment — including the death penalty — for spies.

“Spies deserve death not only because they participated in murders, but also because they betrayed their homeland,” Fatin explained.

In November 2012, during an eight-day offensive Israel waged on Gaza, six suspected spies were taken out from prison and killed publicly in Gaza City, without most of them receiving their sentence. Hamas’ Al-Qassam Brigades claimed responsibility for the killings.

Bilal Abadsa was one of the six killed in November; he was 25 years old at the time. His mother, Om al-Abed Abadsa, told Al-Monitor that her son was an honest man who would never think of collaborating with Israel.

Bilal worked in the smuggling tunnels bordering Egypt, and was detained by internal security in May 2010 without a warrant. After three months in detention, Bilal’s family was granted access to see him. He was in poor health with torture symptoms all over his body, according to his mother.

Recounting with a distinct sadness on her face, Abadsa said that her family received support from the community, including her neighbors who would never believe that Bilal would spy for Israel.

“He was killed before seeing his first baby grow up. My beloved, may Allah bless his soul,” Abadsa said, tears streaming down her face.