Palestinian rights groups have called on Hamas to cease harassing Fatah members, after several were detained in Gaza in recent weeks. 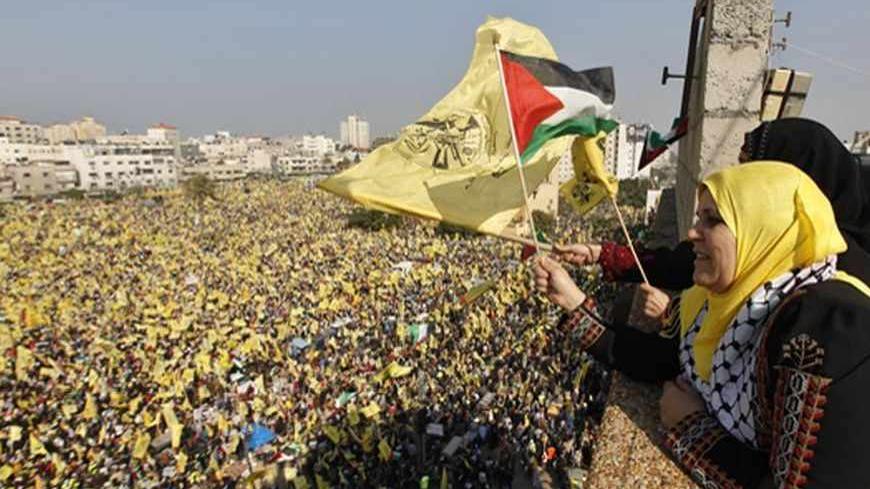 Women wave Palestinian and Fatah flags during a rally marking the 48th anniversary of the founding of the Fatah movement, in Gaza City, Jan. 4, 2013. - REUTERS/Mohammed Salem

In another sign that Palestinian reconciliation is nowhere on the horizon, Hamas' internal security services (ISS) have summoned and detained dozens of Fatah activists across the Gaza Strip over the past few weeks, according to the Gaza-based Palestinian Center for Human Rights (PCHR).

"The campaign started with summons that were sent to the majority of the arrested persons to refer to the ISS head office each in his area and/or arrest them from their houses. ... [It] targeted a number of Fatah leaders, including current and former province secretaries, area secretaries and other members. The arrested persons were questioned about giving money to families of Fatah members who were wounded or killed during the events of June 2007," the PCHR stated in a media release issued on Aug. 13.

A Fatah member and former government employee who spoke on the condition of anonymity told Al-Monitor that he was summoned on Aug. 19 to the ISS office in his area.

The activist said he was expecting the summons after his colleagues were also called in, and he went to the ISS in the evening. He told Al-Monitor he was interrogated about his previous work, and whether he was still on the payroll of the West Bank-based Palestinian Authority. He was also asked about being a fan of a "Tamarod" Facebook page in Gaza.

"They were checking my Facebook timeline during the interrogation, they asked about my posts and Fatah leaders' photos on my page. They beat the back of my foot until it turned blue," said the activist, who had plaster on his foot and showed a medical report proving its swelling.

Recently, many Facebook pages with various agendas were established calling for a movement similar to that of the Egyptian "Tamarod," which led to the ouster of Muslim Brotherhood President Mohammed Morsi. As reported by Al-Monitor's Hazem Balousha on Aug. 13, Hamas is keeping a watchful eye on activists who might be involved in such movements.

Islam Shahwan, the spokesman of Gaza's Ministry of Interior, denied to Al-Monitor that his government was targeting Fatah activists in Gaza.

"We haven't arrested any Fatah members. Fatah is trying to spread such rumors to turn people's attention away from its scandalous leaked documents and its return to negotiations with Israel," Shahwan said in a phone interview.

Earlier this month, and as reported by Al-Monitor's Adnan Abu Amer, Hamas revealed leaked documents that sought to prove Fatah was part of the incitement campaign in the Egyptian media that targeted Hamas. Fatah insisted the documents were fabricated. Responding to the feud with Hamas, Ramallah-based Fatah government spokesman Ahmed Assaf said that he is not really surprised by Hamas' behavior toward the movement.

"It's not only our members in Gaza who are subjected to Hamas violations, more than 1.5 million Palestinians in Gaza are being held hostage by a de facto government that's isolating them from the West Bank," Assaf told Al-Monitor in a phone interview.

"If Hamas calls negotiations a scandal, why does it accept to be part of the Palestinian parliament, which was a main result of the negotiations with Israel?" Assaf questioned.

The rift does not end there, with Fatah accusing Hamas of issuing an arrest warrant for senior Fatah leader Yahya Rabah after he sharply criticized Egypt’s Muslim Brotherhood on his Facebook page. From his new residence in Ramallah, where he recently moved, Rabah told Al-Monitor that he regrets Hamas' decision.

"Hamas could respond to me by expressing its point of view instead of instigating people against me in public speeches and mosques during Friday prayers," Rabah argued.

Rabah also said that he can't see any imminent reconciliation agreement between the two factions, as reconciliation is no longer a priority for Hamas.

"Hamas is not ready to return to reconciliation talks as it's busy following the news in Egypt and the Muslim Brotherhood," Rabah added.

"We neither deny nor confirm it, we will deal with Rabah's article according to the law."

"Everyone is free to write whatever they want, even when we disagree with the content, as long as it's not harming the Palestinian national interest," Ghussein told Al-Monitor.

On Aug. 21, the Al-Mezan Center for Human Rights called on Hamas authorities to cease its growing interrogation and detention campaign and respect the law.

"The information the center has gathered says that 40 people were summoned in July and August 2013, 11 of them were detained and six are still detained," the press release read.

The Fatah government is also frequently accused of detaining Hamas supporters in the West Bank, but Assaf, resorting to the same justifications deployed by Hamas, stressed that these are criminal matters, not political.

"We are a government, and we should stop anyone who might think to create chaos," Assaf said.

However, the mutual accusations did not stop a Fatah delegation from visiting Gaza earlier this week to discuss the latest updates on reconciliation with Hamas officials. Hamas government spokesman Sami Abu Zuhri told Al-Aqsa television on Aug. 19 that it was a routine meeting, although no agreements were made. Zuhri denied the meeting was a failure, adding there was not much emphasis on reconciliation during the talks.