Illegal crossings by Gaza's youths have been increasing despite the fact that those who cross are almost always detained by Israeli forces. 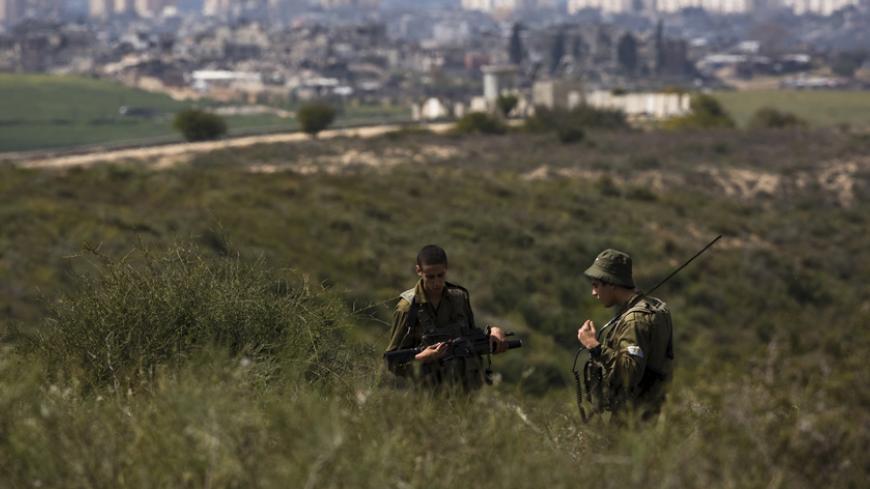 Israeli soldiers take part in a surprise drill near the border with the Gaza Strip (seen in the background), launched to maintain the readiness of the forces in the area, March 22, 2015. - REUTERS/Amir Cohen

RAFAH, Gaza Strip — Palestinians in the Gaza Strip have been illegally crossing the eastern border into Israel for years. Yet, what was once a rare phenomenon has now transformed into an almost daily occurrence. Palestinian youths hope to find a better life and jobs across the border, or even obtain refugee status, but they are almost always detained by Israel. Regardless, more and more youths are risking their lives to sneak across the border.

In east Gaza's Maghazi refugee camp, 15-year-old Ismail, a pseudonym, tried to sneak into Israel as a way to escape his family's difficult financial and psychological situation.

Ismail’s aunt, who raised him after his father’s death in 2006, told Al-Monitor, “He would come to me every day with ‘heroic’ stories about his attempt to cross the wire demarcating the border with other boys from the neighborhood. I tried to discourage him, but he wouldn’t stop trying.”

According to Ismail, his attempt a few weeks ago was the last. “That day, the border was scary. I was trying to cross the border alone to find a job, since I don’t want to finish my studies at school. I went out after sunset heading toward the border wire. However, suddenly the night lit up with gunfire. Miraculously I survived, and I won’t try this again.”

Ismail declined to reveal further details to Al-Monitor, but his aunt said, “He began thinking about sneaking into Israel after he heard about his uncle’s attempt. His uncle crossed the border and was arrested in December 2014 and sentenced to 11 months in prison.”

“His uncle had been arrested by the police in Gaza three times since 2007, although he was never charged with anything. As a result of the torture, his psychological condition worsened by the day. This was exacerbated by his poor economic situation, and for this reason he has not married to this day,” she said.

Ismail’s aunt supports the entire family, which consists of Ismail, three brothers and her three nephews, whose father died. “We live on the stipends paid for orphans, because we have no source of income,” she said.

Yasser, 40, a resident of the border region east of Rafah, told Al-Monitor, “When the youths get together, most of those from the border region urge the others to cross the border. They even make plans to try this together, in pairs, searching for opportunities for a better life. They’ve simply lost hope of any improvement in living conditions in the Gaza Strip.”

“Even if they do not get a chance to work, they seek the payments that could be made by the Palestinian Authority or Hamas to their families after their arrest, thus benefiting their families,” Yasser said.

When Al-Monitor left the Maghazi camp, Ismail’s aunt asked, “Do you know about any payment or compensation for those that cross the border? How can I take advantage of the indictment I obtained from a lawyer at a human rights center?”

According to the Al Mezan Center for Human Rights in Gaza, 159 Palestinians from Gaza have illegally crossed the border over the past four years, including about 79 children. Some were arrested and sentenced to prison terms of six months or more, and others were lucky and released from prison after a few days. However, the center does not yet have complete data for crossing attempts in 2015.

Yet, the Israeli army has noted that illegal crossing attempts increased significantly following last summer’s war, by about 25%. Between September and December 2014, 66 young men were arrested while trying to cross the border, compared to the 13 monthly detentions in the period before the war. About 170 Palestinians attempted to cross the eastern border in 2014.

The Hamas-affiliated al-Majd website reported that some of those who crossed the border did not do so spontaneously but were rather paid to do so by "suspicious persons," as the website calls them. Al-Majd quoted a Hamas security source: “The security authorities carried out investigations with a number of infiltrators who had been incited and brainwashed by suspicious persons to go toward the security fence, for many reasons, most notably to search for work or to escape in order to get the sympathy of human rights organizations after their release.”

Al-Majd also stated that after their detainment by Israel, these individuals were approached by Israeli forces to work with them as “collaborators” to obtain information about the resistance.

Al-Monitor attempted to speak with a man whose three sons had attempted to cross the border east of Rafah, but he refused, citing security reasons. Israel arrested the three youths on separate occasions over the past few months. A relative told Al-Monitor on condition of anonymity that, "the Israeli authorities sentenced the young men to prison” on charges of “belonging to and helping resistance factions.” The relative added, “The Israeli authorities also claimed that one of them had a grenade in his possession.”

Mohammed Salah's son Ahmed, 20, is being detained on charges of attempted infiltration. Mohammed said that he went to search for his son after he had been gone for a while. Ahmed had rode his donkey to pick lemons on the land that Mohammed rents out east of the Maghazi refugee camp. He was shocked when the neighbors told him that Ahmed had been arrested on suspicion of trying to cross the border.

Mohammed denied that his son had tried to cross the border. “My wife and I are government employees. We do not need the money. According to what I heard, Ahmed happened to be [near] the border after the resistance clashed with Israeli forces. Thus, they thought he was [involved in the clashes] and shot at his feet, wounding him and killing the donkey that was with him. They then arrested him this past February.”

Palestinian government security agencies declined to comment on illegal border crossings, as did the Izz ad-Din al-Qassam Brigades. As for human rights organizations, their work is limited to obtaining indictment lists and following up on visits by families to their detained children. The families’ hearts are torn by their children’s conditions, as their future and present is now lost at the border of the besieged Gaza Strip.