Why cemetery-dwelling Gazans fear the living, not the dead

A cemetery in central Gaza City is home to dozens of families, who receive only minimal aid from the Ministry of Social Affairs. 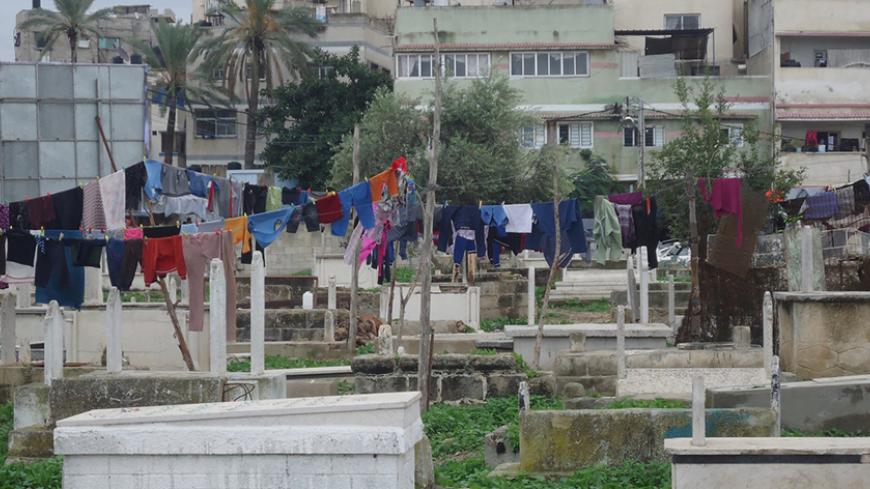 GAZA CITY, Gaza Strip — Life is hard for the children living in the Sheikh Shaaban cemetery in central Gaza City. They were born here, among the dead, and their home is between the graves. The smiles on their faces hide fearful stories.

The cemetery sprawls over two large areas. The eastern and western sides are split by an asphalt street that runs through Gaza City.

Signs of misery mark the faces of the children playing among the graves. Although they are all under 12, they look much older. Around 22 families live in the cemetery, amounting to over 150 people, the majority children and elderly.

Mohammed, a 10-year-old in a school uniform, mistook us for a charitable institution. As soon as he spotted us he said, “Write down my father’s name so we would get aid. We don’t have food at home and the rain has entered the house.”

Mohammed and his peers wait for a deceased person’s family to come bury them in the cemetery, or for a family to visit their dead. The children rush to offer help, such as bringing water for the flowers on the graves, in return for a shekel or two (20 to 50 cents).

Another resident, 30-year-old Saber Kahil, works as a gravedigger for a small allowance from the families of the deceased. He told Al-Monitor that his family is from Gaza City, and has been living in the cemetery for over 70 years in horrible conditions. Poverty drove his family to live in the cemetery and later to work as grave diggers, a job that passed on through the generations. “My wife, four children and I live in [a] house with an area of 60 square meters. But I cannot really call it home because it is not fit for life; it is inside a cemetery that is considered a Waqf property,” he explained.

Saber’s father, 65, lives in a dilapidated room in his son's house. The rest of the house, where the others live, is contaminated with foul odors as a result of people raising livestock and dogs within the cemetery grounds with no means of waste disposal.

The area is also used as a hideout for criminals. Saber noted that his wife and children often wake up in the middle of the night to the sounds of police officers chasing drug dealers, who hide behind the cemetery’s walls. “The foot chases often ... pass over our roofs, as the height of the houses are only slightly above the level of the cemetery. This terrifies my family,” he told Al-Monitor.

“We do not fear the dead; they do not hurt us and they are peaceful neighbors,” he continued. “They welcomed us among them. We hang our laundry between their tombstones, while our children play at their graves and they do not complain. We do, however, fear the living. We fear the drug dealers and alcoholics who take refuge in the cemetery.”

Saber pointed that illnesses are common among his children and the rest of the population in the cemetery, such as scabies as well as psychological disorders.

Ali Qassem, a 35-year-old father of five, said poverty in Gaza also drove his family to live in the cemetery for decades. He told Al-Monitor that he and his children beg from the visitors to the graves.

“Our life is worth nothing here. We do not feel alive. We live next to the dead and our situation is exactly like theirs. We live in houses similar to graves. But at least graves protect the dead from the rain and the heat. Our homes sink during winter rains, and we suffer from extreme heat during summer,” he added.

The people in the cemetery live in houses made of sheets of tin, plastic and some stones. Many are roofless, and they are prone to collapse at any time given the poor quality of construction.

Undersecretary of the Ministry of Social Affairs in the Gaza Strip Yousef Ibrahim explained to Al-Monitor that his ministry provides as much aid as it can to these families, based on an evaluation of each family’s situation. Large families whose living conditions are very poor get more assistance than smaller families whose conditions are better.

“Our assistance does not change the families' situation,” he added, “as we are not responsible for providing them with different houses, which is the job of the [Ministry of Public Works and Housing]. Our mission is to only provide some aid and financial assistance, nothing more.”