Child workers in Gaza's cemeteries struggle to provide for their impoverished families. 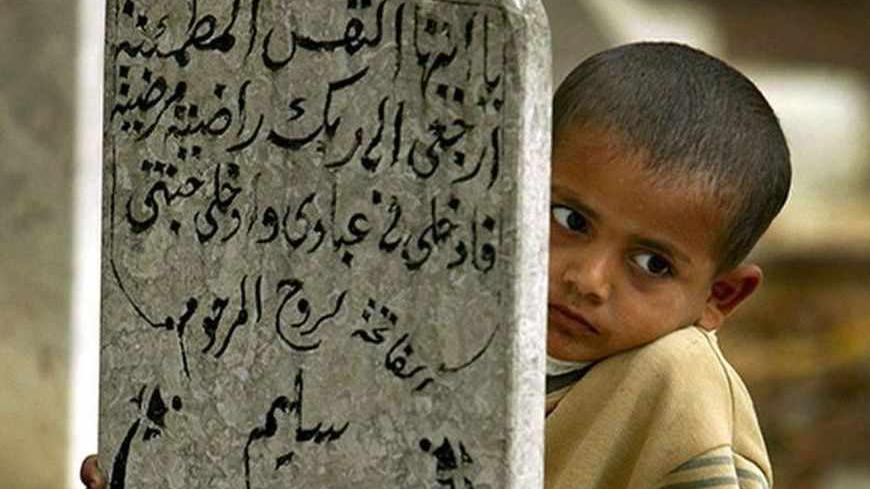 A Palestinian boy looks from behind a tombstone at the El Shohada cemetary outside Gaza city on November 25, 2003. - REUTERS

Mahmoud, a 12-year-old Gazan boy, spends more than nine hours a day between the graves of the Sheikh Radwan cemetery in the center of Gaza City. He stares at the cemetery gate, waiting for a grave visitor or funeral procession.

Mahmoud offers to keep the tombs of the deceased clean and planted with flowers in exchange for a small sum. He does this to avoid problems with his father, who beats him and threatens to kick him out of the house if he doesn’t collect enough money by the end of the day.

Mahmoud, who appears to be extremely tired, wanders among the graves, carrying a small bucket of water in one hand and a bouquet of roses in the other. He sprays water on graves and removes the grass from around the tombstone to plant flowers instead.

While spraying water on a marble tomb that appears to be new, he told Al-Monitor, “My father took me out of school two years ago. He told me I am only supposed to work, and forced me to come to this cemetery every day to ask visitors for money in return for taking care of the graves of their loved ones on a regular basis.”

There are many children in the Sheikh Radwan cemetery who have the same job as Mahmoud, creating competition to attract visitors. This led Mahmoud to devise new ways to attract as many visitors as possible.

"When a funeral procession arrives, I can tell which person will pay the most among all mourners. Whoever has a look of sadness on their face and is crying, this is my primary target. Such people were certainly very close to the deceased, and they cannot reject paying me to take care of the grave,” he added.

Mahmoud explained that his work does not cost him any money. He brings water from mosques located near the cemetery, and gets his flowers from florists' leftovers.

Visitors give Mahmoud five Israeli shekels ($1.40) in exchange for taking care of the grave of the deceased. From time to time he gets lucky and receives 100 shekels [$28] from a visitor, usually in cases where the deceased was an important man or belonged to a rich family.

“My work depends on luck and on the relationship between the visitors and the deceased lying in their grave. Sometimes I go home with 70 shekels [$20], and there are a few happy days when I collect more than 200 shekels [$56],” he said.

This work, according to Mahmoud, provides for the seven members of his family who live in a rented house. His father is unemployed and suffers from a serious injury, forcing him to stay at home. Being the eldest son, this prompted him to leave his studies and focus on providing for his family.

Besides Mahmoud, there are dozens of other children scattered among the rows of tombstones doing the same job. They are driven by different circumstances and reasons. Some of them lost their fathers, who left behind children without a home. This is the case of 13-year-old Mohsen and 14-year-old Susan.

Mohsen, unlike most children of his age, has large muscles. He brings water and roses to the cemetery on a continuous basis. Susan, for her part, sprays water and plants roses. Together, they work to provide for their family, which includes their mother and three other siblings.

While washing her face after a long day of working under the scorching sun, Susan said, “Our work largely depends on visits. When visitors arrive, we try to persuade them to count on us to keep spraying water on the tomb of the deceased, especially in light of the high summer temperatures.”

Al-Monitor asked Susan, who was collecting her stuff to leave the cemetery: “Aren’t you scared; working among the graves and the dead?”

“I used to be afraid at first, when I would go to sleep I would have very worrying nightmares, but then I got used to it. I started to fear begging and poverty, that's all,” she replied, casting an innocent smile.

The Palestinian Law on Children No. 7 of 2000, prevents children under the age of 15 from working. Article 14 states that “the employment of children before they reach the age of 15 is prohibited.”

According to the International Labor Organization (ILO), “The rate of unemployment in the Palestinian territories rose by 3.15% between 2011 and 2012, bringing the rate to 23%. The situation is even worse in the Gaza Strip, where the unemployment rate reaches 31%."

Walid Mesbah, a social psychology specialist, said that difficult living conditions, increasing prices, unemployment, poverty and the loss of the family provider are all factors that prompt parents to push their children to work in various areas, including in the cemeteries, to make money.

In an interview with Al-Monitor, Mesbah said, “These abnormal jobs are driven by compelling reasons and are usually practiced under difficult circumstances that put workers at risk and make them go through hardships, such as selling chewing gum or cleaning cars in the streets.”

He said that parents force their children to work in this business to get their family out of poverty and to avoid shame. They believe that these occupations do not suit the parents and would degrade them socially.

Concerning future repercussions that could threaten the lives of those children, Mesbah said, “Child labor, especially within a business community that socially degrades them, destroys their personalities and fills them with concerns, tension and self-doubt.”

He said parents are the first to blame for child labor, and the Ministry of Social Affairs and civil society organizations are second to blame. He stressed the need to provide them with better care and offer work to their parents in order to combat this phenomenon.

For her part, Iman Adwan, the Director General of the Family and Child Department in the Ministry of Social Affairs, said that her department “does not have any data or clear statistics on child labor in cemeteries, but that will be part of our concerns in the future.”

Adwan confirmed in an interview with Al-Monitor that her department is making great efforts to solve the problem of child labor. It is trying to find the causes that prompted them to work in difficult circumstances, provide jobs to the head of the family, and bring them back to school.