Gaza attempts to deal with beggars

The Ministry of Social Affairs recently launched a campaign to curb the begging phenomenon quickly spreading in the Gaza Strip, but critics say this is not the solution to the problem that should be resolved at the source. 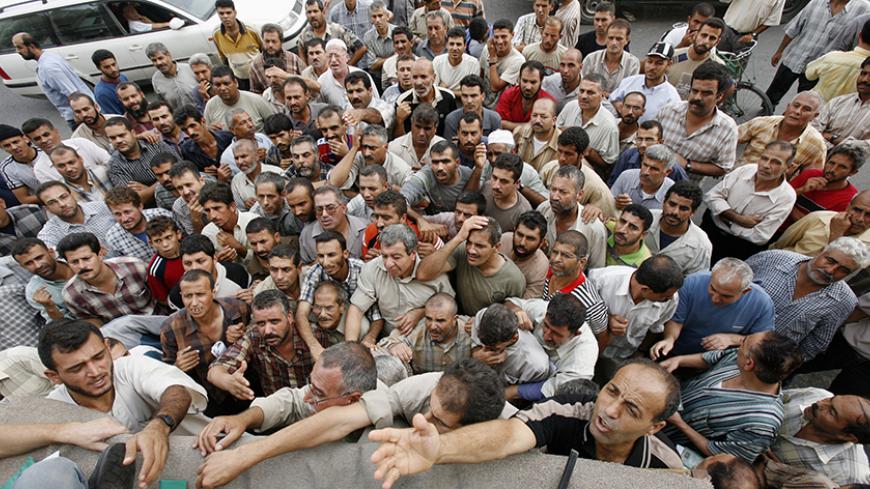 GAZA CITY, Gaza Strip — On May 24, the director of Legal and Regulatory Affairs of the General Investigation Department of the Palestinian police in the Gaza Strip, Imad Harb, announced in a press statement to Safa Press Agency the arrest of 72 beggars, including 42 children in the streets of Gaza. The arrests were part of the campaign launched May 8 by the Ministry of Social Affairs in Gaza in cooperation with the Palestinian police and the Ministry of Culture to fight begging and arrest beggars in Gaza’s streets.

Harb said in his statement that the problem of beggars is being addressed by making them sign pledges not to return to the streets after their arrest. In case the beggar returns to panhandling, the necessary legal measures will be taken for violation of Article 193 of the 1936 Palestinian Penal Code. According to this article, begging is an illegitimate source of income, and beggars are punished with a one-month prison sentence the first time they are caught and a one-year sentence the second time.

However, this campaign has sparked controversy in the Palestinian street, as some questioned its effectiveness in light of the poor living conditions and the government’s failure to address its causes, namely the high poverty and unemployment rates.

Meanwhile, some believe that this campaign is important given that there are panhandlers who are not in need and who have just opted for begging to make money.

According to statistics from the Palestinian Central Bureau of Statistics published Feb. 11, the unemployment rate in the Gaza Strip reached 38.4% during the fourth quarter of 2015, as opposed to 18.7% in the West Bank during the same period.

Yousef Ibrahim, the undersecretary of the Ministry of Social Affairs in the Gaza Strip, told Al-Monitor, “Begging is a phenomenon rejected by society. It does not emanate from poor economic conditions, but is motivated by the desire to illegally acquire wealth.”

He added, “This is why we launched the anti-begging campaign and are arresting beggars with the aim of bringing them to the probation officer in the ministry, who in turn examines the extent of their need to receive aid. Those who are deemed in need of assistance have their names added to the financial assistance list of the ministry and they are asked to sign a pledge not to return to begging. In case they do return to begging, they are held legally accountable.

Ibrahim said that his ministry is granting financial and in-kind periodic assistance to about 76,000 poor families in Gaza. Each family receives one payment every three months. The payment ranges between 700 and 1,800 shekels ($185-$475), depending on the number of members in a family.

According to Ibrahim, the main criterion to give families periodic financial assistance depends on the lack of income or support. The ministry also grants financial aid to marginalized and weak social groups that do not have a source of income, such as widows, divorced women and the elderly.

Although the campaign was launched more than a month ago, panhandlers are still widely present in Gaza’s main streets, such as Rammal Street where pedestrians often are asked for money.

Al-Monitor met one of the beggars who had been detained as part of the anti-begging campaign. Umm Khalid, 38, was released after a pledge not to return to begging. Yet, she was forced to continue asking strangers for money.

Umm Khalid, who begs in the streets wearing a veil covering her face, said, “According to the police I'm not in need, and I only opted for begging to make money. But when I asked them to offer me a job, they did not respond and asked me to sign a pledge promising that I would not return to begging or else I would be arrested and imprisoned.”

She explained that her husband has been unemployed for about seven years after being injured in a car accident. Because he is bedridden and can't work, Umm Khalid was forced to beg in the streets to provide for her family of six.

She said neither the police nor the Ministry of Social Affairs promised to grant financial assistance within the framework of the ministry’s relief programs for poor families. “Had I been getting financial aid, I would not have had to beg every day,” she said. “The Ministry of Social Affairs does not think my family is poor because one of my children who is 18 works at a car repair shop. He earns 350 shekels [$95] per month. But this is barely enough to pay for our food for 10 days."

Children are found begging on the streets of Gaza, too. Passers-by are sometimes harassed by child beggars who block the way of especially women and female college students and ask for money. If no money is offered, the children start harassing the pedestrians, either verbally or by throwing sand at them.

Khalil, 12, and his brother Fayez, 10, wait at the gate of the Bank of Palestine in central Gaza City, to beg customers leaving the bank for money.

“My father lost his job after Israel destroyed the factories during the recent war on Gaza in 2014, and he severely beats us if we return to the house with less than 40 shekels [$10] a day. This is why our actions may become hostile toward passers-by after the sun has set and we haven't collected that amount yet,” Khalil told Al-Monitor.

Khalil heard about the anti-begging campaign on the radio while begging for money in one of the popular cafes. “I am not afraid of this campaign, but I'm trying to escape the police for fear of arrest,” he said.

Legal expert Salah Abdel Ati said that the 1936 Penal Code is outdated and is not relevant to the current developments in the Gaza Strip, stressing the need to provide beggars with economic and social guarantees.

Abdel Ati told Al-Monitor, “We must fight the causes behind begging before fighting the phenomenon itself. This phenomenon is mainly driven by high poverty and unemployment rates and can be prevented by including beggars on the lists of beneficiaries of the programs of [the Ministry of] Social Affairs as well as helping them financially by providing them with job opportunities.”

Derdah al-Shaer, a professor of sociology at Al-Aqsa University in Gaza, agrees with Abdel Ati and told Al-Monitor that the phenomenon of begging should be fought through the provision of job opportunities and the inclusion of beggars in different local relief programs.

“As long as the problem of unemployment remains unsolved, this phenomenon cannot be eradicated,” he said.