Many Gazans are turning to fraud to obtain assistance

Harsh economic conditions are forcing many Gazans to use deceptive methods to obtain aid, otherwise reserved for pregnant women, unemployed breadwinners and refugees. 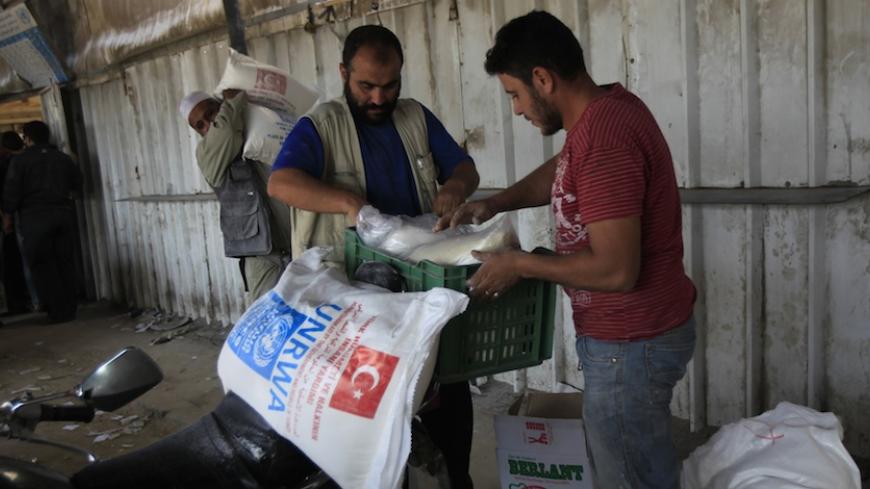 GAZA CITY, Gaza Strip — The aid programs of international and local organizations that provide financial and food assistance to Gaza residents are essential. But to be eligible for aid certain conditions must be met by Gazan families. For instance, the family’s breadwinner must be unemployed or disabled, and some aid only applies to pregnant women or Palestinian refugees.

As a result, Gazans to whom the eligibility requirements do not apply have been looking for other ways to be considered for assistance, in light of the deterioration of living conditions and the lack of sources of income and employment.

Faten is four months' pregnant and lives with her husband and family in a school in the northern Gaza Strip, after the 2014 war left them homeless. She has become a resource for a number of women who wish to receive financial aid, which is offered as a one-time payout of $200 by private relief organizations to pregnant women only. Some women have begged Faten for a sample of her urine so that they can use it as "evidence" of being pregnant.

“I gave urine to a few women who came to me with small containers and asked to obtain a urine sample from me, in exchange for 50 Israeli shekels [$13] each. At first, the matter bothered me, but I eventually I agreed,” Faten told Al-Monitor on condition only her first name be used.

She said that she eventually agreed to enable these women to receive aid at a time when families in Gaza need food, and material and psychological support.

In August 2014, Australia provided 10 million Australian dollars (roughly $7.6 million) as aid to the Gaza Strip through the United Nations Relief and Works Agency for Palestine Refugees in the Near East (UNRWA) and the International Committee of the Red Cross. Priority was given to women and children, especially in regard to health care for pregnant women.

To obtain unemployment assistance, Fayez, who was a government employee, applied for aid from an organization that provides food subsidies to unemployed heads of household by forging paperwork showing that he had no income.

Fayez, who spoke to Al-Monitor on condition his full name not be used, justified what he had done by saying, “I have not received my full salary for more than two years because of the political disputes between Fatah and Hamas and the refusal of the unity government to pay the salaries of employees appointed by Hamas in 2007. Despite being a government employee, I cannot meet the minimum needs of my family and children. I think that all of Gaza's residents need such assistance, which, if it stops, will fill the streets with thousands of beggars.”

On Feb. 26, 30 international relief agencies published a joint statement on UNRWA’s website expressing concern about the limited progress in rebuilding the lives of Gaza’s residents.

The statement said that most of the population is unable to meet its food needs and that the siege, which has lasted for more than seven years, has severely damaged the ability to access basic services, including health care, water and sanitation.

Marrying a refugee in the Gaza Strip is another way to get access to international aid. Ayman al-Ajla chose to marry a girl from a refugee family to obtain food, education and health care assistance from UNRWA.

“My family is suffering from tough economic conditions, but they are not refugees from anywhere," he said. "And this prevents me from receiving aid from UNRWA. So I married a refugee to obtain aid, which greatly eases the cost of living. In the future, I will be able to register my children at UNRWA schools without paying any fees and receive all educational services for free, unlike in government-run schools.”

Economic expert Moeen Rajab told Al-Monitor: “The fact that some families are resorting to such methods in order to qualify for assistance demonstrates that the continuing deterioration of the economic conditions is affecting all of Gaza’s residents. … These behaviors reflect the lack of justice in the distribution of aid to the needy.”

During a meeting with the members of the Foreign Affairs Committee of the European Parliament in Brussels, UNRWA Commissioner-General Pierre Krahenbuhl said on March 2, “The number of people who need UNRWA assistance in Gaza to ensure their livelihoods since the siege began rose from 80,000 to 800,000 people.”

For his part, Rajab said, “The aid received by Gaza from international organizations is not enough to cover the needs of all its inhabitants and does not provide a decent level of living standards and food safety,” pointing out that stopping the assistance programs under any circumstance will be disastrous on social and economic levels.

He said that the aid received by Gazans is the result of the Israeli siege and the wars, which eliminated income sources and livelihoods, and that the people of Gaza are in dire need of this aid until the Israeli occupation ends, and until a political and economic independent Palestinian state is established.

The UNRWA statement also stated that “the international community is not providing enough aid to Gaza.”

Rajab added, “The hostilities between the resistance factions in the Gaza Strip and Israel will definitely resume if no progress is made and if the root causes of the conflict are not addressed.”