Widespread poverty in the Gaza Strip has forced some of the most desperate to dig through dumpsters to feed their families. 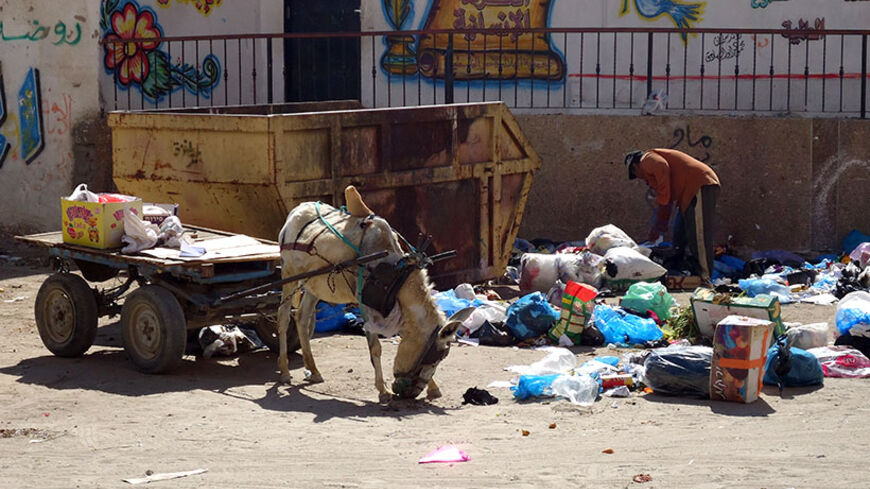 GAZA CITY, Gaza Strip — Khalil, 32, was left with no choice but to dig through garbage in search of anything to feed his two children. His university degree in journalism and media communications and his experience as a writer and TV director did not help him find a job in line with his skills and degree.

When Khalil (not his real name) rummages through a garbage bin, his quest is not limited to pieces of plastic and aluminum, which he transports on a donkey cart to sell. He also searches for food that he deems fit for consumption.

Khalil, who graduated eight years ago from Al-Aqsa University in the Gaza Strip, told Al-Monitor that he has worked with many local and international media institutions. But after his temporary positions at these institutions ended, circumstances led him to dig through garbage. “Despite constantly searching, I was unable to find new employment, and this job does not require any capital or references. The government is aware of our situation — us dumpster divers — but does nothing about it. As a result, my monthly income is less than 300 shekels [$86].”

Khalil could not have known that his university degree and experience would become useless as unemployment spread in the Gaza Strip, courtesy of the economic crisis brought by the Israeli-Egyptian siege. It led to him making dumpster diving his “profession.” He said, “I have been at this job for the past six years in the hope that it would prevent me and my children becoming destitute and hungry. I only resorted to it after losing hope. Now I see many of those suffering from similar financial circumstances drudging at this, as I do. I have met many of them and we have become friends.”

At another corner, in the affluent Tel al-Hawa neighborhood, several people were dumpster diving. Poverty and need drove them to search for their livelihoods in these dumpsters in the hope that local inhabitants had left them something to salvage.

A woman in her late 20s, accompanied by her brother, ferried vegetables on their donkey cart. When asked about the produce’s source, the woman hesitantly replied, “From the dumpster. We found it on the edge, and it is still fit for consumption.” She abruptly ended the conversation.

Fathers bring along their children in search of sustenance. Amjad (also not his real name) dumpster-dives every morning to earn a few shekels. “I bring my children along to help me during their annual vacation. Yet, I only earn around five shekels per day [$1.44],” he told Al-Monitor.

While we spoke with Amjad, his two children approached with a container of expired canned food, an indication that much of what they find and eat is unfit for human consumption.

We saw men, women and children rummage through garbage without protection, indifferently digging in refuse. When we asked Amjad, who has been doing this for the last 10 years, about diseases he may have caught, he replied, “I have never been sick!”

Finding dumpster divers is not difficult. One need only stake out garbage containers to observe the many people who come and rummage through their contents.

Hosni (also a pseudonym) is one of those people. We met him in another neighborhood of Gaza City as he collected and transported plastic, livestock feed other saleable items retrieved from dumpsters. He said his profession is fraught with health dangers, as he digs unprotected through everything he finds. 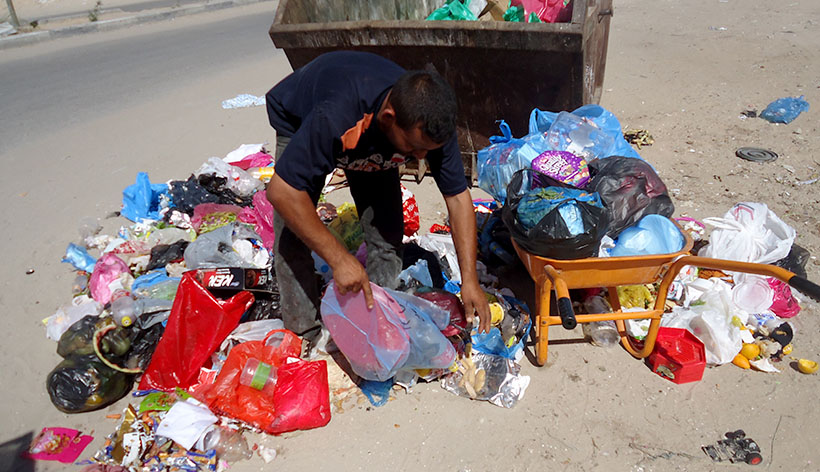 Hosni told Al-Monitor that his monthly income does not exceed 500 shekels ($144) and that he has seen a lot of dumpster divers looking for discarded food. “Some look for food and have no problem taking whatever they find in the dumpsters to their wives, who prepare and serve it," he said. "That is simply not a normal situation.”

Poverty drives thousands of families to jobs that are unsafe and do not generate adequate incomes, such as dumpster diving. Data from the Palestinian Central Bureau of Statistics show that Gaza’s poverty rate has reached 38.8% of a population of 1.85 million, which means that the number of Gazans in poverty has exceeded 700,000.

Director-General of Social Security at the Ministry of Social Affairs Riyad al-Bitar explained to Al-Monitor that his ministry runs a number of programs to help the poor. “The main program involves the disbursement of monetary aid, while a second provides rations and a third free health insurance," he said. "There are also other developmental programs that take the form of small business assistance, among others.”

Bitar indicated that the programs offered are relief-oriented. Yet, the aid only assists about half of Gaza’s poor families. “We currently service 65,000 families in Gaza, or half of those who fall below the poverty line. The allocation of funding for these projects is the determining factor in the number of families that we actually provide relief for.”

Poverty researcher Mohamed Nassar said that the aid, relief and educational and health services received by poor families through the Ministry of Social Affairs or the UN Relief and Works Agency for Palestine Refugees in the Gaza Strip only satisfied the needs of half of Gaza's poor families. He reached that number by calculating the cash value of such aid and services and comparing it to figures from the Palestinian Central Bureau of Statistics on living standards as indicated by consumption patterns.

Nassar explained that this situation has driven poor families to search for additional sources of income, saying, “One of those means involves the collection of plastic and metal from discarded waste, either by the head of family or, often, by children.” He further asked the Ministry of Social Affairs and other social services institutions to establish small projects that enable families to achieve self-reliance.

Until that happens, the poor will resort to dire measures to keep their families fed.

As Khalil put it, these people are “making the best of a really bad situation.”