The harsh economic conditions in the Gaza Strip has led to an increase of child beggars in cemeteries. 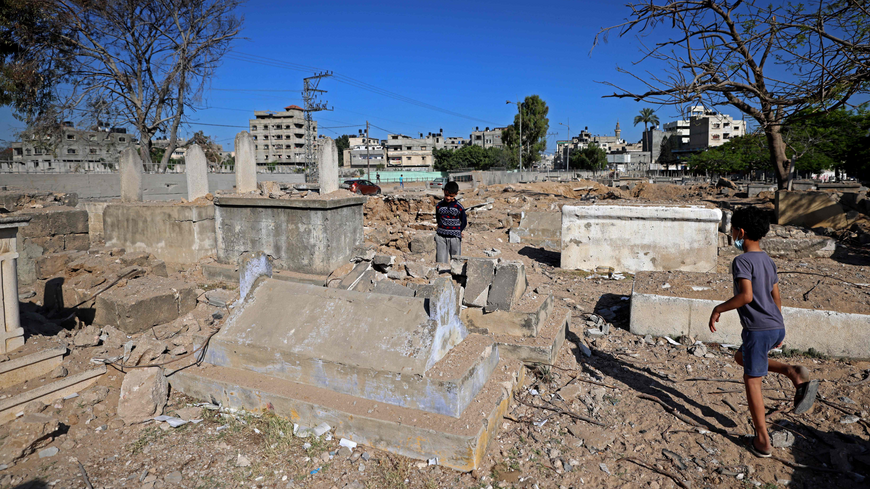 Damage is seen around tombs in the old Shujaiya cemetery in Gaza City after recent Israeli bombings, on May 27, 2021. Some children have turned to begging in Gaza cemeteries. - MOHAMMED ABED/AFP via Getty Images

GAZA CITY, Gaza Strip — A 12-year-old child sits under a tree in al-Faluja cemetery, southwest of Jabalia refugee camp in north Gaza, shading himself from the rays of the burning sun. He waits for grave visitors to arrive, to offer them a few services in exchange for money.

In the afternoon, Hassan (a pseudonym) notices a man passing by. He grabs the plastic water bottles he filled from the tap water in the cemetery and a broom, and follows the visitor to the grave. The boy dusts the tombstone and waters the plants surrounding it, then asks the man for a shekel or two (31 to 61 US cents).

Hassan is one of many children who turned to begging in cemeteries because of the rising poverty rates in the besieged enclave. Food insecurity in the Gaza Strip has reached 70%, while poverty and unemployment rates have reached around 75% in 2019, with 33.8% of the population falling under the extreme poverty line, according to the Ministry of Social Development in Gaza.

Hassan also provides the mud used to fill the gaps during burials, in return for some money from the family of the deceased or the funeral director, Jaber. He says he receives 5 shekels ($1.53) for it.

Hassan tells Al-Monitor he is not afraid of the dead, at all, but rather of the living, some of whom terrorize him when the sun sets while he is still in the cemetery.

Hassan has seven brothers and one sister. Due to his family’s economic situation, he was forced to drop out of sixth grade at school. The boy interrupts his conversation with us to call a girl, around 8 years old, whom he and his friends call “the cemetery owner,” for she is here often. He fails to convince her to speak to Al-Monitor.

Al-Monitor headed to the Sheikh Radwan cemetery in central Gaza City on a Thursday, one of the most important visiting days for families. It is also the day that witnesses the largest congregation of child beggars. Haytham (a pseudonym) describes his family’s situation, saying, “We live from one check to the next,” a sentence used by the poor people of Gaza who depend entirely on social security receivables, issued every three months.

Haytham’s family consists of 10 persons (six males and four females). He tells Al-Monitor, “When I see someone coming to visit the dead, I rush to fill the bottles to water the trees surrounding the grave. Some visitors hand me a shekel, others don’t. I don’t ask them; I leave it to them.”

Haytham spoke of some of the issues he faces at the cemetery. Sometimes, the other children, with whom the visitors ask him to share the money, steal his share. However, this doesn’t dissuade him from returning to the cemetery.

Riham al-Agha, the anti-beggary project officer at the Ministry of Social Development, enumerates the reasons behind child begging in Gaza. She cites exclusion and family disintegration, such as divorce, drug abuse by one of the parents or their imprisonment, or moral deviation within the family.

Ruba al-Bitar, child protection officer at the Ministry of Social Development, tells Al-Monitor that low self-esteem among child beggars and being deprived of their childhood can easily lead to bad behaviors such as stealing and lying, as well as physical and verbal aggression.

Being subjected to different types of physical, verbal, sexual and psychological violence makes children more vulnerable to smoking and drug abuse, she says. They also have issues communicating with their family members and the community, due to traumatic experiences they may have had, including violence they have suffered at the hands of others.

Bitar says psychological issues such as anxiety, stress, nightmares, isolation and introversion, resulting from spending their days in an isolated environment at the cemeteries, are quite normal among children. She added, “Child beggars are prone to delinquency more than others because they are begging in an isolated location, which is mostly frequented by adults who are drug addicts and deviant thieves.”

Economic researcher Hassan al-Radih tells Al-Monitor, “Begging is a social crime of which the government, and all its institutions, are responsible, as well as the family, whose responsibility is to monitor its children and their behaviors.”

Radih warns that begging could have a dangerous impact on the Gaza community, which he says is gradually turning into an aid-dependent community instead of a productive one.

Radih suggests issuing laws or regulations criminalizing child labor and begging, creating a specialized department at the Ministry of Social Development aimed at reducing the number of child beggars and sending them to a rehabilitation facility, providing them with age-appropriate job opportunities, promoting the concepts of labor and production.