Already humiliated for relying on UN food rations, Gaza's extreme poor also find themselves ostracized from other parts of society. 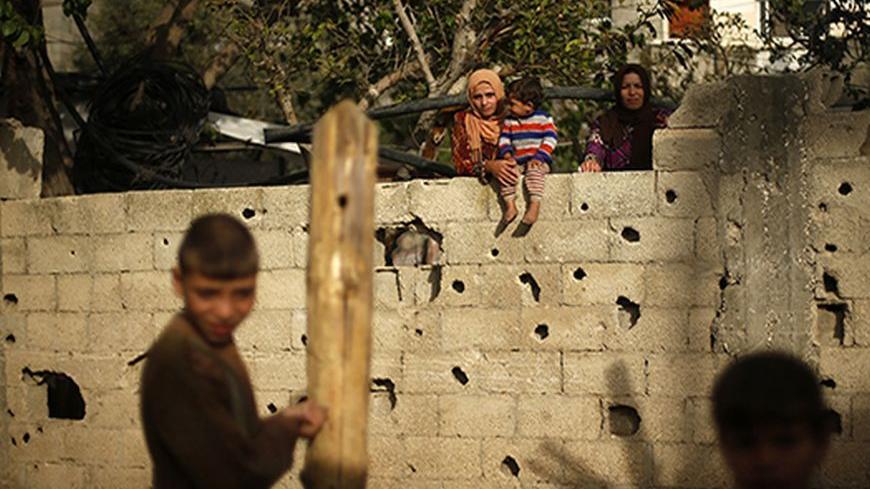 Palestinian women watch their neighbors as they bake bread in a clay oven inside their dwelling in Beit Lahiya, near the border between Israel and northern Gaza Strip, April 7, 2013. - REUTERS/Mohammed Salem

GAZA CITY, Gaza Strip — In the neighborhood of al-Nasr to the west of Gaza, at the doorstep of a modest house with an asbestos roof, two young girls — Nasma, 12, and Abir, 7 — were seated with chunks of bread in their hands, silently watching a group of children play on an old swing.

Even though it was clear that both girls had an eager desire to join the children, they did not approach the swing.

Abir suddenly broke her silence and stood up to head toward the swing. Nasma, however, grabbed her by the hand to keep her from going, saying sternly, “I’ll tell mom.”

The two girls, who looked obviously poor, belong to a family that relies on food aid regularly provided by donors to the  poor in Gaza. “My husband has been unemployed for seven years. We are relying on this aid, as they are our only source of food. Since we are living in a state of extreme poverty, we are shunned by our neighbors, who do not allow their children to play with mine,” their mother told Al-Monitor.

According to a joint UN survey in 2012 conducted by the Palestinian Central Bureau of Statistics (PCBS), the World Food Program (WFP), the United Nations Relief and Works Agency (UNWRA) and the Food and Agriculture Organization, 1.6 million Palestinians — or 34% of Palestinian families — suffered from food insecurity, an increase of 27% since 2011.

According to the data mentioned in a press release issued by the PCBS, a copy of which was published by the Palestinian news agency WAFA, “One-third of Palestinians suffer from food insecurity, half of whom live in the Gaza Strip.”

Nasma and Abir’s family has been through a lot. Each month, they rent a new house. When the last owner threw them out because they were unable to pay rent, they had a hard time finding a new home. Each landlord they tried to rent from refused to take them in; then, a generous individual provided them with modest lodging for free.

Even though the house is located in a relatively upscale neighborhood, it has only one room and a small bathroom. The floor is covered with rugs and sponge mattresses without any basic means of entertainment. Next to the rusty master bed lies a small wooden one for both girls.

The mother clarifies that families looking around for food and relying on food aid are highly stigmatized. “We shy away from people, and we avoid the condescending looks of our neighbors. In addition to the fact that they do not wish to visit us and treat us like the rest of the neighbors, they avoid so much as initiating a conversation with us,” she explained

This stigma prevails over the lives of the children as well. “I sit alone at the end of the classroom, even though every desk is shared by two girls. I do not have friends, because the girls avoid me and do not wish to become friends with me,” relates Nasma, a sixth-grade student.

She notes that she usually hears the girls whisper, talking behind her back about her poor background, and the family’s inability to buy her a new uniform. She refrains from playing with children her age to avoid hearing the insults that are hurled at her.

Her mother interrupted her. “My kids cannot play with other kids in the neighborhood or at school. They hide from the looks of contempt they get, as the clothes they wear now once belonged to some of the neighbors’ children, who gave them away.”

Dr. Walid Mesbah, a specialist in social work, said this stigma — which is attached to the families that rely primarily on in-kind and financial support to acquire food — varies according to their place of residence and the degree of food insecurity there.

“This stigma has a significant impact on families living in upper class residential neighborhoods, where people who receive aid are looked down on. These people are shunned. However, in poor areas such as refugee camps, this stigma is much less prominent, as most of these areas’ residents receive aid and support,” said Mesbah in an interview with Al-Monitor.

“This stigma is placed on poor families, affecting their future and their individual members regardless of their gender or age, whether at university, school or in matters pertaining to marriage. Children are desperate and feel that they have become a burden on society,” he added.

According to a statement on Sept. 25 issued by the official in charge of the distribution process within the WFP, Mahmoud Abu Sido, 20,000 families in Gaza receive food aid regularly, covering the need of 85,000 people affected by poverty. These families receive basic foodstuffs every two months.

Many concerned bodies have been spending large sums to provide food for the people of Gaza, including the World Bank, the EU, UNRWA, the Palestinian Authority (PA) and the Hamas government in Gaza.

In September alone, the financial aid provided by the PA, the EU and the World Bank amounted to $20,349,836.67, according to the Ministry of Social Affairs in the Hamas government.

The increase in numbers of Palestinians who suffer from food insecurity in the Gaza Strip and are dependent on food aid has many reasons, according to Moin Rajab, a professor in economic sciences at Al-Azhar University in Gaza. He attributed it to the ongoing Israeli blockade, the closure of border tunnels to Egypt, the high unemployment rate, poverty and a dearth of job opportunities in Palestinian society.

“Israel brings food for Gazans through the Kerem Shalom crossing, which is the only crossing in the Gaza Strip that is reserved for bringing in goods and food. Nevertheless, the crossing has limited operating hours, and the truckloads of food do not meet the needs of residents, not to mention that it is closed on Jewish holidays or as punitive measures in the event rockets are fired on Israel,” Rajab told Al-Monitor.

Other factors contributing to this situation are the economic recession, the inability to promote the national economy and Gaza’s heavy reliance on imports, along with the PA’s financial problems, according to Rajab.

As for the mother of the two girls, her only hope is that her husband finds work to end the family’s misery. "All I want is for the government — or any agency — to help my husband find work, so that he can provide food and clothing for my children, and protect the family from the social stigma and stares of people and relatives that haunt us everywhere we go."