Gazans are facing harsh living conditions with little money to spend, which is increasingly affecting social relationships in a society where buying gifts for family and friends when visiting their homes is part of the culture. 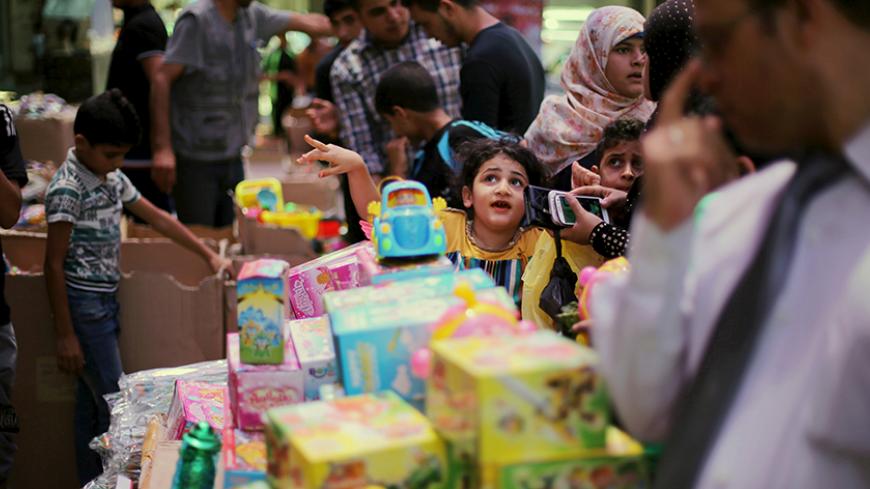 Palestinians shop in a market ahead of the holy month of Ramadan, in Khan Yunis in the southern Gaza Strip, June 17, 2015. - REUTERS/Ibraheem Abu Mustafa

GAZA CITY, Gaza Strip — The Gaza Strip’s financial crises, along with the continuing economic deterioration, cast a shadow on the most basic aspects of Gazans’ social life. Residents are hesitant these days to visit their family, friends and neighbors.

Traditionally, those visiting the homes of others buy a gift for the host. However, due to the harsh living conditions and the lack of purchasing power, Gazans' social lives are starting to be affected, with family ties being severed and people isolating themselves to avoid embarrassment caused by poverty.

The poverty rate in Gaza stood at 65% as of the fourth quarter of 2014, according to the Palestinian Central Bureau of Statistics.

Mouin Rajab, economics professor at Al-Azhar University, believes the economic crisis in the Gaza Strip is directly and negatively impacting social relationships among Gazans. They are focused on securing their basic needs, such as food and housing, and therefore often must neglect maintaining strong social relationships.

“There are about 40,000 employees in Gaza who do not receive their salaries, and 50% of workers are now without a job, in addition to extreme poverty, unemployment and the increasing demand on international food aid. All these indicators make citizens less keen on social relationships,” Rajab told Al-Monitor.

Mohammed Abu Zour, a government employee in Gaza, said that he decided not to visit his brother who had invited him for his young son’s birthday party. He did not want to be embarrassed for not being able to buy a “gift for the host and a birthday present,” which would have at least cost him 20 Israeli shekels ($5). He still has not gotten paid since the consensus government took office in Gaza in June 2014.

“Family ties, visiting [family and friends] and invitations are important aspects that [Islam] nurtures. However, my inability to provide the basic needs for my family of 11 has also made me unable to buy gifts, and thus I refrain from visiting anyone,” Abu Zour told Al-Monitor.

Ferial Najjar, who lives with her husband and children, feels estranged from her family because her brothers have not visited her in over eight months; they only live three streets away.

“I have expressed to my family how deeply annoyed I am because they don’t visit. This has created a kind of estrangement between us, and it is coming off as carelessness [on their part]. But one of my brothers told me that the reason behind [his lack of visits] is his inability to buy anything to offer [us],” she told Al-Monitor.

Najjar said that her older brother used to work in a bakery — a job he lost — and her younger brother graduated from university two years ago, and he is still unemployed. The family has no income to provide for all its members.

The World Bank revealed in May that unemployment in Gaza is the highest in the world, at a rate of 43% at the end of 2014.

“Since Israel imposed its siege on Gaza and launched successive wars against it — in 2008, 2012 and 2014 — the Palestinian economy in Gaza has been suffering from a continuous decline, which has undermined social relationships and made them the least of the citizens’ concerns. Buying gifts has become impossible for most families,” Rajab said.

“The deteriorating living standards are pushing Palestinian citizens to only care about themselves and look after their personal interests. They are now unable to develop social relationships, which ruins the social fabric and turns relatives and neighbors into strangers,” Abu Heen said.

Academics and social media activists are trying to address the situation of isolation and social introversion through an online campaign that aims to put an end to the embarrassment Gazans feel about their inability to buy gifts. The campaign aims to encourage visits without the requirement of having to bring along any gifts. The hashtag used for the campaign, which translates to "you are my gift," states that a person is the biggest and most meaningful gift, as opposed to presents.

Majed Turban, a lecturer in the journalism and information department at Al-Aqsa University, wrote on his Facebook page: “In light of the difficult economic circumstances experienced by the people of Gaza, social relations have been negatively affected. Friendly visits between relatives and acquaintances have ceased to take place due to a lack of financial resources that prevent the visitor from being able to bring along a gift, affecting the majority of our relationships. So give this a little thought, dear brother, son, uncle … you are my gift, and you entering my home is happiness in itself.”

Turban told Al-Monitor that the campaign aims to improve human relationships and serves as a warning about the dangers of severing social ties and halting visits to family, friends and neighbors, in addition to stating that being able to offer a gift when visiting someone is not the most important thing.

Ibtihal Sharrab, an Internet user in support of the campaign, wrote on her Facebook page: “You don’t need to bring me a gift when you visit. Visiting me and checking up on me would be the perfect gift.”

Abu Heen said the fact that relatives and neighbors refrain from visiting each other to avoid any embarrassment “is considered an issue that requires [Gazans] to take a moment to face all the negative social manifestations the economic crisis has brought about. [Gazans] also need to find a solution for all the causes of the deteriorating economic conditions, including the siege, war and the Palestinian internal division.”