Large numbers of Palestinians in Gaza are suffering from psychological problems as a result of the dire economic and security situation, with few resources for treatment. 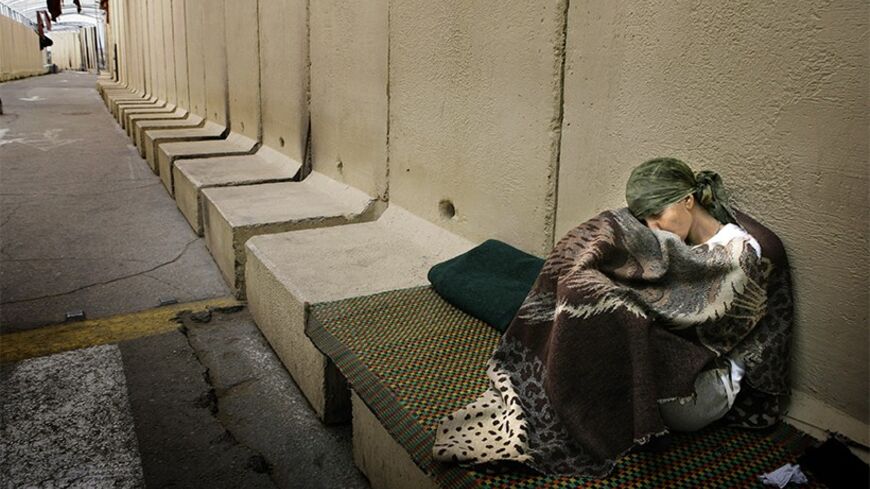 GAZA CITY, Gaza Strip — Abu Ashraf, a 47-year-old Gazan, spends the majority of his time in his small room with no means of entertainment and only leaves to use the restroom. He sits on his bed for long hours, smoking, with no desire to see or talk to anyone.

Al-Monitor went to interview him. His wife tried to convince him to come out of the room and talk, but he refused. “He is more comfortable in his room, let us go to him,” she apologized.

Abu Ashraf, who seemed nervous and unsettled, worked for years as a contractor in a construction company in Israel. After the second intifada, when the Israeli government decided to prevent workers from coming into Israel, he became depressed as he could not find a full-time job in Gaza.

“As you can see, he has been like this for years,” his wife noted. “Even though he tried to find a job in Gaza, since the imposition of the Israeli blockade in 2007, he hasn’t found a stable job because of the decision of the Israeli occupation to prohibit the entry of cement.”

She said that she tried to take him to a clinic for psychological treatment, but he refused, and his psychological problems became chronic.

According to Fadel Abu Hein, the director of the Community Training and Crisis Management Center in Gaza, around 60% of Gazans suffer from psychological illnesses and are in need of treatment. He said that the deterioration of the political and economic situation is a direct cause of the spread of mental illness.

Abu Hein told Al-Monitor that the most common psychological illness in Gaza is anxiety, affecting 35% of his patients, followed by depression, affecting 25% of them. He noted that unemployment and lack of job opportunities are the main reasons behind these illnesses, followed by the internal division and the subsequent laying off of employees, high poverty rates, the blockade and successive Israeli wars on the Gaza Strip.

A report issued April 7 by the health department of the Palestinian Non-Governmental Organization Network explained that the negative economic and social effects of the Israeli blockade are leading “to the exacerbation of psychological problems in Gaza among a large spectrum of citizens, given the increase in poverty rates, unemployment, lack of opportunities and dim hopes for genuine and positive change in terms of their livelihood and humanitarian situations. This is why the levels of anxiety, depression and domestic and societal violence are on the rise.”

According to Dardah Shaer, a professor of psychology at Al-Aqsa University, the majority of patients with mental illnesses refuse treatment out of fear of social stigma.

“Palestinian culture considers whoever visits a psychiatrist as mentally ill, and this is a stigma the patients try to evade so that people would not say they are crazy,” Shaer told Al-Monitor.

This is the case of Nour, 27, whose husband divorced her over her psychological illness that resulted from a trauma she suffered after the Israeli war on Gaza at the end of 2008. She told Al-Monitor, “My brother died in front of my eyes during the war, and I was screaming at the top of my lungs when it was happening. Afterward, I was living in a vortex of anxiety and unending hallucinations until my husband divorced me, because he was not able to deal with my illness.”

Nour said that she completely refused to seek treatment, for fear of being called crazy, a label that would prevent her from ever getting married again. “Society’s view has led me to resort to psychics hoping to find a treatment,” she added. Her condition hasn’t changed, after having spent large amounts of money on "psychics."

According to Abu Hein, it is hard for the patient to accept the idea of seeking treatment, “since acknowledging that one has cancer is a lot easier than admitting they have a psychological illness. Also, society accepts cancer patients, but does not accept patients with mental illness. The latter isolate themselves away from social relations such as marriage and friendship.”

He noted that the negative view of these illnesses leads patients to resort to "psychics" who work in secret, instead of going to psychiatrists who work publicly and within an official framework. This route, however, leads to the deterioration of their psychological state.

Neglect and lack of expertise

Shaer believes that since mental patients avoid treatment, the actual number of people suffering from psychological disorders might be a lot higher than officially recognized. He said, “Despite this, the provided government services are subpar and not in line with the seriousness of the crisis.”

“There are few psychological centers in Gaza and they are managed by teams that lack specialists and capabilities. Under normal circumstances, there should be one psychological center for every 50,000 people. But the situation of treatment for mental illness in Gaza is a far cry from this,” Shaer added.

According to an official report published in 2009 on the Ministry of Health’s website, the population in Gaza stands at 1.8 million, while there are only six psychological clinics with 35 nurses, 32 beds, seven specialists, six social workers and three rehabilitation specialists.

In light of economic and political hardships, social stigma and lack of government programs, mental patients in Gaza are limited to two options: resort to "psychics," or become insane.