Rates of serious mental-health disorders among children and others in Gaza have risen dramatically as years of fighting have taken their toll, observes Asmaa al-Ghoul. 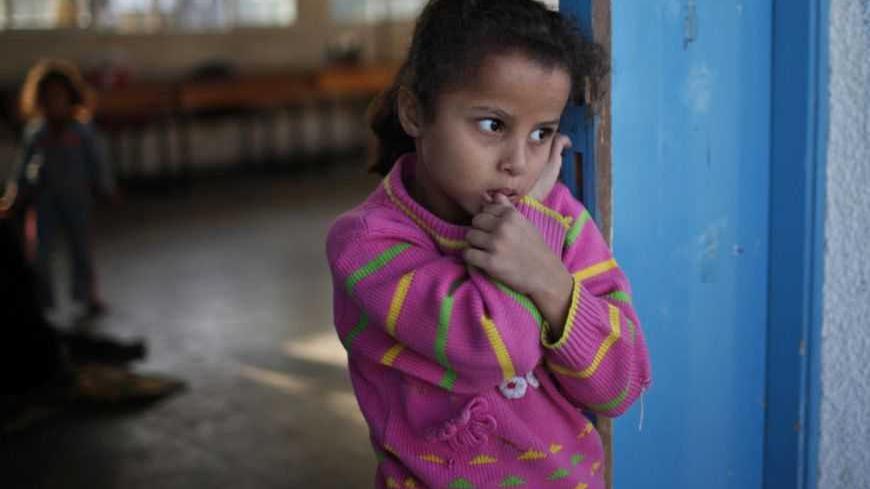 A displaced Palestinian girl stands in the doorway of a United Nations-run school in Gaza City, Nov. 20, 2012, after fleeing her family's home during Israeli air strikes.

Lying on a mattress in the hallway of the women’s ward in the Mental Health Institute in Gaza, 17-year-old Aya looks calm and childishly innocent after the nurses had given her a sleeping pill. She had not been as serene in the morning, however. According to psychiatrist Khitam al-Sheikh Ali, who runs the ward, Aya had bitten one of the nurses in an episode during a nervous breakdown.

The teenager’s mother explained that she had brought her daughter to the hospital after her delusions reached an undeniable point and Aya began to believe that her brothers were plotting to kill her. She said Aya had been living with a psychological disorder for a long time, but that it had worsened in the wake of the war against Gaza in 2008.

Aya’s condition makes her 22-year-old sister sad. Whenever she visits, she places her hand in front of Aya’s nose while she sleeps to make sure she is breathing. The family seems worried as well as embarrassed by the incident with the nurse earlier in the morning.

Sheikh Ali reassures patients that only their first names, not their family names, are recorded in the institute's reports, thus encouraging every patient to tell her story.

Maysa, a 23-year-old speaks in broken Arabic in an attempt to convince her mother, Umm Ahmad, not to leave her at the hospital. She then falls silent and goes to wash her apparently swollen hands. Her mother tells Al-Monitor, “I want to keep her here for a while so that her sister Fatima, who suffers from a psychological disorder that deteriorated after her divorce, can get a chance to rest. The presence of both of them at home means a constant fight. I also have a third daughter in high school, but it is hard for her to study amid Maysa’s shouting and violent behavior.”

The psychiatrist, giving a tour of the facility, said that Maysa suffers from social aggressiveness in addition to a congenital disorder, obsessive-compulsive disorder (OCD) and other psychological problems.

Randa, a shocked-looking 39-year-old sitting in bed, whispers, “My husband is the reason I’m here. He beats me a lot and wants me to feed the kids while he does nothing. I’ve only been here for three days, but I miss my family. I won’t rest, except when I’m in my daughters’ arms. My youngest daughter is six months old and needs breastfeeding.”

Sheikh Ali notes that Randa suffers from postpartum depression. She misses her children, but fears her husband, who hits her. His marriage to another woman exacerbated her psychological state.

Sabha, 43, looks pitifully at Randa and states, “I am neither sick nor crazy. My nephews locked me in a room for a whole year because they want my inheritance, which consists of a piece of land and three houses. Every time I go back home, they lock me up. I prefer to stay here.”

Sheikh Ali told Al-Monitor that there are nine patients in the ward and that most of them arrived there in a hysterical state. They are immediately injected with antidepressants. After calming down, the patients are supposed to return to their families, yet most families do not take their daughters back, and the patients often do not want to go home. They prefer instead to receive the benefits they get from the special care that the nurses provide and group therapy sessions. Sheikh Ali added that many patients do not have adequate financial means, so the ward staff sometimes collects money to give to patients who do not have an allowance.

Postwar: Unable to adapt to the universe

The United Nations Relief and Works Agency (UNRWA) reported a more than 100% increase in psychological disorders in the Gaza Strip in the wake of the Israeli war on Gaza in November 2012. According to the report, issued in late January 2013, the number of people undergoing treatment for psychological illnesses or post-traumatic stress disorder (PTSD) increased from November to December, and 42% of those affected were under the age of nine.

The head of the hospital, Dr. Aysh Soumour, offered a tour of the men’s ward. The first patient was Wissam, 17, who appeared surprised and silent. His older brother said that Wissam had experienced psychological shock due to violence from his father. He added that their father is violent toward the whole family, but Wissam had been affected the most by it.

Another patient, Mouin, 46, was shivering and constantly standing up and sitting down during our conversation with him. He said, “My head is poisoned, and my nerves are wrecked. . . . I am unable to adapt to the universe . . . and to nature. What I am suffering from is not a headache.” Mouin held his head to stop it from shaking, while talking and shivering on the bed. Soumour said that Mouin's episodes began immediately after the November war. When his family brought him to the hospital, he was suffering from hallucinations and schizophrenia.

Soumour told Al-Monitor that the hospital’s patient load increased by 20% after the November war. He said that patients with the most severe cases usually stay at the hospital for a period of two weeks at most. When patients become better, they go back home. Soumour noted that most suffer from severe setbacks, while others are depressed.

Most of the medications needed by the patients are not available at the hospital. Instead, they must buy them from special pharmacies, and they are expensive. The mental health service lack doctors, and the staff needs to be further developed. Soumour wishes that most psychiatrists would return as soon as they obtain degrees.

Soumour added that the situation in Gaza is quite troubling, especially given the mental health statistics. Ideally, there should be one psychiatric institution for every 20,000 residents. In the Gaza Strip, there is one institution for every 350,000 patients. The Mental Health Institute is in constant contact with a number of parties to help obtain support for the hospital, which includes wards for men and women, external consultation clinics and wards for children and addicts. Soumour said that efforts are being made to develop a treatment rehabilitation program.

Three psychiatrists — Houkmi al-Roumi, Habib al-Hawajri and Yaser al-Shaer — work in the children's ward. One patient, Malak, was brought to the hospital by her father because she suffers from attention deficit hyperactivity disorder (ADHD). He had hesitated to come earlier because he feared that people would say his daughter is psychologically ill. The doctors recommended some tests for her.

Roumi, head of the children’s ward, told Al-Monitor that some families view mental illness as a stigma. On the other hand, many families take care of their sick children themselves. He clarified that most children admitted to the hospital suffer from nightmares, depression, anxiety, autism, involuntary urination, developmental disorders and psychological shock. Children directly affected by war suffer in particular from these disorders. Some of them have lost their families, their houses have been invaded or they live in areas of conflict.

Roumi laments the limited capacities for psychiatric, behavioral, rehabilitative and special education treatment. There is a lack of globally known treatment methods for disorders such as autism, which affects 200 children under the center’s care. Moreover, adequate laboratories and diagnostic tools, such as MRIs and PET scans, are lacking. This forces patients to travel to other locations to have testing or to go to costly special clinics.

After the November war, UNICEF released the results of a study of psychological diagnoses for children in Gaza Strip. The study showed a 91% increase in sleep disorders. Moreover, 84% of children in the survey seemed “shocked or in awe,” while 85% suffered from changes in appetite.