Despite signs of growing rates of autism in Iraq, there is little governmental interest in the topic, with no specialized centers for treating autistic children outside the Iraqi Kurdistan Region. 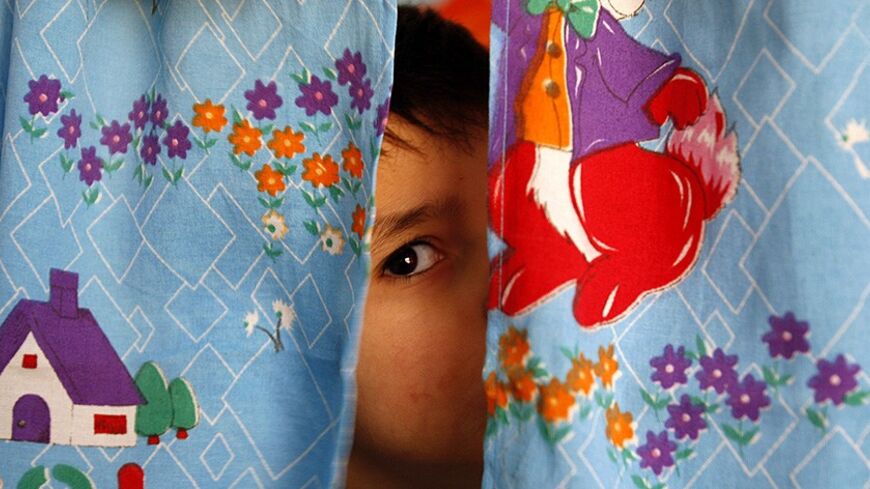 An autistic child peers from between curtains at the Consulting Center in Amman, March 30, 2010. - REUTERS/Ali Jarekji

Doctors in Iraq have limited capabilities when it comes to diagnosing autism or treating it properly, whether using traditional or modern methods, and seem unconcerned about the dangerous repercussions of this disease and its rising rates.

Dr. Khaldoun Hamid al-Hafiz, a pediatrician who specializes in treating neurological disorders, including epilepsy and autism, confirmed this unfortunate reality in a phone call with Al-Monitor. Experienced with diagnosing and treating autism specifically — he worked in several British centers specializing in the treatment of autism — he's trying to support the efforts of the community centers in Baghdad that recently opened their doors to autistic children.

Hafiz indicated that Iraqi pediatricians’ approach to treating autistic children leaves much to be desired. There are no specialized pediatric psychiatric clinics. Instead, the children are treated in clinics for adults. Hafiz said he discovered that many of the children classified as autistic proved to have other psychological disturbances upon examination in his clinic. He also noted that these children had been taking medications for years, dramatically worsening their health. Special diets prescribed in the course of their treatment also negatively affected their mental and physical growth.

Hafiz told Al-Monitor that he felt distressed and might leave Iraq and return to Britain at any moment. He had initially gone to Iraq to conduct studies about autism, after finding out about the rising rates of the condition there and the lack of medical resources to treat it. He had hoped that the country would welcome his ambition to open specialized centers to conduct research about the disorder, its classification, rates and treatment methods, and to stop its spread. However, he was shocked to find that none of the governmental institutions — not the Ministry of Health, the Ministry of Education nor committees in the parliament — were interested in the topic and its dangerous repercussions on society.

In February of this year, Al-Monitor visited the Iraqi Institute for Autism, a community center that was established to treat autistic children, rectify their behavior and teach them as much as possible. Al-Monitor met with an administrative assistant for the institute, Manal Ali, who said that the center does not accept all autistic children, but only cases that can improve. She added that the institute accommodates only 22 cases, its financial capacity.

Ali noted that the majority of the center's clients have been victims of domestic violence. The families of the autistic children did not know how to deal with them, simply seeing the children as mentally challenged. Ali talked with sadness about one of the cases, saying that the child was locked in an empty room and beaten constantly by his mother when he made any noise. When the center took him in, the signs of physical abuse were visible on his body. It became clear that the lack of societal and familial awareness toward autistic children is widespread and is not easily addressed.

As of today, there are no precise statistics on autism in Iraq. Governmental centers specialized in treating autism and schools or institutes specialized in teaching autistic children are nonexistent. Treatment for autistic patients is limited to private centers and institutes that are not supervised by any official bodies, and thus it cannot be confirmed whether the methods used to treat the children are suitable.

Dr. Taha Jazza from the Center for Educational and Psychological Research addressed this issue in one of his articles that touched on autism. He noted that according to a study conducted by a specialist at the center, there are 7,000 known children dealing with autism in Iraq. Yet this number does not capture the magnitude of the situation, because the study was only able to access the number of children registered in the 16 centers for autism scattered throughout the Iraqi provinces, including the Kurdistan Region.

International studies have addressed the issue of autism in Iraq, as well. One of these was prepared in 2011 by the Autism Research Center at Cambridge University. The study showed that post-2003, autism was recorded at higher levels than in the years before. According to the study, autism affected 75 out of every 1,000 children 5 to 10 years old.

In 2012, an article published on the website of Gilford University counted 5,000 Iraqi children fighting autism, and said that there might be more cases that were not diagnosed due to lack of capabilities and specialized centers.

Jazza mentioned in his article that the government of the Iraqi Kurdistan Region, unlike the federal government in Baghdad, has dealt seriously with the issue of autism by opening specialized governmental centers to treat autistic children and institutes to teach them. It also amended the laws to allocate a fixed amount of the governmental budget for autistic children. Additionally, it granted employed parents who left their jobs to look after their autistic child a monthly salary and other allocations. The federal government in Baghdad is studying the possibility of doing the same.