Though new and experimental treatments are slow to be adopted in Egypt, some medical professionals see great potential in music therapy. 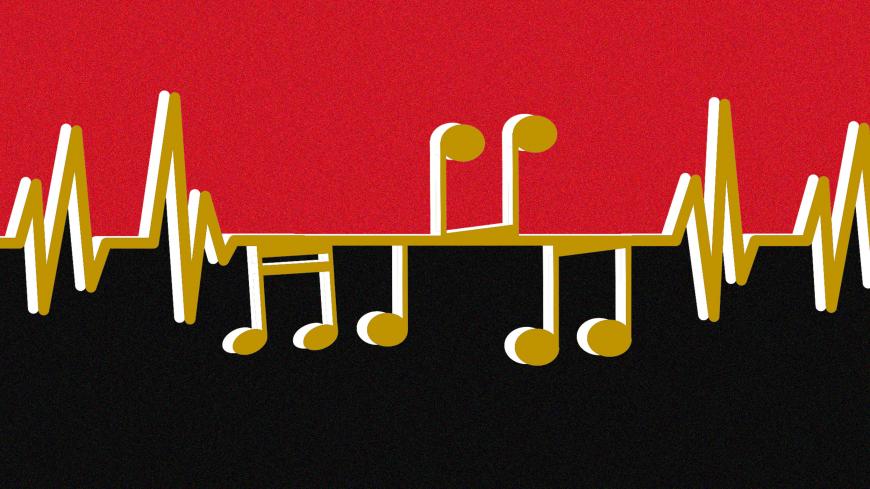 CAIRO — Have you ever thought about how music can be used in psychotherapy or to regulate blood pressure? For Egyptians, the answer is probably no.

On Oct. 8, the Ministry of Health announced that it would hold a survey on non-infectious chronic diseases such as high blood pressure in a number of provinces so that needs for medicine and treatment can be reassessed.

A source from the Ministry of Health told Al-Monitor on condition of anonymity that music therapy is unlikely to be part of this study. “Despite our belief that the percentage of people with high blood pressure in Egypt is one of the highest [in the Middle East] due to heavy psychological, physical and social pressures, I do not think music therapy sessions could be part of the government's plans of treatment,” the source said.

However, belief in the healing powers of music has begun to spread among some artists and doctors in Egypt. The Egyptian Feminist Union, together with a number of jazz musicians from Panama, organized a workshop to train more than 100 Egyptian women from Cairo, Alexandria and Minya to treat themselves and others who suffer from severe anxiety, phobias and high blood pressure, through relaxation exercises and music. The workshop was held on the sidelines of a visit by the Panamanian Danilo Perez Foundation to Cairo to participate in the Cairo International Jazz Festival from Sept. 28 to Oct. 1.

Marwa Hassan, a musician from Cairo who participated in the workshop, told Al-Monitor, “The workshop was not limited to musical exercises, but included an introduction to the history of the use of music in psychological treatments. It all started with Arabs in Andalusia who turned to music to calm patients with epilepsy, phobias and depression. They, of course, treated all of them as mental illnesses.”

Hassan added, “The theories of music therapy have developed in Europe. Various scientific investigations have proven music’s usefulness in treating stress and other issues. Music therapy is used to relieve stress and tension, which are some of the main causes of high blood pressure. It is also used to prevent anxiety and alleviate panic, including for autistic people."

She said, however, that she did not think this technique will find a warm reception in Egypt. "There is no comprehensive scientific research on the topic in Egypt. Also, even many traditional and standard methods of treatment are unavailable in major Egyptian hospitals, so how can we expect to find an unconventional method like music therapy?”

Shaima Mahmoud, another workshop participant from Minya, seemed more optimistic. “Using music therapy has indeed occurred to many Egyptian psychiatrists and doctors specializing in treating autism,” she told Al-Monitor. “The scenes we see in movies where psychiatrists tell patients to lie on the couch and listen to music are not fiction. Many therapists, including Egyptian ones, use this technique.”

Youm7 reported in July that a private Egyptian hospital has been treating patients with music to ease their anxiety and lift their morale. The article withheld the name of the hospital so as not to be considered an advertisement.

In a June press statement, Sherif Abul-Naja, the director of a charity hospital for pediatric cancer called 57357, revealed that the hospital had established a new department to help children overcome the psychological effects of cancer through music.

An Egyptian psychiatrist who specializes in music therapy, Dr. Khaled Salam, told Al-Monitor, “When we are exposed to music, it is not simply our auditory system which is stimulated but also our brain, which subconsciously interacts with the music and stimulates the release of enzymes that can either relax the patient more make him tenser.”

Another psychiatrist, Dr. Mustafa al-Nahhas, told Al-Monitor, “Music, singing and art in general is a form of psychotherapy that we encounter daily without really knowing it. [Art] helps reduce anxiety, bring joy and get rid of dark thoughts, even if for a short period of time. This is what we try to accomplish in psychotherapy.”

Nahhas added, “If we want to use music as a standard therapy, we need to conduct research as well as change how Egyptians perceive psychotherapy in general.”

He said, “Many Egyptians hate to visit psychiatrists because they fear their community would judge them and assume that they are insane. I hope the media will take it upon itself to correct this view and differentiate between patients who receive therapy because they have psychological issues to work through and those who suffer from serious mental illnesses. This is particularly important because the majority of Egypt's high blood pressure cases, whose numbers have skyrocketed, result from patients being under a lot of psychological and social pressure.”

Nahhas concluded, “We cannot develop new methods of psychotherapy in Egypt such as music therapy if the patients do not believe in the need for psychological treatment in the first place.”

Despite the lack of scientific research, the decline in medical services and the lack of faith of many Egyptians in psychotherapy, music therapy has made some inroads in Egyptian medicine, and its adherents hope it will quickly make its way onto the list of adopted treatment methods.