The Turkish government has paved the way for hospitals to use treatments dating back to Seljuk and Ottoman times, including bloodsucking leeches and scar-healing flies. 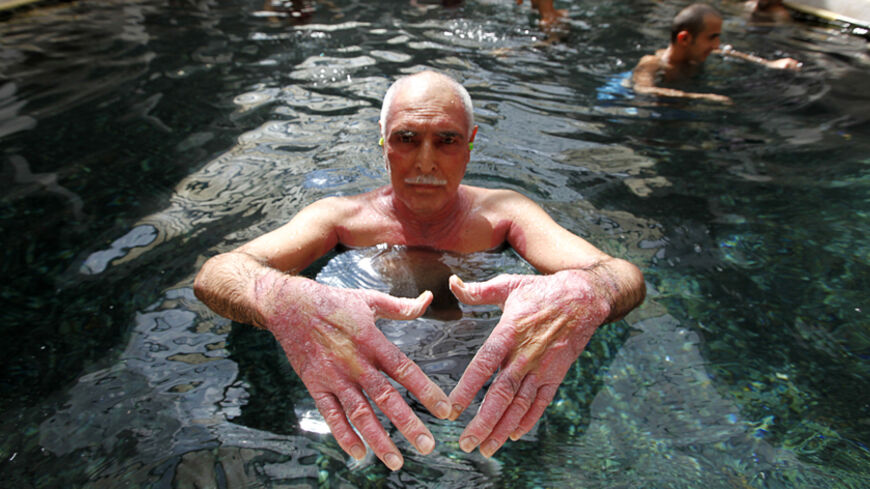 A psoriasis patient displays his hands as he relaxes in a hot spa pool as part of his treatment in Kangal, 105 kilometers (65 miles) south of the central Anatolian city of Sivas, Aug. 8, 2009. - REUTERS/Umit Bektas

“Don’t be late, special herbal solutions are here for you … We have leeches sucking polluted blood, flies healing scars, music and hypnotic methods curing mental patients.” This is not a joke. The Turkish government’s health care transformation program continues to come up with brand-new services.

As in almost every realm in Turkey, major changes are underway also in the health care sector. The idea that "alternative medicine is nothing but witchcraft and charlatanism” is now a thing of the past. In the coming days, Turkish hospitals and other health care facilities will seek to attract patients with marketing materials that would be no different from the one above.

The government has paved the way for the use of traditional medicine in Turkish hospitals, overriding objections by professional organizations such as the Turkish Medical Association (TTB), which rejects alternatives to medicine and treatments that are not scientifically proven.

The Health Ministry’s regulation on “traditional and complementary medicine” took effect Oct. 27. Accordingly, 14 alternative treatments can now be legally practiced: acupuncture (the stimulation of specific points along the skin with thin needles), apitherapy (the use of honeybee products for treatment), phytotherapy (treatments based on traditional herbalism), hypnosis, leeches, homeopathy, chiropractic (massage-like treatment on the muscles, the spine and the skeleton affecting the nervous system), wet cupping, larval therapy (the introduction of live, disinfected maggots into the skin), mesotherapy (the injection of special medications into the skin), prolotherapy (the injection of irritating solutions into an injured spot to provoke regenerative tissue response), osteopathy (nonsurgical treatments of the muscle and skeleton system), ozone therapy (the introduction of ozone and oxygen gas mixtures into the body) and reflexology (massage-like treatment of pressure on reflex areas).

Only certified physicians and dentists can practice these treatments. Yet, it remains unclear how they will be able to learn and master such a wide range of treatments in a single certification program.

In remarks to an online medical journal on Nov. 12, TTB Secretary-General Ozden Sener voiced serious concerns. “We hear that courses will be launched in some [medical] faculties to teach some of those methods. We have to remind [the government] here that all educational activities in medical faculties must have a scientific basis. The curricula must be shaped on the basis of scientific foundations and not according to market conditions. We are against those practices, which the ministry is introducing for the market to benefit. The TTB will go to court [against the regulation] as part of efforts we are expending together with other professional associations,” Sener said.

The Social Security Institution will not cover the cost of alternative treatments. Patients who would like to receive ozone therapy or acupuncture, for instance, will have to pay out of pocket.

Yasar Sevuk, a lawyer who has long worked in the public sector, said the state is under the obligation to “ensure that everybody leads a healthy life physically and mentally” as a constitutional duty.

“The criticism stems from questions of how those special treatments will be controlled and supervised and who will apply them. Moreover, if the door has been opened to ancient medicinal methods, then they should be covered by social security. If they believe those methods are beneficial, then everybody should have an equal access. That’s what the state’s principle of ‘social justice’ requires,” Sevuk told Al-Monitor.

“The regulation, however, creates inequalities. Only those with deep pockets can benefit from [those treatments in] hospitals. The ministry wants to regulate those ancient treatments, but poor citizens are again left in the hands of incompetent people who have little knowledge of alternative medicine,” he added.

A provision in the regulation, which says that “treatment units can be opened in touristic facilities under the supervision of the Culture and Tourism Ministry,” speaks of another objective the government appears to have. Treatments such as leech treatment, ozone therapy and mesotherapy are widespread especially in regions that attract tourists. Ebru Basa, secretary-general of the Ankara Medical Chamber, believes the real aim of the regulation is to lay the ground for health tourism.

The use of traditional and complementary treatments has been on the rise globally. In the United States, for instance, the National Center for Complementary and Alternative Medicine (NCCAM) has been created, and in 2010 the National Institute of Health allocated $520 million for research in this realm. The NCCAM has classified the dozens of traditional and complementary treatments in three main categories: treatments based on natural products, mind and body practices and physical manipulations.

In Austria and Germany, almost all traditional and complementary medicinal treatments are performed by licensed doctors. In Australia, India, Malaysia and countries in the Far East efforts are underway to draw up new policies to regulate the use of traditional and alternative medicine.

The Health Ministry’s October regulation is the first comprehensive regulation on traditional and complementary medicine in Turkey.

True to the government’s style in many other areas, Mehmet Zafer Kalayci, head of the Health Ministry’s Alternative Medicine Department, said they had been inspired by the Seljuks and the Ottomans. “Music therapy was a treatment practiced in the Seljuk and Ottoman eras. People with mental disorders were treated using this method. Indications include also psychological problems. Research exists about which modes of Turkish classical music have a healing effect on which disorders. Symphonic water sounds are used in this music,” Kalayci was quoted as saying by Gunes daily. “Music therapy was used in an institution named after Gevher Nesibe, who taught medicine in Anatolian lands. Similarly, this method was used in a treatment center in Edirne in Thrace.”

Kalayci also said that up to 4,000 medicinal plants existed in Turkey, adding that the number could be raised to 12,000 through appropriate agricultural methods, and that the plants could be used in treatments that fall within the scope of the ministry's regulation.

Having made little contribution to positive medical science literature, Turkey appears poised to quickly embrace alternative medicine as many Turks are strongly inclined to treatments based on hearsay and ancestral methods. And now with state sponsorship, this trend is likely to spread fast and mark a new era in patient treatment in Turkey.