Although Palestinian prisoners are given much attention and press when released, they face many challenges alone when it comes to re-entering everyday life. 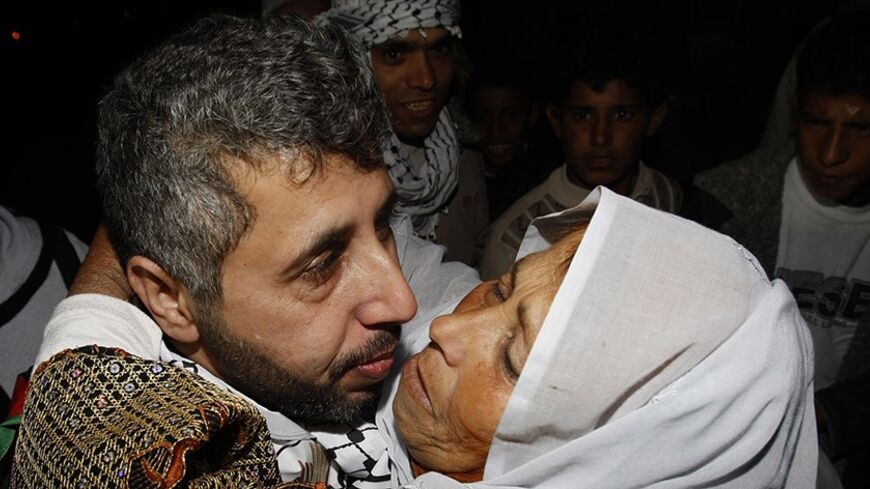 Liberated prisoner Oweida Kalab, 50, closed all the windows and turned on the radio to listen to Hebrew-language stations. He locked himself inside his room and refused to see visitors or go outside, except for the rarest of occasions, as he relived his 25 years in prison. For 18 of these years he was in solitary confinement, unable to hear anything but the voices of his Israeli jailers.

His brother’s wife, Ferial Kalab, who takes care of him with her family, told Al-Monitor, “The [Israeli] occupation forces arrested him in 1988. We used to go visit him when he was still a young man. But in 1992 he began refusing to come out and meet with us, so we stopped going to see him. We got word from other prisoners that his mental state was deteriorating.” She explained that his comrades attributed this deterioration to the solitary confinement and interrogation methods used inside the prison.

Oweida is not the only detainee who has continued suffering after his release pursuant to the Shalit deal. Liberated prisoner Mohammad Karim, 31, who was incarcerated for nine years and released in the same deal, expressed his frustration to Al-Monitor. He said, “I feel that everyone is better than me. They all can plan for their futures, but I cannot. Despite my smile, this freedom pains me. I would rather remain alone and away from people.”

The same holds true for liberated prisoner Hanaa Shalabi, who famously went on hunger strike while in Israeli custody and was released on condition that she be deported to the Gaza Strip. She told Al-Monitor that anxiety and stress caused her to lose her unborn child. She said, “I lost my baby when I was seven months pregnant. The doctor told me that my constant nervousness and stressed condition were to blame.”

Shalabi affirmed that all the prisoners needed psychological rehabilitation. She added, “No private nor official entity gave this matter any attention, and we were never asked to attend emotional treatment sessions.”

Ferial, another relative of Kalab, agreed: “All the relevant parties knew how bad Oweida’s psychological condition was. Yet, no one helped him.”

Around 1,000 Palestinian prisoners were released as part of the 2011 Shalit deal. Exchange deals reached with occupation forces since 1948 number approximately 38, not including the one brokered by President Mahmoud Abbas in December through US Secretary of State John Kerry.

Concerning psychological care, the undersecretary of the Ministry of Prisoners in the Gaza government, Bahauddin al-Madhoun, told Al-Monitor that the ministry coordinated with a mental health hospital and offered free medical insurance to all prisoners.

The head of the Committee of Deported Prisoners from the West Bank and Jerusalem, liberated prisoner Abdul Rahman Ghneimat, said in an interview at the committee’s headquarters that the body is present during all events held by released and deported prisoners to compensate for the absence of family members and to relieve their loneliness. He explained, “There are no prisoners suffering from mental states requiring psychological treatment. As a result, we never thought much about providing such programs.”

Bassam al-Majdalawi, head of the Gaza office of the Ramallah government’s Ministry of Prisoners, told Al-Monitor that the ministry and its services had once had a presence, before Hamas took over the Gaza Strip. He said, “There was a psychological rehabilitation program in partnership with the Gaza Mental Health Program. That program no longer is available.”

Psychologist Dr. Fadel Abu Hein believes that all prisoners are in need of psychiatric treatment and rehabilitation because in prison, they grew accustomed to a certain institutional lifestyle — behaviorally, psychologically and mentally. The life that they return to is very different.

He cautioned that when a small number of liberated prisoners came to see him at his clinic, “I noticed that they suffered from acute depression when faced with a reality that thwarted their great hopes. They also suffered from anxiety, stress and an inability to integrate into their new lives, particularly considering that most of them come out and get married. In truth, I tell you that I heard some of them wish that they had remained in prison.”

In an interview with Al-Monitor at his office, Abu Hein stressed that the first thing that should be done after a prisoner is released is to refer him to a specialist for treatment. He added, “Prisoners feel ashamed and are reluctant to disclose details about their ordeal, despite the fact that their emotional trauma is all part of their resistance efforts.”

After the joy of freedom ebbs and the raucous receptions by families and political parties are over, liberated prisoners are shocked by the discrimination they are subjected to, depending on their affiliations.

Shalabi said, “The reality faced by prisoners after their release is catastrophic and sad. For the Palestinian National Authority provides care for prisoners from Fatah, while the Gaza Ministry of Prisoners takes care of prisoners from Hamas and the Committee of Deported Prisoners those from the West Bank. As a result, someone like me, who is a member of the Islamic Jihad, finds herself deprived of many benefits such as jobs and educational grants.”

Shalabi added that as soon as she was released and arrived in the Gaza Strip, thousands gathered to take photos with her and interview her. But everyone disappeared once she started re-establishing her life and got married. She said, “When I sought my lost rights among the different political factions, every one of them told me to go to Islamic Jihad, for I was one of its members. It would have been much better if all prisoners were considered the offspring of the country instead.”

A. B., who spent more than 20 years in Israeli jails before being released as part of the Shalit deal, told Al-Monitor, “Upon my liberation, I received many promises from the Gaza government, the president and the factions. Accordingly, I made plans for a business project and a house once I got married. But I now find myself in debt to the tune of $35,000.”

In contrast, the Ramallah government Prisoners Office in Gaza and the Gaza government’s Ministry of Prisoners both said that they do not differentiate between prisoners and offer every one of them services and salaries.

Madhoun added that pursuant to Palestinian law, every prisoner who spent more than five years in custody receives a job, a salary and a grant from the president, in addition to access to training programs and grants for small projects under the supervision of the Association of Liberated Captives. He explained that the program is currently reduced due to the blockade imposed on the Gaza government.

Mohamed al-Dirawi, who was himself imprisoned for 11 years, is the director of the Association of Liberated Prisoners. He said that a growing number of prisoners face large debts, resulting in psychological stress.

He added, “Prisoners are only respected when they are interviewed in the press. All promises, including providing them with apartments, dissipated when the United Arab Emirates refused to complete the residential city project. As a result, prisoners have to carry the burden of paying rent for the rest of their lives in addition to other expenses, such as those associated with childbearing.”