Secondhand clothing sellers in Gaza see a steady increase in demand despite the social stigma. 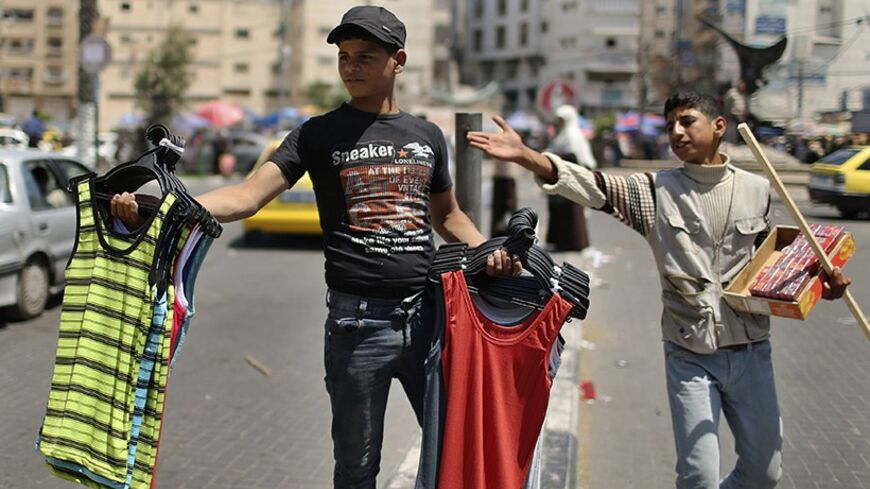 Palestinian boys sell cigarettes and clothes on a street in Gaza City, May 1, 2014. - REUTERS/Mohammed Salem

GAZA CITY, Gaza Strip — Merchant Mohammed al-Masri’s voice boomed through the loudspeaker as he mans his used clothing stand at the popular Firas market in the center of Gaza City. “Prices on fire, pick and choose. Any piece for 15 shekels [$4.30],” he tells dozens of customers as they rifle through the piles of clothing.

With sweat pouring down his forehead, Masri told Al-Monitor, “These used clothes attract the poor who are unable to afford new articles. They spend a few minutes choosing whatever is adequate for their needs, all for a few shekels.”

Demand is increasing in the secondhand-clothing market as poverty and unemployment continue to rise due to the the Israeli siege imposed on Gaza for the past seven years continues, according to Mouin Rajab, an economics professor at Gaza’s Al-Azhar University. “Poor Gazan families lack the income needed to buy new clothes. That is why they resort to clothing donated by families who no longer need older items, or buy secondhand clothes sold in popular markets,” he told Al-Monitor.

Close to Masri stood another merchant, Fayez al-Hassan, who pointed at his wares of denim pants, which he advertised with the catchphrase “No to high costs. 80 shekels [$23.16] → only 20 shekels [$5.79]” to attract a lot of customers.

“I have been working at this market for years, and have noticed that demand for used clothing is constantly increasing, with customers finding items here that suit their nearly empty wallets,” he told Al-Monitor.

As he spoke, a woman interrupted him and asked about a pair of men’s trousers. “Sell me these pants for 15 shekels [$4.30], or I’ll walk away.” He reluctantly agreed and smiled sardonically, saying, “As you can see, customers here cannot even afford already inexpensive pants!”

Um Hazem, the woman who successfully haggled on the price, told Al-Monitor that she didn’t care where the clothes came from, saying, “I am only interested in saving a few shekels when buying clothing.”

She explained that the harsh economic situation forced her to buy secondhand clothes, adding, “I am the mother of four boys and five girls, two of whom graduated from college but remain unemployed. As a result, I am compelled to buy them used clothes for lack of money.”

Al-Monitor reported last year on the popularity of international labels among Palestinians in Gaza, including secondhand ones. Used clothes usually reach Gazan merchants through the Israeli-controlled Kerem Shalom crossing. Palestinian merchants purchase the clothes by weight from Israeli companies for only six shekels ($1.74) per kilogram [2.2 pounds], according to merchant Farouk Zkout.

Speaking to Al-Monitor, Zkout noted that the Palestinian Authority imposed customs and excise taxes on these goods at a rate of 20% of their value, while the cost of transporting one truckload amounted to approximately 500 shekels ($145).

Some fortunate customers are lucky enough to find desirable brands in their search among the piles of used clothing, but such things are hard to distinguish for most of these consumers. Zkout pointed to a woman exiting his store after buying some clothes. “This woman just bought a Carter’s brand shirt for her child at a cost of only seven shekels [$2]. I assure you that she does not even realize that fact.”

Rajab noted that these Israeli goods, used but still good to wear, are imported by Palestinian merchants for sale at reduced prices that poor families can afford, once they are mended, washed and ironed. Customers come for various reasons to this popular market, but all these reasons revolve around poverty, unemployment and the lack of income needed to buy new clothes.

Um Fadi Abu Basal comes to this market at the beginning of every summer and winter season to buy apparel for her five children. She told Al-Monitor as she searched among the secondhand clothing, “This is where I find what I need to clothe my children. Unlike new clothes that I cannot afford, these goods are cheap.”

Um Fadi, who lives with her family off aid provided by the United Nations Relief and Works Agency for Palestine Refugees (UNRWA), explained that wearing secondhand clothes was “very embarrassing for my children. That is why I wash and iron them very carefully so that they appear new. I am forced to lie to them and tell them that I bought them new, in order to avoid their feeling insulted or humiliated.”

Sociologist Ahmad Hamad told Al-Monitor that poor families are often stigmatized when they resort to buying secondhand clothing. He said, “People who buy new clothes look down upon those buying used ones. Such behavior has negative ramifications and widens the social gap between the classes.”

Raida, 22, agreed with Hamad. She is getting ready for her wedding in a few weeks, and came to the market from Khan Younis in the southern Gaza Strip with her mother to buy clothing and other essentials for the wedding ceremony.

“We have a flea market in Khan Younis where I live, but I cannot go there or buy from it for fear that my fiancé or one of his relatives will see me there. It would be an unbearable badge of shame for me to be seen spending the dowry that he paid on secondhand clothes,” the young woman, who did not want to disclose her full name, told Al-Monitor.

As for Raida and others in her situation, they are forced to endure the social stigma of buying secondhand clothes as the economic situation in Gaza continues to deteriorate.