No rest in Gaza, even for the dead

Residents in the Gaza Strip are struggling to find graves to bury their dead. 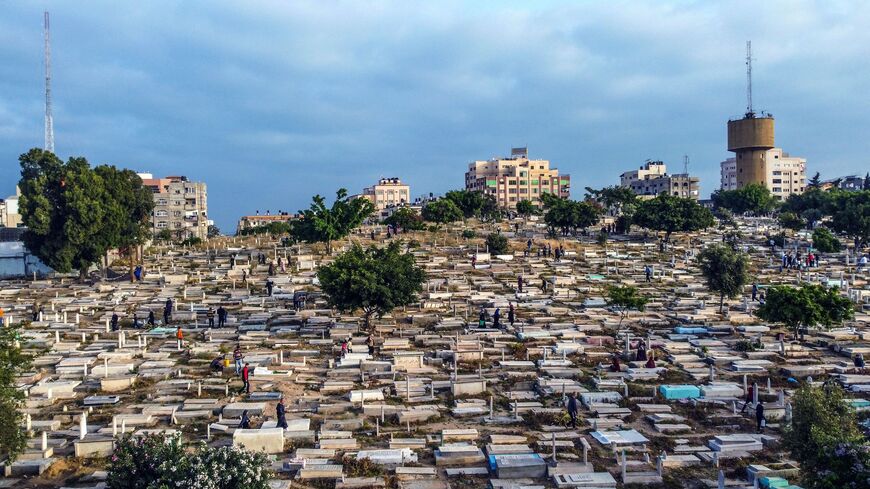 Palestinians visit the graves of relatives at a cemetery in the northern Gaza Strip on May 2, 2022. - MOHAMMED ABED/AFP via Getty Images

The repeated Israeli attacks on the Gaza Strip over the past years have destroyed thousands of housing units and killed thousands of Gazans. The densely populated coastal enclave has become in dire need of new areas to rebuild homes and cemeteries, but the authorities are struggling to accommodate both the living and the dead.

The Gaza Strip, a small area of 365 square kilometers (227 square miles), is home to over 2 million people suffering under deteriorating economic conditions, poor infrastructure and crowding, with no hope of the political situation improving.

Ahmed al-Yazji, who lives in the central Gaza Strip, told Al-Monitor, “My father died in the war on Gaza in May 2021. All our family members had been buried in the Sheikh Radwan cemetery in central Gaza City, but by 2021 it was full, so we could not bury my father there. We were asked to find another place to bury him near the border, very far from where we live. But how are we supposed to visit our father's grave? Ultimately, we were forced to bury him in al-Faluja cemetery in the northern Gaza Strip.”

Yazji added, “There is a lot of empty government land in the Gaza Strip that the government ought to turn into cemeteries. Burying our dead is sacred to us as Muslims, so the government needs to provide cemeteries that are suitable for our dead and they need to be close so families can easily visit their dead and pay their respects. The government is giving land in central Gaza to its employees instead.”

On Oct. 5, an Al-Jazeera report on the pressure on cemeteries in the besieged Gaza Strip, where even the dead cannot rest in peace.

In February, the Ministry of Endowments and Religious Affairs in Gaza closed 24 cemeteries that had reached capacity, noting that it is facing a dilemma in finding land for graves due to overpopulation.

Mazen al-Najjar, director of properties at the Gaza Ministry of Endowments, told Al-Monitor, “We are facing a major problem in providing land for new cemeteries within the Gaza Strip amid the repeated wars, population growth and urban sprawl.”

He added, “We have 64 cemeteries in Gaza, including family and public cemeteries and we have closed 24 of them after reaching capacity. We have plans to build others to make up for the ones that were closed, but to find land and complete the project we need around four years and a huge budget. The Ministry of Endowments cannot do this alone. Other bodies including the Ministry of Local Government, municipalities and the Palestine Land Authority are all responsible for finding land and providing budgets.”

Najjar went on, “The repeated wars have increased demand for new housing and re-housing the homeless, so building cemeteries is no longer a priority. However, the government has to provide accommodation for the dead as well as the living. It must make a development plan to allocate land for cemeteries and provide security staff. Today, there are only 30 guards guarding 64 cemeteries, which has led to many violations and abuses by grave robbers.”