The reconstruction of a mosque at a cost of $1 million in the cash-strapped Gaza Strip has shocked Gaza's largely impoverished population. 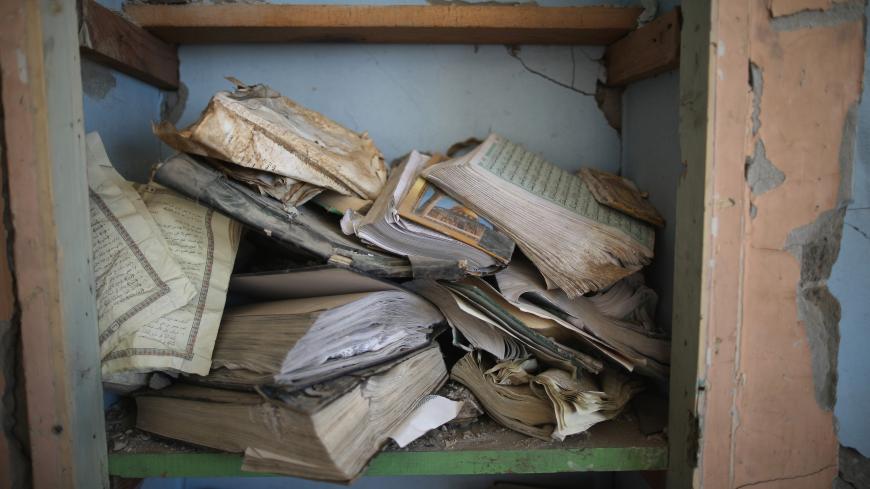 Holy books sit in the rubble of a destroyed mosque among the bombed buildings that scar the landscape of Gaza on June 13, 2015, in Gaza City. - Christopher Furlong/Getty Images

GAZA CITY, Gaza Strip — The announced replacement of a mosque in the west of Gaza City at a cost of more than $1 million has sparked widespread controversy among Palestinians in the coastal enclave, where 85% of the population suffer from poverty.

The Al-Ahram al-Zahabia Construction Company announced on Facebook Feb. 5 that it had won a bid to replace the Khalil al-Wazir Mosque at a total cost of $1.093 million. The post was later edited and the amount removed.

The mosque, modestly constructed like most in the coastal enclave, was destroyed during the 2014 Israeli war on Gaza.

In 2018, Hamas’ Ministry of Endowments and Religious Affairs signed an agreement with the Malaysian Aman Palestin Foundation to fund the mosque replacement, on the condition that it be done in a Malaysian architectural style.

The Aman Palestin Foundation is a Malaysian charity founded in 2004 to collect donations to help Palestinians in the West Bank, Gaza Strip, Lebanon and Syria.

Building luxurious mosques in the Gaza Strip has become a trend since Hamas took over in 2007. Al-Khalidi Mosque was built by a businessman with ties to Hamas, Abdel Aziz al-Khalidi, on the Gaza shore in 2013 at a cost of a half-million dollars.

Mohammed Abu Jiyab, editor of the Al-Eqtesadia newspaper in Gaza, told Al-Monitor, “Building luxurious mosques in the Gaza Strip is inappropriate given the residents' economic situation.” Abu Jiyab stressed the need to use available money to fight poverty and unemployment with projects like building factories.

He added that 46.5% of Palestinians are unemployed and 80% of the population depends on food aid.

Abu Jiyab added that in 2020, international funding for the Gaza Strip declined by 60% and aid from regional Arab countries fell more than 80%.

“Building a mosque at such a high cost is shocking as there are some 2,700 Palestinian families in Gaza who are still displaced since their homes were destroyed in the 2014 war. These families live in rented houses that the UNRWA is paying for,” Abu Jiyab said.

Meanwhile, Abdel Hadi al-Aghad, the undersecretary of the Ministry of Endowments in Gaza, defended the project.

He explained that the design includes a second floor that will house a medical dispensary operated by the Ministry of Health to serve the people of the area. He added that there will be an elevator to accommodate the sick and elderly.

Agha said that Israel destroyed 110 mosques in the Gaza Strip during the 2014 war. The ministry has rebuilt 94 mosques with funding from international charities and continues to look for funders to rebuild the remaining 16.

Agha pointed out that the Ministry of Endowments does more than rebuild mosques, saying, “During the year 2020, the ministry, through donations from inside and outside the Gaza Strip, provided about $10.5 million in food and cash assistance to about 490,000 Palestinian families.”