Aid poured into fixing mosques while Gazans live in tents

Enormous funds are being funneled into the reconstruction of destroyed mosques in private projects that are directed by the donors themselves, with money Hamas cannot redirect toward housing displaced Gazans. 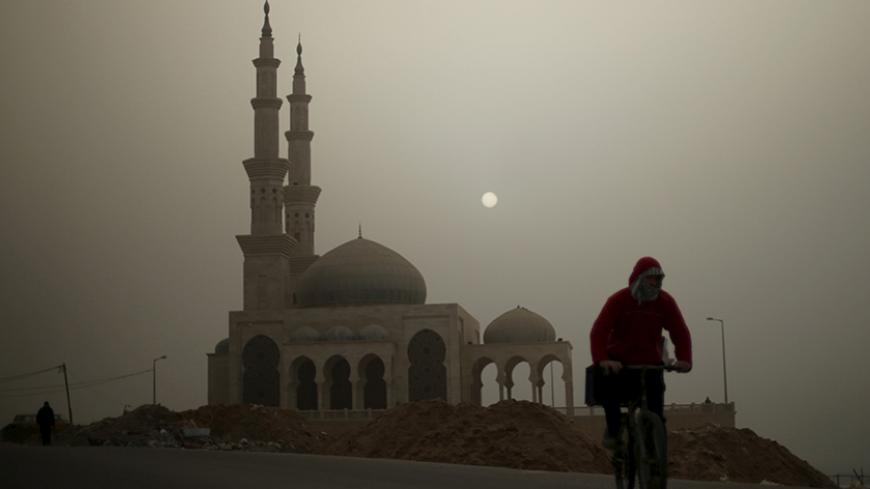 A Palestinian man rides his bicycle in front of a mosque on a stormy day in Gaza, Jan. 18, 2016. - REUTERS/Mohammed Salem

GAZA CITY, Gaza Strip — Every time Israel wages war on Gaza, it targets mosques under the justification that the Palestinian resistance uses their basements to store weapons. The Ministry of Religious Endowments in the Gaza Strip is raising funds for the reconstruction of destroyed mosques, which will cost millions of dollars.

Many Gazans denounce the collection of these enormous sums to rebuild grandiose mosques in a city whose residents are burdened by poverty, unemployment and destruction. The population in Gaza is almost 2 million, 40% of which live below the poverty line and 43% suffer from unemployment, according to the Euro-Med Monitor.

Anwar Abu Shawish, the head of the Directorate of Follow-up at the Ministry of Religious Endowments, told Al-Monitor, “According to the Ministry of Religious Endowments’ statistics, there are 1,078 mosques in the Gaza Strip, 921 of which are supervised by the ministry, while 157 mosques are affiliated with political organizations or Dar al-Sunnah. These organizations merely obtain permits to build their mosques from the municipality without reference to the Ministry of Religious Endowments, and thus the latter has no power over them. The ministry has not finished rebuilding destroyed mosques due to the blockade, the lack of funds and the political differences. Fifty-four mosques are still completely destroyed, in addition to hundreds of partially destroyed mosques whose reconstruction is yet to start.”

He explained that the ministry collects donations from other countries and concerned institutions for rebuilding destroyed mosques and supervises the reconstruction process through committees composed of residents from the neighborhoods in which the mosques are located, an engineer, an inspector and an accountant from the ministry.

He explained that some institutions donate amounts that are not enough to rebuild an entire mosque, so those in charge of the mosque have to request permission the ministry to collect donations from residents. He noted that the ministry was finally able to collect $50,000 for the reconstruction of partially destroyed mosques through a local campaign called “I build you a house in Heaven.”

“Aman-Palestin funded Shafii Mosque, whose first phase of reconstruction was completed at a cost of $3 million. The mosque consists of four floors: one for men, the second for women. The third is used as a center for Quran memorization and the fourth as a conference hall for the neighborhood’s residents,” he said.

He noted that the ministry seeks to reconstruct central mosques in the Strip to be used as community centers, pointing out that the ministry is rebuilding destroyed mosques in a modest and simple way and has not built a basement for most of them, since they cost a lot of money and would give Israel the pretext of claiming that the underground floors are being used for military purposes.

Regarding how the ministry decides which destroyed mosques to focus on, he said, “The donors choose the mosque they intend to rebuild, but when it is left to the ministry to decide, it prioritizes the mosques located in central and densely populated areas.”

Abu Shawish attributed the spread of mosques in the Strip to the ministry being unable to prevent the construction of new ones, although Gaza does not need any more mosques. He noted that approximately 400 mosques were built in the Strip during the past 10 years. He explained that the endowment lands are actually allocated to building mosques either by their owners or by the donors and stressed that the ministry is trying to discourage donors from building new mosques on the land but is forced to grant them permits if they are determined to do so.

He said, “The ministry is not efficiently controlling the geographical distribution of mosques,” adding, “Mosques are mostly built on endowment lands, according to the wishes of their owners, and the ministry cannot use these lands for other projects.”

Abu Shawish explained that the Ministry of Religious Endowments is responsible for building mosques, not building houses or managing aid projects. “Some institutions refuse to donate money for the reconstruction of mosques because it is not a priority for them,” he said.

Meanwhile, economic analyst Samir Abu Mudallal told Al-Monitor that substantial and illogically high sums have been collected for the reconstruction of mosques and there is no need to have multi-story facilities, especially in light of the harsh economic conditions in Gaza. “There are priorities for reconstruction: It is better to build houses for displaced people living in shelters and tents,” he said.

However, Abu Mudallal pointed out that the reconstruction of mosques may have one positive aspect, as it does contribute some to economic recovery and provides jobs for around 40,000 workers in the construction sector.

Doaa Mohammed, a Gazan whose house was destroyed during the Israeli war on Gaza in 2014 and who is currently staying with relatives, believes the government is making an inappropriate judgment by reconstructing mosques instead of destroyed houses, as it could have used these funds to shelter those who were displaced from their homes.

She told Al-Monitor, “The ministry sets a budget for the reconstruction of mosques and send its corresponding application to the donors. The ministry should have requested less money for this purpose since it is unreasonable to build a large mosque at a cost of millions of dollars for a limited number of worshipers.”

Mohammed said she is mostly angry at the government for turning a blind eye to the people’s suffering and focusing its attention on building luxurious mosques.