The upcoming inauguration of a mosque that was built at a cost of $2 million in the cash-strapped Gaza Strip has shocked residents whose homes have been destroyed by the repeated wars. 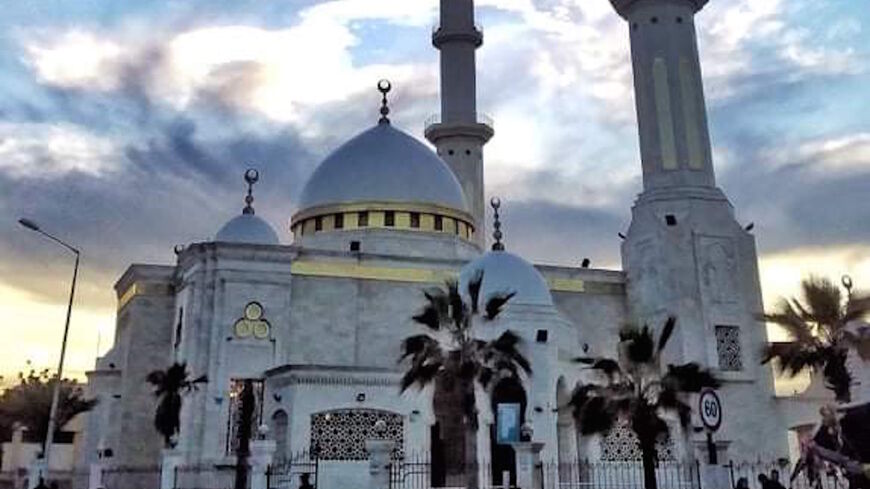 GAZA CITY — Despite the repeated Israeli military operations on the besieged Gaza Strip and the destruction of dozens of homes, the construction of prestigious and luxurious mosques worth millions dollars seems to be on the rise.

In recent years, the construction of luxury mosques has outraged the largely impoverished population of the enclave.

Imam al-Shafei Mosque in al-Zaitoun neighborhood was built at a cost of $3.5 million, and Al-Hassayna Mosque in Gaza City at a cost of more than $2 million. The construction cost of Al-Khalidi and Salim Abu Muslim mosques exceeded $1 million each. The Great Mosque in Khan Yunis is another lavishly luxurious mosque, in addition to Sheikh Ajlin’s Khalil al-Wazir Mosque, which will be opened soon.

Mohammad al-Khalidi, a citizen from Gaza, poured out his resentment of such luxury mosques. “The Ministry of Endowments claims that the donors funding the construction of the mosques want to spend this much money on them. But why would it [the ministry] not inform the donors that there are other fields in Gaza where the donations could be more useful? Mosques can be built at a reasonable cost and the remainder of the donations could be used to build hospitals, schools or residences, for example. A Muslim can pray anywhere that is pure and does not need expensive and lavish decorations,” he told Al-Monitor.

He said, “Any person is free to use his money as he pleases, but citizens have the right to ask how the state’s funds or donations are being spent. We have the right to know why Khalil al-Wazir Mosque and other luxurious mosques were built at such exorbitant costs."

Khalidi added, “The opening of the Khalil al-Wazir Mosque in the coming months will stir an uproar among Gazans due to the large number of mosques already present in Gaza, in the absence of development projects, hospitals and sewage networks. For example, in the Beit Lahia area in northern Gaza, the Salim Abu Muslim Mosque was built at a cost of $1 million, while a nonregulated landfill in the area is endangering the health of the locals and the environment.”

Poverty and unemployment rates in the Gaza Strip skyrocketed to levels exceeding 89% last year, according to the Palestinian Central Bureau of Statistics.

Mohammad Abu Samra, expert on Islamic and Arab affairs, also condemned this phenomenon. “Lavishly decorated mosques are undesirable and unacceptable in light of the difficult economic and living conditions in Gaza, which has suffered many wars causing the destruction of thousands of homes, schools, institutions, associations, factories, mosques, infrastructure facilities and agricultural lands,” he told Al-Monitor.

“It is not logical for families to remain in the open or pay rent because their homes have not been reconstructed yet. It is unacceptable to have overcrowded schools or destroyed factories whose workers have lost their jobs, while we are building luxurious mosques,” he noted.

Although Abu Samra recognized the importance of mosques, he argued that the large number of mosques in Gaza is reprehensible. “Every few meters you find a mosque, constructed at extremely high costs. This goes against the basic purpose of mosques,” he said. “The aesthetic appearance of mosques is important, but we must stay away from extravagance and luxury and take into consideration the residents’ situation and living conditions.”

The dean of Palestine’s Al-Azhar Institute, Imad Hamattu, had in a 2018 statement lashed out at the excessive decoration of mosques as one of Islam’s forbidden acts. He urged the need for setting a modest budget for the construction of mosques.

Hamattu argued that donors ought to focus on people and not limit their donations to embellishing mosques. He urged them to channel their funds for building schools and hospitals, which represent a good deed rewarded by God. He further noted that attention should be paid to needy families in Gaza and to building their destroyed homes.

The Ministry of Endowments provided Al-Monitor with statistics for the year 2021, showing that during the wars from 2008 to 2021, Israel destroyed 113 mosques, 99 of which were reconstructed mostly at high costs.

According to statistics, more than 12,000 housing units were destroyed in the 2014 war, many of which have yet to be rebuilt.

During the latest war in 2021, around 1,447 housing units were completely demolished, and another 13,000 were partially damaged. These were also not reconstructed due to the economic conditions and the lack of funding and support, according to the Ministry of Endowments.

Al-Monitor spoke to Anwar Abu Shawish, director of public relations and media at the Ministry of Endowments and Religious Affairs in the Gaza Strip.

Abu Shawish said the number of mosques in the Gaza Strip has reached 1,230. “Khalil al-Wazir Mosque will be opened soon. It is funded by the Malaysian nongovernmental organization Aman Palestin, which is overseeing the construction works. Donors often require that their funds be allocated for the construction of mosques and we must comply.”

He added, “During 2021, we provided aid worth $10 million to poor families whose homes were destroyed. The aid was in the form of in-kind donations, cash, food parcels and payment of rental contracts.”

He explained that the ministry sets criteria for building mosques. “For example, the distance between any two mosques should not be less than 500 meters [1,640 feet],” he said. “The construction of some mosques was financed by personal funds, such as Al-Hassayna and Al-Khalidi mosques. In addition, the ministry oversees the restoration, maintenance and reconstruction of ancient mosques such as the Great Omari Mosque.”

Abu Shawish wondered why the construction of mosques at such costs would cause such a fuss. “How much does the construction of a stadium or a cinema cost?” he asked. “When money comes to the ministry, we consider spending on the needed projects. When the donations are not needed, we direct them toward other aid-related projects. However, we are sometimes bound by the financing parties’ request to build mosques. Some of them even require mosques to be built over large surface areas.”

He noted that the construction of luxurious mosques is an aspect of urban and civil planning that does not contradict Islam. Abu Shawish invoked the rule that an endowment shall be used for the purpose it was designated for. “It may not be replaced for any other purpose, such as relief for the poor or other projects,” he concluded.