Engineer Imad al-Khalidi has developed a replacement for cement to help the Gaza Strip deal with its housing crisis, after the Israeli war left many homes damaged or destroyed and in the face of Israel continuing to prevent the entry of construction materials. 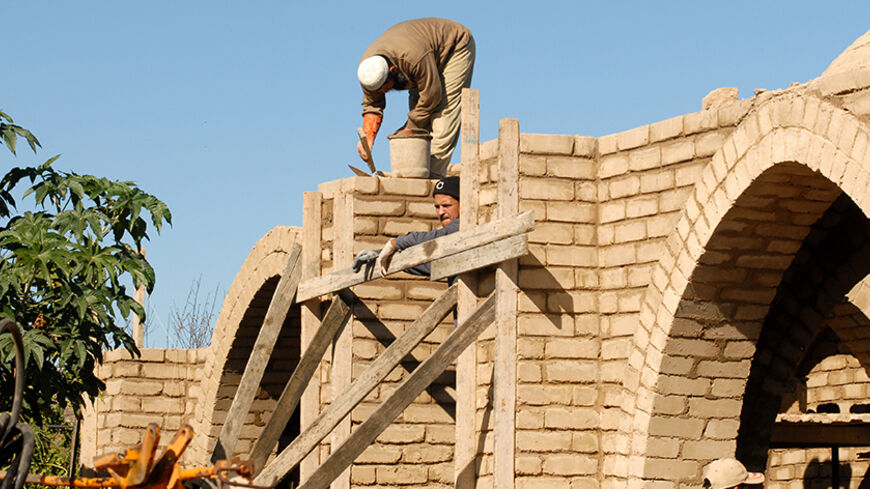 GAZA CITY, Gaza Strip — Salameh Bihar, 56, who was displaced after Israel destroyed his house in Gaza's Shajaiya neighborhood in the recent war, is still waiting to rebuild his three-story house. But he is not optimistic about succeeding.

He explained to Al-Monitor that materials are expensive and difficult to obtain. “The way construction materials are entering Gaza is unfair. For instance, a cement unit is worth 27 shekels [$6.70] for affected citizens, but how are they supposed to afford its price when their homes are destroyed? Moreover, the unit cost exceeds 150 shekels [$37.50] for average citizens [not affected by the war], which raises the price of construction operations,” he explained.

Gazans who had their homes destroyed in the war have been complaining about the slow reconstruction process and the lack of entry of building materials.

The pressing needs of Gazans has inspired innovators to develop solutions through available tools. Three successive Israeli wars in the last six years have devastated the Gaza Strip, most recently the war in July that destroyed or damaged more than 84,000 houses.

Engineer Imad al-Khalidi may have found a temporary solution to help alleviate the lack of construction materials, prevented by Israel from entering the Gaza Strip. In 2008, he started to conduct experiments on natural materials to be used in construction instead of cement, and succeeded in creating a new technique.

Khalidi, a soil expert in organic architecture, said that the search for alternatives was based on materials found in Gaza. “We wanted to use local materials as an alternative, to save ourselves and provide the displaced with shelters, as nearly 5,000 housing units were destroyed in the 2008-2009 war. We examined various types of soil in Gaza, and found a suitable type rich in natural welding materials, such as potassium carbonate, magnesium, metal oxides, limestone and sand,” he explained.

He pointed out that the natural materials he found act like cement in its different stages, but they are more solid and can last hundreds of years.

Khalidi explained the process: “We compose a homogeneous mixture by conducting a soil treatment through pressure, to which we add welding natural materials such as potassium carbonate, ground limestone powder and a small quantity of gypsum, to form an initial coherent product in the brick production. Yet, the strong cohesion begins after it is used and continues to solidify for hundreds of years, and to harden dozens of times more than its initial form. This means that the brick increasingly hardens with time, and has its own characteristics.”

Khalidi established in 2009 his own private factory to produce local bricks in different sizes. At first, he designed machinery operated manually, then he created hydraulic machinery. “We have evolved, and we are now only relying on automated pressure systems. As some donor institutions demanded services to accommodate those affected by the wars, the work has increased in our factory with a production capacity reaching up to 50,000 bricks per day,” he said.

Khalidi said that after he developed his new product, he started working in small workshops, as there was a lack of oil and electricity. But today, he owns another factory. “We have developed a technique to be able to produce bricks without the need for any kind of power, by using the same materials and introducing some improvements so that we can overcome the power crisis,” he added.

Although the material from which the brick is produced is solid, Khalidi believes that it does not consist of a substitute for traditional materials. The long blockade has prevented the reconstruction of destroyed homes, not to mention the natural population increase in the Gaza Strip, which, according to Khalidi, requires 80,000 housing units to be built over the next five years. 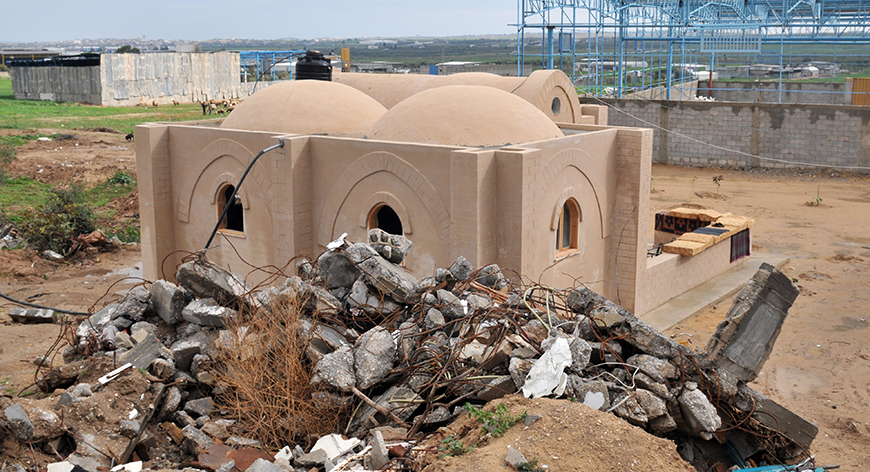 “The significant devastation in Gaza is accompanied by a new and great challenge, namely the provision of shelters. There would be at least 3,000 trucks loaded with construction materials in the Gaza Strip per day, in case there is a serious will to rebuild. For this reason, we are currently using this new technique only to help provide shelters,” Khalidi said.

Khalidi has kept the price the same as cement for locals looking to build homes, while upping the price for commercial projects. “The price per square meter ranges between $350 and $400 for ready-to-move-in private construction projects, and between $150 and $160 per square meter for shelter projects. As for the ordinary citizens who did not suffer any damages [to their homes] and would like to build their own home, it will cost them $220 [per square meter], which is the same price as cement.”

Safwat Mushtaha, chairman of Mushtaha and Hassouna Co., a construction company in Gaza, said that modern technology can help in light of the shortage of traditional construction materials because of the Israeli blockade.

Mushtaha told Al-Monitor that by using the new product, “the owners of destroyed homes will save 25% of the original cost of the building process with traditional materials.”

While Khalidi’s product is yet another example of Gazans exploring innovative solutions to help cope with the crippling Israeli-Egyptian blockade, it is no replacement for the need to end the siege.