In the absence of funds and construction materials, which delayed the reconstruction process in the Gaza Strip, Palestinians are resorting to relief associations that provide them with temporary wooden houses. 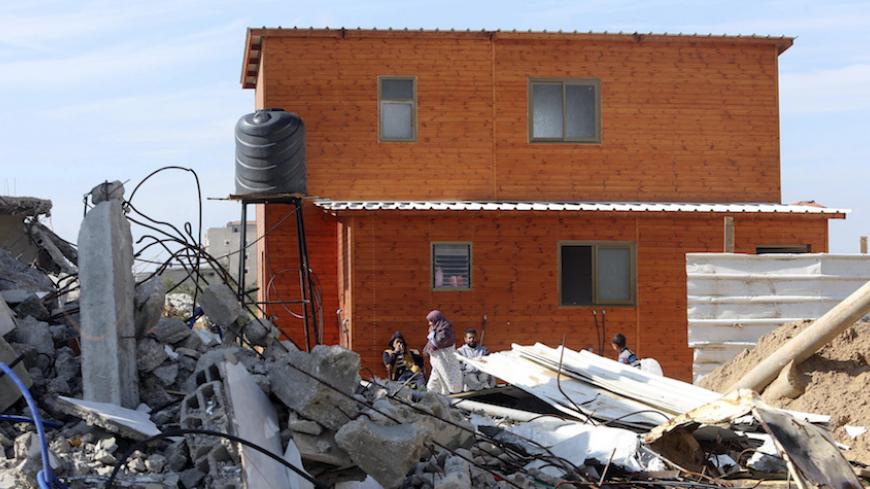 A group of Palestinians whose house was destroyed during the 50-day war last summer sit outside their wooden shelter donated by the Catholic Relief Services, east of Khan Yunis in the southern Gaza Strip, Feb. 16, 2015. - REUTERS/Ibraheem Abu Mustafa

KHAN YUNIS, Gaza Strip — Palestinians whose homes were destroyed during the last war on the Gaza Strip in July-August 2014, did not expect their suffering to last more than six months. Yet, they still do not know when they will be compensated and when their homes will be rebuilt, amid growing doubts that their suffering will last longer in light of the current political situation.

Ahmad Barakeh’s two-story house, with four apartments housing 11 family members, was destroyed. He hesitated when he was offered a temporary wooden house next to his destroyed concrete house, because he feared that this temporary house would end up being his permanent one.

Gazans are not used to building and living in wooden houses. Because of the high cost and shortages of land in Gaza, large families live in multi-floor concrete buildings that house the grandparents, children and married sons and their families.

Barakeh, who lives in al-Zanna neighborhood east of Khan Yunis, accepted after much contemplation a local organization to build him a new wooden house. He came to the conclusion that rebuilding his concrete house will probably take years as the entry of funds and construction materials into Gaza is obstructed.

Barakeh told Al-Monitor, “Look, this is my house that was destroyed during the war. It is still the same as it was then, nothing is left of it. I did not look for a refuge for my family and I, and we cannot afford renting a house.”

“A two-story wooden house keeps me warm in winter and cool in summer, which is better than living in a tent. I live with my wife, my two daughters and two of my unmarried sons. My other three [sons] rented homes to live in with their wives,” he added. 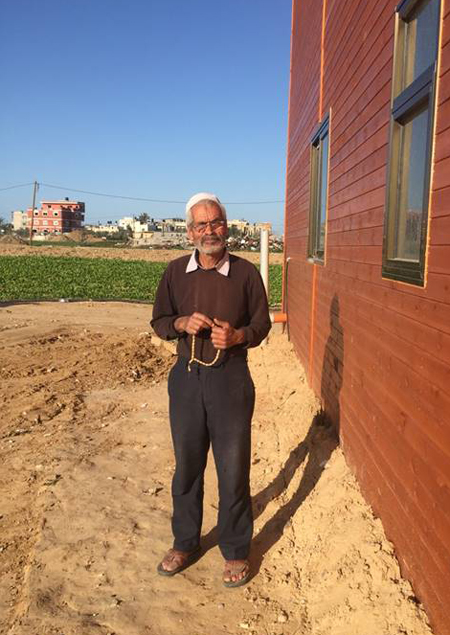 Ahmad Barakeh, standing in front of his wooden house that was built two months ago as a temporary alternative to his concrete destroyed house in al-Zanna, March 3, 2015. (Photo by: Hazem Balousha)

The Catholic Relief Services (CRS) built a modern two-story house made of wood next to Barakeh’s old destroyed house, with two bedrooms, a kitchen and a bathroom on the first floor and a living room on the second floor.

CRS told Al-Monitor that the wooden houses it builds are not replacements for the original houses. They are a temporary refuge for those whose old houses were completely destroyed or have become uninhabitable, until their concrete houses are reconstructed.

Matthew McGarry, the CRS country representative, told Al-Monitor, “Sadly, we are aware that the reconstruction of concrete houses might take time, based on our experience in rebuilding relief centers after disaster situations. This is what we are doing in Gaza. We have built safe, sufficient and dignified places for families to live in until their permanent houses are reconstructed.”

The reconstruction process in Gaza has been delayed due to the lack of funds pledged by donors during the conference held in Cairo on Oct. 12, 2014. The entry of construction materials into Gaza is also delayed because of the Israeli restrictions and the political bickering between Hamas and Fatah.

In January, the United Nations Relief and Works Agency for Palestine Refugees in the Near East stopped providing financial aid allocated to the reconstruction of destroyed houses in the absence of financial sources. The organization released a statement that read: “We have received almost nothing from the $5.4 billion that was pledged during the donor’s conference held in Cairo in October 2014. This is very sad and unacceptable.”

In border areas that witnessed massive destruction, Palestinians are temporarily living in mobile homes built by relief organizations. But these trailers were inundated due to the heavy rain and storms that have hit the region this winter. The more disadvantaged families are forced to live in parts of their houses that were completely destroyed, while others have erected tents to live in.

Palestinians in Gaza do not have access to construction materials, except through the international mechanism adopted by Israel, the UN and the Palestinian government, known as the “Serry mechanism,” in reference to UN Mideast envoy Robert Serry’s proposal. Some materials can be found on the black market, but prices are exorbitant.

He added, “We buy the cement from those who got it through the UN to rebuild their houses that were partially destroyed, as they are in dire need of money to cover their daily expenses. These people are also unable to pay the workers who are fixing the parts of their houses that have been destroyed."

Oxfam, the international confederation of 17 organizations working worldwide, expressed its concern about the reconstruction of the Gaza Strip, worrying that the process might take 100 years should the entry rate of construction materials remain the same and should the siege continue.

On Feb. 26, Oxfam noted in a statement that less than 0.25% of trucks transporting basic necessary construction materials arrived in Gaza in the past three months. The situation is worsening still, more than six months after the cease-fire was announced. The Gaza Strip needs more than 800,000 trucks transporting the materials necessary for rebuilding houses, schools, hospitals and infrastructure, all of which were destroyed during the recurring armed conflicts over the years and the ongoing blockade. In January 2015, only 579 trucks entered Gaza.

According to official statistics issued on Nov. 21, 2014, by the Ministry of Public Works and Housing and international organizations, during the 50-day war on Gaza more than 28,000 housing units in all the Gaza areas were destroyed — 3,329 of which were completely destroyed and 1,592 were partially destroyed but are inhabitable.

Barakeh might be luckier than others since he now has a roof over his head, even if it is a temporary wooden roof. “I am probably lucky to have this house. It is a small house but it’s nice. I will be waiting for the day when I can build my concrete house. Only then will I be able to reunite my whole family. But I feel sorry for those who have nothing,” he said.