The Egyptian government presented a draft bill to parliament to change the conditions of the use of endowments, which raised the ire of Al-Azhar. 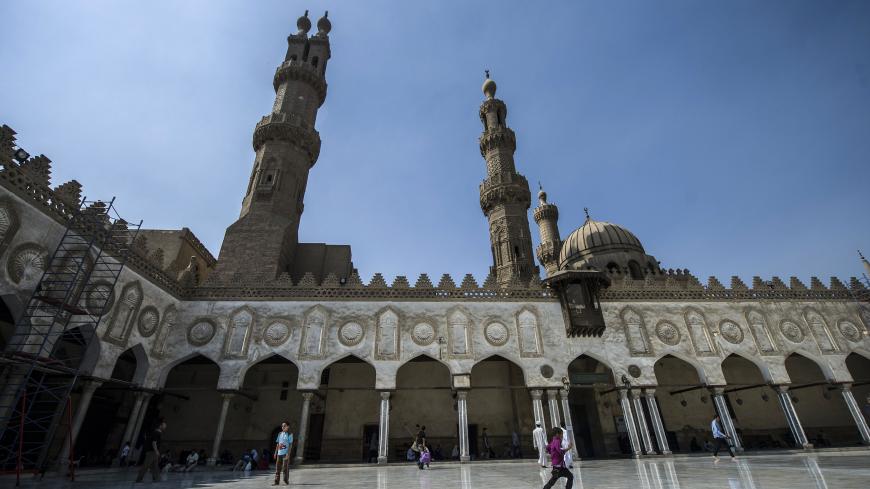 CAIRO — Cairo, known as the city of a thousand minarets, actually has over 3,000 mosques, and the country as a whole is home to over 100,000 Muslim houses of worship. Over 80,000 of these are controlled by the country’s Ministry of Religious Endowments, yet a recently published plan could pit the government’s strategy against the wishes of Al-Azhar, Egypt’s top religious authority.

Most of Egypt’s mosques were buildings donated by their owners to the state on condition that they would not be sold or leased but turned into mosques. This conditional donation is known as a “waqf,” or endowment.

On April 13, the Egyptian Sawt al-Umma newspaper published an article about the government’s plan to reinvest in some of the endowment properties in a different manner to change and ensure optimal purpose of use, despite Al-Azhar's rejection of the new law. Does this suggest that the relationship between the government and Al-Azhar is heading down a conflictual path?

Endowment includes the donation of buildings on condition that they are used as churches, orphanages or schools, while sometimes people donate agricultural lands, plots, real estate or bank deposits for the benefit of a specific person, a group of people or a community, such as families or villages.

In 1954, however, the state confiscated the endowments and announced that they are to be used for the public interest rather than the benefit of a certain group of people or a specific person, with the exception of mosques and churches that continue to be in the service of Muslims or Christians only.

Since that year, endowments have been under the supervision and management of the Ministry of Endowments, in accordance with the conditions set by the original owners with regard to the purpose of use.

The ministry tries to make a profit from the endowments in such a way to cover the facilities’ overheads and development projects as well as the salaries of their employees. According to the most recent data in January, the endowments’ assets reached about 180 billion Egyptian pounds (roughly $10 billion).

As the endowments’ assets increased, the state began to seek to amend their conditions. On Feb. 14, the government submitted to parliament a draft law allowing the prime minister to amend the condition of the purpose of use of any endowment facility in such a way to be used for the public benefit.

In an effort to pass the law, parliament discussed it at a meeting in the parliamentarian Religious Affairs Committee and sent a copy of it to Al-Azhar for assessment. In an official statement March 28, Al-Azhar rejected the bill, describing it as contradictory to Islamic law.

Hundreds of social media activists reacted to the statement, showing solidarity with Al-Azhar. One social activist expressed his fear that the state would change the purpose of use of some endowments that are now designated as mosques.

This prompted the Religious Affairs Committee to state in an official statement April 1 that it will no longer look into the bill and will work on finding alternative solutions to modify the endowments’ conditions.

In this context, Al-Azhar Deputy Imam Abbas Shoman told Al-Monitor, “It is not permissible to change the endowments’ conditions because they are not owned by the state, which runs them according to the conditions of their original owners. This was agreed upon by all previous and current Islamic scholars.”

Meanwhile, Abdul Fattah Idris, a former professor of comparative jurisprudence at the University of Al-Azhar, told Al-Monitor that changing the endowments’ conditions for the betterment of the community is not contradictory to Islamic law, stressing that confiscating the endowments in the 1950s and changing their targeted beneficiaries from one specific person or one group of persons to the public community is also seen as changing the donations’ conditions.

“If the state wishes to change the endowments from being for the benefit of a group of people to the benefit of the public then it might as well change their purpose of use. Properties can be turned into a hospital serving thousands of patients, a school or a large investment project whose proceeds would go to the poor, for instance,” Idris said.

Jaber Tayeh, head of the Religious Department in the Ministry of Endowments, told Al-Monitor, “The ministry is against the draft law to change the endowments’ conditions because this would harm Egypt’s reputation to such a great extent, spurring talks that Egypt has become so poor that it is leasing or selling its endowments.”

Osama Abu al-Magd, a member of the Religious Affairs Committee, told Al-Monitor, “Parliament respects Al-Azhar’s take on the draft law and will look into alternative solutions. The state is mainly considering a property swap with the Ministry of Endowments. For instance, the state could swap a mosque located in an industrial area for another endowment facility in a different area that could be used as a mosque.”

Seif al-Din al-Marsafawi, an independent political sociology analyst who has expressed opposition to President Abdel Fattah al-Sisi, said that the draft law is likely to be the end of “the honeymoon of Sisi and Al-Azhar.”

He told Al-Monitor, “The regime’s attempts to control all state resources — including Al-Azhar’s endowments — is likely to cause tension between the two, as the latter will consider this as an infringement on its property."

He also expected Al-Azhar to galvanize other religious institutions, including the church, to take action against the law.

Yusri al-Azabawi, a political science researcher at Al-Ahram Center for Political and Strategic Studies, said that it is unlikely for the government or parliament to pass the law without the approval of Al-Azhar because the state upholds the principle that Al-Azhar and the church are partners, not rivals to the state. This means that the law is unlikely to pass without Al-Azhar’s approval, Azbawi said.