What Israel must understand about Gaza

Israel is oblivious to warnings by the United Nations and the IDF intelligence directorate over the ever-desperate situation of Gaza residents. 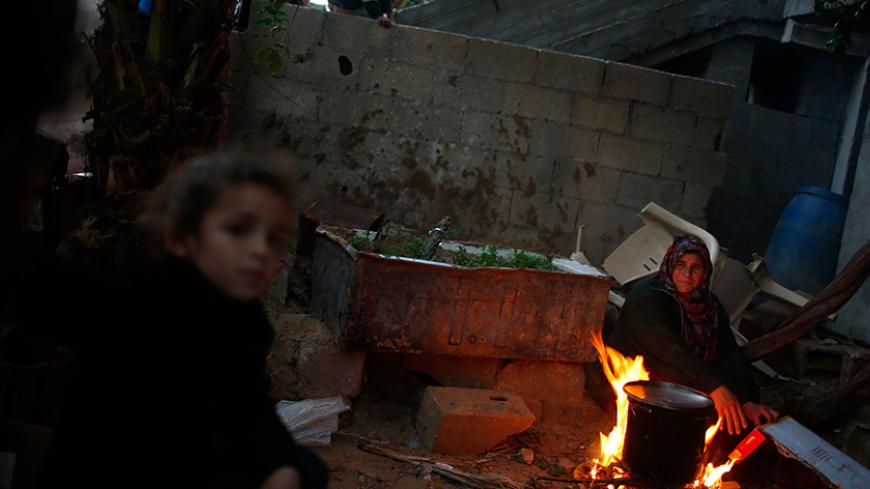 A Palestinian woman burns firewood to cook at her house in the northern Gaza Strip, March 20, 2014. - REUTERS/Mohammed Salem

It is hard to understand why the members of the Knesset's Foreign Affairs and Security Committee were surprised at the report of the head of the Israel Defense Forces’ (IDF) military intelligence directorate, Gen. Herzl Halevi, who said at a Feb. 23 hearing, “The humanitarian condition in Gaza is progressively deteriorating, and if it blows up, it’ll be in Israel’s direction.” Where were the Knesset members in recent years, when reports from the Gaza Strip painted a very grim picture of almost 2 million residents living under siege, in terrible economic distress, in unemployment, in ruins, in frustration and in depression? If not for the food banks run by the United Nations Relief and Works Agency for Palestine Refugees in the Near East, the Gaza Strip would have already become a humanitarian catastrophe and many of its residents could have died of starvation.

Have any members of the most prestigious committee of the Knesset bothered to read the UN report published in September, which determined that if current trends continue, Gaza could become uninhabitable by 2020? Or perhaps they thought of the report as another anti-Israel publication from the United Nations. In contrast to these Knesset members, from what the chief of military intelligence said it seems he has actually adopted the report’s conclusions.

If any Knesset member thinks that this is a long-term prediction, he must remember that the year 2020 will arrive in only four years — one year after the official date of the end of the Knesset’s current term.

The Gaza Strip is under a blockade Israel has enforced since the Hamas revolution in June 2007. Since 2013, the border between Gaza and Egypt has also been closed and sealed. In recent months, the Israeli media has hardly reported on the humanitarian situation in Gaza. One story did find a place in the inner pages of Israeli newspapers: the grim situation of the animals dying in the Gaza zoo. It seems that a photo of a dying tiger does better in the Israeli press than destroyed neighborhoods and barefoot children in Gaza’s refugee camps. We can assume that only a few decision-makers and newspaper readers in Israel made the obvious connection between the state of the animals and the state of humans in the territory.

On Feb. 18, journalist Asmaa al-Ghoul wrote an article for Al-Monitor about the spate of suicides in Gaza. Helpless young people who had been suffering unemployment for years, with no other choice and no future, have been killing themselves.

“We’ve never had such a phenomenon,” said my friend who lives in Gaza, on condition of anonymity. “Do you know the significance of suicide in a traditional Muslim society? The black mark it paints on the family? But I’m living while all around me many youths — close and distant family members and neighbors — think about death. They don't think about dying as martyrs, but dying of hunger and of shame.”

The biggest problem in the Gaza Strip, as in the West Bank, is the situation of young people. According to a World Bank report published in May 2015, unemployment in Gaza is the highest in the world, estimated at 43%. Among young people the problem is even more severe, where the rate of unemployment rises to 60%. What’s even worse is that no one sees any sign of possible improvement in the future. On the contrary.

The Gaza Strip has always been a difficult and crowded place. The only profession that promised young people a livelihood and a future were the fields of journalism and media. Until a number of years ago, Gaza was considered a place that creates news for media outlets around the world, especially for the Arab media. Lacking any industry or commerce, the creation of news became the main field that hundreds of families lived on in the Gaza Strip. Tens of thousands of young people flooded the universities and colleges in Gaza in order to learn the skills that were most in demand, and dreamed of a prestigious position at one of the Arab media networks — Al Jazeera, Al Arabiya or Al-Quds. Even Hezbollah’s Al-Manar was a suitable option for work.

Unfortunately, even this profession is dying in Gaza. Since the last round of violence with Israel ended in August 2014, the world is no longer interested in Gaza. The Arab and international media networks are flooded with stories from Homs and Hama in Syria. The situation of refugees flooding to Europe is more interesting than the situation of the Gazans. One of my journalist friends in Gaza told me on condition of anonymity, “I don’t want a war, I don’t wish for any one of us to experience what we’ve experienced here three times already, but it’s sad that Gazan journalists can only live on war and starve for bread when there’s quiet.”

Seven universities and an additional number of colleges in the Gaza Strip have trained thousands of journalists who also remain without work. With nothing else to do, they have bought cameras and hope to take one good picture that they could sell to one of the Gaza-based news networks. These days, even a couple dozen dollars could change their lives for a short time.

Ahmed, 24, a resident of Gaza City, bought a tiny camera and started walking every day to the border between Israel and Gaza in the hope of taking a good picture that would cover his debts. A few weeks ago, he was shot in the foot as he approached the border. When his family asked him why he had endangered his life for a photo, he answered that this is his only option to make a living. Ahmed told Al-Monitor that there are many hundreds more despairing youtng people like him, all graduates of the prestigious Islamic University in Gaza City. They also hoped to make a living in the only promising profession left, and were disappointed to find out that apparently they won’t be able to do so.

An initiative of frustrated Palestinian young people is forming on social media: to move in one large group toward the border with Israel, in the hope that the IDF will not stop hundreds or even thousands of people. But for now, the Hamas checkpoints standing near the sites of friction with Israel are no less a deterrence for them.

The present lull in violence will not last for long. Even before the outbreak of the youth intifada in the West Bank, some thought that Palestinian exhaustion and security coordination with Israel in the West Bank would prevent violence. But despair has its own plans. If the young people of the West Bank — whose situation is significantly better than that of those who live in Gaza — rebelled against the Palestinian Authority and started a new wave of violence, what assurance is there that Hamas, despite its disinclination to engage in another conflict with Israel at this stage, could stop a similar outbreak in the Gaza Strip? And what would Israel do if tens of thousands of unemployed and hungry Palestinian young people massed at the border fence? Would the members of the Foreign Affairs and Security Committee be surprised then? At that point, despite the warning of the chief of military intelligence, would Israel once again solely blame Palestinian incitement and Hamas propaganda? Israeli leadership must understand that the siege policy only defers and deepens the problem — it does not evade it. This is the time to act, before, as Halevi said, the Gaza Strip explodes.