Despite very recent hostilities, Palestinians see a glimmer of hope in reports that a truce could allow Gazans to work inside Israel, even as conditions keep deteriorating in the besieged enclave. 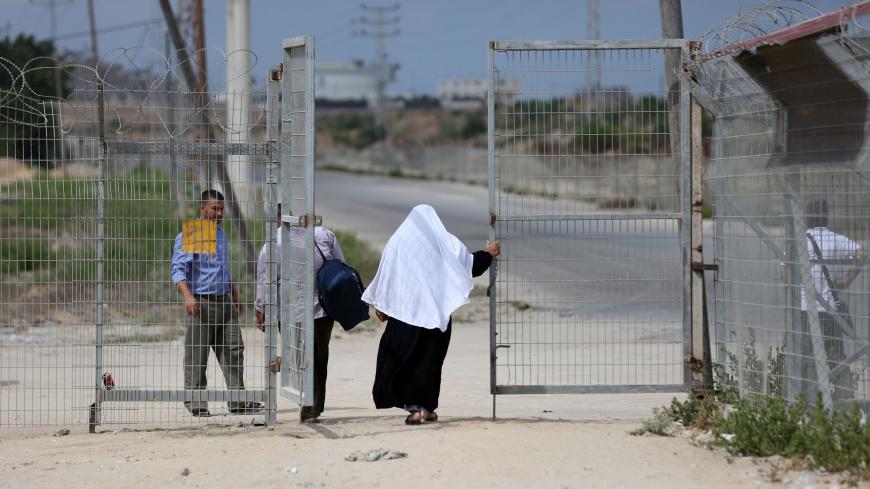 Palestinians pass through the Erez crossing with Israel near Beit Hanoun in the northern Gaza Strip, Aug. 27, 2018. - MAHMUD HAMS/AFP/Getty Images

Palestinian factions in the Gaza Strip said Nov. 13 that they would agree to a cease-fire, possibly ending their fiercest exchange of rocket attacks and airstrikes with Israel in several years and allowing for a long-term truce that could help alleviate rampant unemployment in the strip.

The Associated Press reported the attacks had continued throughout a six-hour meeting Nov. 13 of Israel's State Security Cabinet. During that meeting, the cabinet had ordered the military to use whatever force was necessary against Hamas and the other factions.

Within about an hour of the meeting's end, the factions announced they would accept an Egypt-mediated cease-fire if Israel also agreed. Israel had not commented.

Egypt, Qatar and the United Nations have been working relentlessly to secure political and security understandings between Israel and the factions. Many proposals are being made to achieve calm, such as easing the Israeli blockade on the Gaza Strip, improving living conditions and increasing hours of electricity. Just last week, Israel allowed Qatar to provide $15 million in cash for Hamas civil servants, who hadn't been paid in months.

The State Security Cabinet had also held a lengthy session Nov. 4 to discuss the situation in the Gaza Strip and to consider allowing thousands of Palestinian workers from Gaza to work in Israel. During that meeting, Israeli Public Security Minister Gilad Erdan and Education Minister Naftali Bennett both approved of the proposal, saying they don't support tightening the noose on Gaza, which has been suffering under Israeli sanctions and the blockade for more than a decade. They said Gazans should be allowed to work inside Israel to prevent worsening relations with Hamas.

However, Shin Bet, Israel's internal security agency, has long opposed the idea. In July, it declared that Gazan workers pose a serious threat to Israeli security because Hamas may seek to recruit some to carry out deadly operations inside Israel.

On Nov. 4, Haaretz published a draft of a truce agreement between Hamas and Israel that includes, among other things, Israel allowing a first batch of 5,000 workers to enter. As for entrance dates, Israel is waiting until the truce efforts are completed.

The economic situation in Gaza is at its worst and the living conditions have reached unprecedented levels of hardship, making the proposal of allowing Gazans to work in Israel a welcome idea, though some skeptics downplay the proposal's value.

“By allowing thousands of Palestinian workers in, Israel wants to show the world that it alleviates Gaza’s distress, but the actual impact of this step is minimal, because Palestinians will be working in the [low-paying] agricultural field alone,” Osama Nofal, director general of the Planning and Policy Department at the Ministry of Economy in Gaza, told Al-Monitor.

Heads of Israeli towns adjacent to the Gaza Strip have demanded that the Israeli defense ministry grant permits to Palestinian workers from Gaza to work in agriculture inside Israel, because there is a real need for agricultural workers.

But Nofal said more changes are necessary: “To solve the unemployment crisis, the Gaza crossings need to be opened and significant projects within the strip need to be established. We have discussed this with international delegations that arrived in Gaza in recent weeks."

Ibrahim Saleh, an unemployed construction worker from Gaza, told Al-Monitor, “The Gaza Strip workers have suffered a lot since the siege was imposed [in 2007]. The Palestinian governments [Hamas in Gaza and Fatah in the West Bank] have neglected us. Today we see a glimmer of hope in allowing us to work in Israel. We used to get paid $100 per day in Israel before the siege, now we have to wait months to get $100 in humanitarian aid.”

Like the Economy Ministry's Nofal, Mohammed Mekdad, dean of the Faculty of Commerce at the Islamic University of Gaza, also thinks more efforts are needed.

“Allowing thousands of workers from Gaza into Israel will contribute to alleviating poverty and unemployment [to an extent], but facing unemployment effectively in Gaza requires that the Palestinian government budget allocates a certain amount for specifically this purpose," he told Al-Monitor.

"In addition, the sanctions that the Palestinian Authority [in the West Bank] imposed on Gaza need to be lifted, along with the [Israeli blockade]. Gaza should be granted the freedom of import and export. Currency needs to be introduced and the strip requires immediate reconstruction.”

Various parties have been discussing the possibility of Israel employing Gazans since December. At that time, Israeli Labor Party leader Avi Gabbay said the plan would help reduce the unemployment rate in the strip and fill the Israeli shortage in the fields of construction and agriculture. In March, Palestinian Labor Minister Mamoun Abu Shahla and his Israeli counterpart, Haim Katz, also discussed the issue.

In July, Mohammed al-Emadi, the Qatari ambassador to the Palestinian territories, announced an initiative to improve the humanitarian situation in Gaza that included the employment plan in return for an agreement to ease tension at the Israeli borders.

However, there's still a lot of reluctance, and outright opposition, among some Israelis to Gazans working in Israel.

"Israeli security services are against allowing Gazan workers into Israel, fearing their association with [militant] Palestinian organizations," Islam Shahwan, a security expert and former spokesman for the Interior Ministry in Gaza, told Al-Monitor. "Even if they end up agreeing, the workers will be subjected to tight security measures to ensure they won't have any connection to the resistance.”

He added, “Those allowed to enter would have to meet specific conditions to make sure they wouldn't carry out any armed attacks [in Israel]."

Meanwhile, Hamas might be concerned about Israeli intelligence recruiting these workers to obtain security information about the Palestinian factions. Hamas and other factions have yet to comment on the possibility.

While Palestinians welcome the employment proposal, experts say more efforts must be made to alleviate high unemployment. These measures include the introduction of more goods and raw materials, streamlining security inspections at the crossings, increasing the capacity of the Kerem Shalom crossing and opening the Karni crossing east of Gaza.

“If thousands of Palestinian workers are allowed in Israel, we can expect economic breakthroughs and reduced unemployment rates. The Gaza Strip doesn't have commercial and economic projects that can absorb the hundreds of thousands of unemployed people. We don't have access to Arab countries and we have no other option but to work in Israel," he said.

Employing Gazan workers in Israel wouldn't benefit just Palestinians. Israelis would make the most of the quality of the Palestinian labor force. And Palestinians' wages are cheap compared with those of Israelis and workers from other countries. In addition, Palestinian workers spend their salaries in the Palestinian market, which consumes Israeli products.