The coronavirus crisis reveals the dependence of the Palestinian economy on its Israeli counterpart, especially with regard to workers and the sources of income of thousands of families in the West Bank and Gaza Strip. 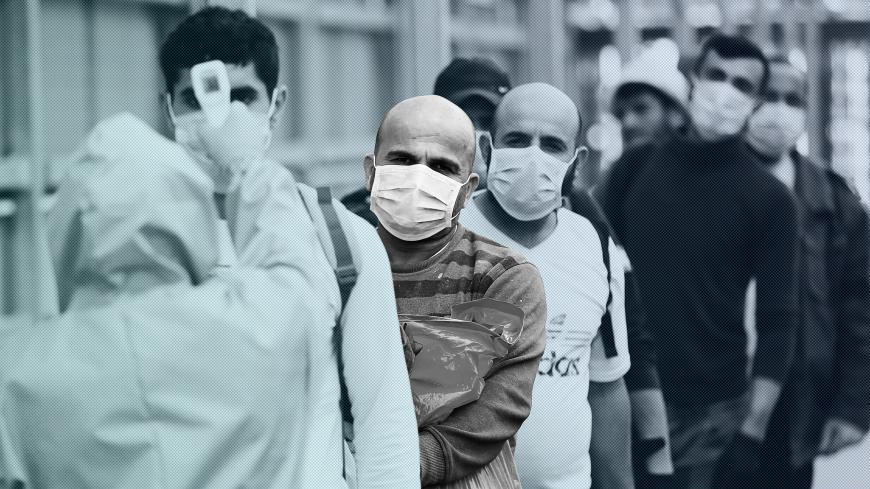 A health-care worker checks the body temperature of Palestinian workers returning from Israel, amid concerns over the spread of the coronavirus, outside the Israeli-controlled Meitar checkpoint, West Bank, April 7, 2020. - REUTERS/Mussa Qawasma

Ever since the coronavirus outbreak in late February in both the Palestinian territories and Israel, several sectors have been successively affected, most notably the Palestinian economy, which the virus revealed to be fully dependent on Israel and its decisions. This is especially true with regard to Palestinian workers in Israel and the sources of income of tens of thousands of families in both the Gaza Strip and the West Bank, which showed the Palestinian Authority's (PA) clear failure to provide local economic alternatives.

Ghassan al-Khatib, former Palestinian minister of labor and planning in Ramallah, told Al-Monitor, “Both before and after the coronavirus outbreak, Palestinians have been under the control of Israel, and they are completely dependent on its economy despite attempts to disengage from it. However, a large number of Palestinians work in Israel, which also controls our crossings, hence the negative consequences on our economy. Add to this the political consequences of such dependence.”

Unlike the West Bank, the number of Gazan workers and merchants working in Israel only amounts to 5,000 people, hence their limited contribution to the local economy.

However, Gaza markets are living in a state of fear after imports from China and Turkey have ceased; Gaza imports phones, computers, toys and clothes among other items. The repercussions of the pandemic on Gaza’s economy will eventually be felt, especially after commercial stocks run out, which will leave a heavy financial burden on traders who are already suffering from the economic situation and the low purchasing rate. As a result, traders will be forced to increase their prices, which in turn, will affect consumers.

Osama Nofal, director of planning and policies at the Ministry of Economy in Gaza, told Al-Monitor, “Since the beginning of the pandemic, which led to a delay in the arrival of foodstuffs to Gaza from Israel due to the security and health measures, we have decided to increase our imports from Egypt to make up for the shortage in the Gaza Strip. The agricultural situation in Gaza is better than the West Bank, as we are self-sufficient in terms of vegetables, and we intend to export [to the West Bank] in response to many requests we received due to the lack of Israeli goods, high prices and scarcity of goods there. The government agencies in Gaza provided incentives worth $1 million to support farmers, preserve food security, provide silos for wheat and diversify foreign import sources.”

On March 23, the Ministry of Agriculture in Gaza decided to stop the export of agricultural products abroad in a bid to prevent monopolization in the local markets and the increase of prices. Also, the export of flowers from Gaza has been halted, dealing a heavy blow to farmers who already suffered losses after event halls in Gaza have been closed.

Palestinians in the West Bank are complaining that after tens of thousands of workers returned from Israel, they started to face a serious problem of declining purchasing power due to the lack of cash liquidity. Also, the PA is preventing its citizens from moving from one city to another while economic institutions are closed and commercial projects are suspended. These are factors that will increase the level of poverty at a time when revenues are continuously declining.

Mohammed Abu Jayab, economist and editor of economic newspaper Al-Eqtesadia in Gaza, told Al-Monitor, “There is clear evidence of the Palestinian commercial dependency on Israel. The health measures adopted at Israeli airports, crossings and ports have widely affected Palestinians as they have impeded the arrival of imported products through such facilities. Also, Palestinians have been negatively affected by the declining value of the Israeli shekel over the past weeks, as most Palestinians are paid in shekels while their debt and loan obligations are in dollars. This has affected their ability to settle their debt. After Israel banned in February the export of Palestinian goods through its ports, Gaza suffered major losses as it was unable to export tons of crops and vegetables.”

In light of the difficult economic situation, sewing factories in Gaza have begun manufacturing protective face masks and exporting them to Israel, thus providing jobs to hundreds of workers. These factories are producing some 50,000 masks daily.

A World Bank report revealed April 17 that if the coronavirus crisis and its economic symptoms continue, and if the Palestinians remain prohibited from working in Israel, the Palestinian economy will shrink by 7%.

These estimates bode ill for the Palestinian economy and portend a serious economic collapse the Palestinians cannot afford. This may require a gradual return to greasing the economic wheels by adopting measures that reconcile the health precautions with the economic requirements.

Naser Abdel Karim, an economics professor at the Arab American University of Jenin, told Al-Monitor, “The coronavirus crisis has increased the Palestinian economic dependence on Israel, especially after the Palestinians complained about the fact that their workers have stopped going to Israel amid a decline in foreign trade movement due to the Israeli control of the crossings. This has put their ability to provide goods and food at risk. The PA — unable to provide economic alternatives to its citizens — has concerns over the eruption of a popular Palestinian revolt against the economic closure and the emergence of an anarchic and disorganized economic activity, which will make it difficult for it to control the movement of money in the market.

Palestinian Finance Minister Shukri Bishara announced April 12 a request to Israel to obtain a loan of 500 million Israeli shekels ($141 million) per month until the end of the coronavirus crisis.

The PA’s financial crisis, including the dropping revenues and the decreasing commercial activity, will inevitably affect the Gaza Strip. Although the PA paid the salaries of its employees for the month of March, there are expectations that the PA will soon be unable to fulfill its obligations in the absence of financial liquidity caused by the drop of local taxes and the decreasing international donations. This will increase the budget deficit and will eventually affect the Gaza Strip.