Israel and the Palestinian Authority have agreed on the conditions for the return of some 50,000 workers, mostly in the construction sector. 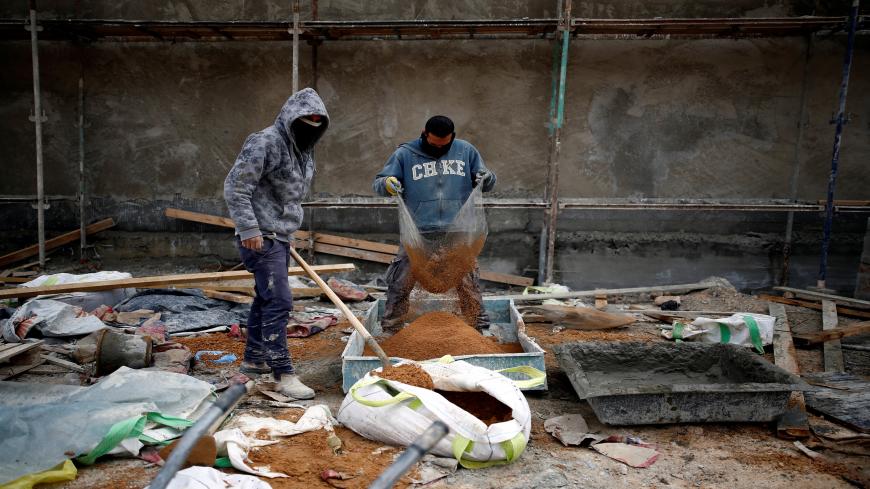 Palestinian construction workers work at an industrial site in the Israeli settlement of Mishor Adumim, in the West Bank, Dec. 24, 2016. - REUTERS/Amir Cohen

After the exchange of words in April between Israel and the Palestinian Authority (PA), following accusations of senior PA officials that Israel is purposely spreading the coronavirus among Palestinians, things seem to have calmed a bit, and the new arrangement to allow Palestinian workers into Israel attests to this. The arrangement is meant to rescue the Israeli construction industry from a harsh blow because of the shortage of workers, and to provide economic relief to tens of thousands of Palestinian families.

The start of the coronavirus outbreak actually saw close cooperation between Israel and the PA. Palestinian medical personnel entered Israel from the West Bank and from the Gaza Strip, with Hamas’ permission, in order to receive training to treat the virus that causes COVID-19 at Barzilai Hospital in Ashkelon and Shiba Hospital in Tel Hashomer, which are now specialized medical centers.

Israel transferred a great amount of medical equipment to the PA, most of it aid that arrived from abroad, and shared supplies from Israeli emergency stockpiles in order to help the Palestinians prevent a wide outbreak of the pandemic. Such an outbreak could have been a real humanitarian disaster because of the small number of ventilators in hospitals in the West Bank and Gaza — about 250 in the West Bank and 90 in Gaza — and the crowded conditions in refugee camps.

The contact between the Israeli Ministry of Health and Palestinian Minister of Health Mai al-Kaila, a doctor by profession, grew closer, and any equipment or help she requested soon arrived. But after it became clear that some of the Palestinian patients caught the virus in Israel, while working, some senior PA officials made provocative statements, and the PA mouthpieces, such as the daily Al-Hayat Al-Jadida, published columns and caricatures in this vein. One showed an Israeli soldier shooting corona bullets at a Palestinian village. Abdallah Kamil, governor of Salfit region, accused ultra-Orthodox Jews of spreading the coronavirus purposely among Palestinian workers, and even Palestinian Prime Minister Mohammad Shtayyeh claimed that soldiers are spreading the virus intentionally among Palestinians by spitting at cars at checkpoints.

Israel responded forcefully to these accusations. The Coordinator of Government Activities in the Territories, the senior contact person with the Palestinians, Maj. Gen. Kamil Abu Rukon, warned in a message April 16, “We are witnessing and being exposed to all sorts of unfounded claims from senior PA officials, verging on defamation and slander of the Israel Defense Forces, the security establishment, the State of Israel and the Israeli public. These shameful statements have no basis or foundation and completely contradict reality and the Israeli devotion and willingness to help, as much as possible, in regional efforts to stop the spread of the pandemic in Israel and the Palestinian arena. We see these statements and accusations as crossing a red line and damaging the enormous efforts made in Israel for the sake of the common challenge and crisis that has visited the entire region. I call on the Palestinian leadership to take back these baseless statements and caution that they could have ramifications on various areas.”

A practical step and a warning sign from Israel was the refusal of the request of the East Jerusalem power company that provides electricity to all of the West Bank to freeze its debts to the Israel Electric Company in light of the coronavirus crisis.

In the past 10 days, things have calmed a bit, with the help of the mediation of United Nations envoy to the region Nickolay Mladenov, especially because of the urgent common interest of the two sides to allow the workers to get back to work in Israel. Before the pandemic, about 130,000 Palestinian workers were employed in Israel as well as in the West Bank settlements, mostly in construction, manufacturing and agriculture. They bring in a large part of the income in the Palestinian market, and the salaries they earn are much higher than the average salaries in the West Bank. Without them, the Palestinian market would be nearly paralyzed. Most of the foreign workers who were in Israel at the start of the pandemic — Chinese, Turks and other nationalities — have returned to their countries, and construction has been halted. According to the Ministry of Construction and Housing, every day that passes without workers costs the Israeli market between 100 million to 130 million Israeli shekels ($28 million to $37 million); indirectly the damage is even greater.

In March, Israel permitted about 60,000 Palestinian workers to enter, most of them in construction, but also in health care and agriculture. Leading up to the Passover holiday (April 9) most workers returned home, some of whom were infected with the coronavirus taking it into PA-administered territories — thus supplying "ammunition" to its officials. Most of the claims had no real basis, but the fact was that some workplaces did not take precautions with proper protective gear.

Ali Matnaja, a worker at a factory in an industrial zone in north Jerusalem, told Al-Monitor that the factory’s management didn’t provide protective measures, didn’t distribute masks and gloves, and didn’t separate workers. This worker and more than 10 of his coworkers at the factory were infected by an Israeli worker who turned out to be sick with the virus.

Thus, in contacts between PA and Israeli representatives more stringent conditions and limitations were set for returning to work. According to the agreements, Israel and the PA coordinated the entry of about 50,000 Palestinian workers for early this week. The workers will stay within the Green Line for three weeks until Eid al-Fitr (May 24), the holiday that concludes the month of Ramadan.

Workers who will enter will be checked for the virus at their place of work in Israel, which will be the responsibility of employers, who will guarantee this, and they will receive authorization to spend the night in Israel for the month of Ramadan. The workers will stay in groups of up to 10 and will receive protective gear such as masks and gloves, and will stay for the entire time either in the building they are working on or in other sleeping quarters provided by their employer. Medical staff will check the workers every few days, and their temperature will be taken at the beginning and end of the day. The workers will receive their salaries as a direct deposit into their bank accounts, and not in cash, so that their families could use the money while they stay in Israel.

However, Israel refused the request of the PA to provide health care for workers infected with the virus, and so any workers who fall sick will return to the West Bank and get treated there.

This arrangement is part of the Israeli and Palestinian attempt to return, even partially, to normal, and it attests that when there is mutual interest the two sides know how to talk. But there is suspicion and doubt between the sides, and Israel’s intention to annex West Bank settlements more than suggests that the practical cooperation on the coronavirus will not see a continuation on the diplomatic level.