The Palestinian government has asked workers in Israel to return in light of the spread of the coronavirus in Israel and the mistreatment of Palestinian workers. 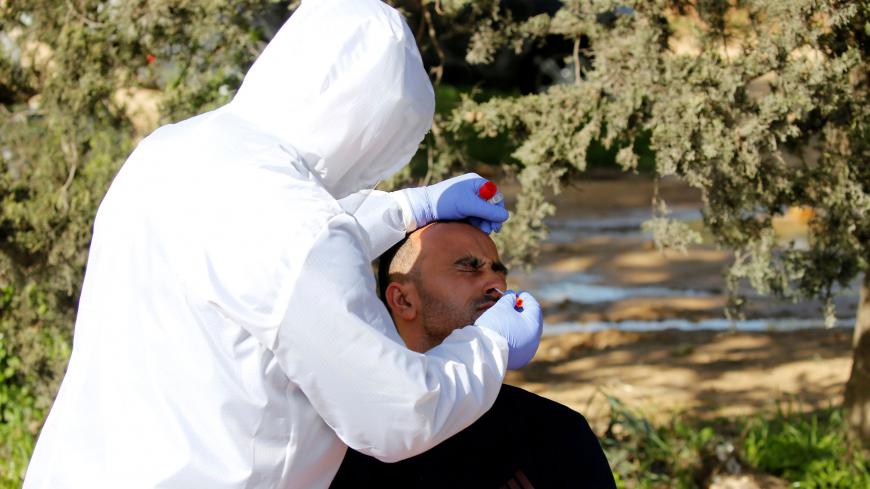 A medical staff member swabs the nose of a Palestinian worker to test for the coronavirus upon his return from Israel, outside the Israeli-controlled Tarqumiya checkpoint, near Hebron, Israeli-occupied West Bank, March 26, 2020. - REUTERS/Mussa Qawasma

RAMALLAH, West Bank — The town of Biddou 10 kilometers (6 miles) northwest of Jerusalem has become the new coronavirus epicenter in the Palestinian territories after the death of a 60-year-old woman due to COVID-19 on March 25. Her son, who works in Israel, had transmitted the virus to her. Meanwhile, 21 cases have so far been recorded in the town, prompting Jerusalem Gov. Adnan Ghaith to announce the complete isolation of Biddou on March 26.

The virus quickly spread to the nearby village of Qatanna, which recorded 20 cases of the coronavirus on April 1, with the total tally of infections in the West Bank and the Gaza Strip reaching 134, including one death and 18 recoveries.

Palestinian workers in Israel represent the loophole that threatens to foil all of the Palestinian government’s measures to prevent the spread of the virus. A man from the village of Artas working in a petrol station in the Gush Etzion settlement north of Bethlehem contracted the virus and later transmitted it to his mother and three other people in the village.

On April 1, Palestinian government Spokesman Ibrahim Melhem announced the infection of 15 Palestinians working at a poultry factory in the Atarot settlement area; the workers hail from villages in Ramallah. Those infected had mixed with other Palestinians inside a number of nearby villages, Melhem said.

The first death from COVID-19 in the West Bank sounded the alarm among Palestinians, especially when it comes to workers, prompting Prime Minister Mohammed Shtayyeh on March 24 to call on all Palestinian workers in Israel to return to their homes for their safety.

Addressing the heads of the Palestinian security services, Shtayyeh stressed that all workers returning from Israel must undergo a 14-day home quarantine, calling on workers to communicate with the nearest health center should they experience any symptoms and threatening everyone who violates the instructions with legal accountability.

Melhem said at a press conference on March 26 that Palestinian workers inside the 1948 borders constitute a loophole for the outbreak of the disease, noting that Shtayyeh will issue instructions to tighten measures to protect villages near Israeli crossings and that more severe decisions will be taken to limit movement as the number of cases increases.

Thousands of Palestinian workers responded to Shtayyeh's call and decided to leave work and return to their villages and cities in the West Bank. The Palestinian security services and medical staff were waiting for them at the Israeli checkpoints, where they underwent preliminary checkups, had their temperatures checked and their clothes sterilized before they had to go into compulsory home quarantine.

On March 29, Shtayyeh said an agreement had been reached with the General Union of Palestinian Workers to allocate 10 million shekels ($2.8 million), with a similar amount to be provided by the government, to be distributed to workers and the unemployed as per a mechanism the union will announce later on.

Shtayyeh said the next two weeks will be crucial as more than 35,000 Palestinian workers are expected to return from Israel, adding that necessary measures have been taken to help them.

Many factors prompted Palestinian workers to return to the West Bank, the most important of which is Israeli forces’ inhumane treatment of workers suspected of being infected with the virus. A March 23 video showed Israeli soldiers dumping a worker at the Beit Sira checkpoint near Ramallah because he had a fever, without informing Palestinian authorities. The worker lay on the ground for three hours before the ambulances arrived to take him to the hospital, where he tested negative for COVID-19.

Palestinian workers were further urged to return to their homes because they have no suitable places to stay overnight inside Israel and are afraid of transmitting the virus to their families — as happened in Biddou — should they keep going back and forth.

Adel Ghaidan, 27, from Qibya, a village west of Ramallah, had been working at an aluminum factory in the Kanot Israeli industrial zone for seven months. He is married and has a child. On March 26, he decided to return to his village after remaining at his workplace for 10 days.

Ghaidan, who made his wife and child leave the house in order to protect them while he is home quarantined, told Al-Monitor, “I quit work for many reasons, most importantly because Israeli employers do not provide suitable places for workers to stay overnight; over 12 workers sleep in two small rooms that lack basic health requirements.” He said workers have to buy their own food and drinks, which means they have to be in contact with Israelis and foreigners in an area that has reported several coronavirus cases.

Banan Saqr, 28, from the village of Kafr al-Labad in Tulkarm, married with two children, returned to his village on March 26 through al-Taybah crossing after working in construction in Netanya for seven years. “When I came back, I contacted the local emergency committee in my village to tell them about my return so I could get tested,” he told Al-Monitor.

Saqr spent the first day of his return in his brother's unfinished house while he waited for his home to be prepared for quarantine. He noted that his wife and children managed to leave the house and stay elsewhere, and he had to quit work in Israel after many cases were recorded in Netanya and given the Israelis' negligence and lack of concern for the safety of workers, which terrified him.

Mohammed Imad, 26, from the city of Jenin, has been working in a fast-food restaurant in the Arab city of Kafr Qara for four years. “We work with the utmost caution; we do not make contact with others, and we only make meals based on orders,” he told Al-Monitor, adding, “We try to benefit from still being able to work because we might need the money later to cover our financial needs, especially in light of reports of Israel's intention to completely shut down [restaurants], which means I will be out of work.”

Imad pointed out that the conditions of the place he stays at are very good, but he admits that the increasing number of cases in Israel really scares him, in addition to being pressured by his family to return home.

Speaking to Al-Monitor, Palestinian Deputy Minister of Labor Samer Salameh described the workers in Israel as “a ticking time bomb” because Israel did not apply health and safety standards to workers, pointing out that Israel has indicated its willingness to provide suitable accommodation for workers, but it later became clear that overnight accommodations are in miserable condition, which prompted workers to return home.

On March 17, Israel formally decided to allow thousands of Palestinian workers to stay beginning March 18 for a period of one or two months without returning to the West Bank, provided that overnight accommodations are made available by employers. But as more infections were recorded among the workers, Palestinian official calls for their return increased — although thousands of them remain in Israel.

Salameh said the places provided for overnight accommodation were overcrowded, which increases the possibility of the virus spreading among workers; the proof is the infected workers from Biddou and Artas.

He noted that the Ministry of Labor, in cooperation with trade unions and the Ministry of Health, began deploying on March 25 crews and volunteers to 11 West Bank entrances used by workers coming from Israel in order to conduct preliminary checkups for incoming workers and to stress the need for their commitment to home quarantine.

Salameh explained that the next 14 days — the home quarantine period — is very crucial to know the extent of infection among workers.