The Palestinian government in the West Bank has escalated its precautionary measures on Palestinian workers returning from Israel in order to prevent further spread of the coronavirus. 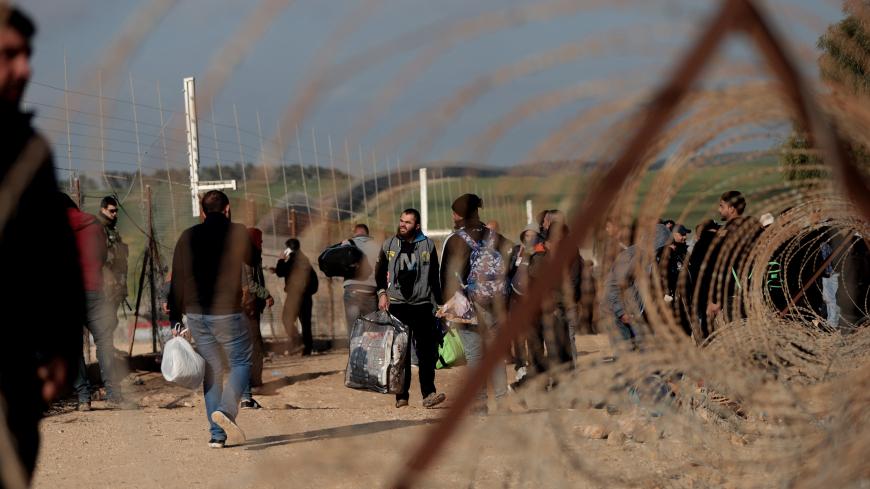 Palestinian workers try to enter Israel through a checkpoint between the West Bank city of Hebron and Beersheba, March 22, 2020. - Mamoun Wazwaz/Xinhua via Getty

GAZA CITY, Gaza Strip — In order to prevent the spread of the coronavirus, the Palestinian government in the West Bank has been taking tighter precautionary measures for Palestinian workers returning from their workplaces in Israel. However, many of those laborers preferred to stay in Israel for weeks to protect the sources of their livelihoods and to prevent the possible infection of relatives in the West Bank. This comes as the government announced March 25 the first coronavirus death in the West Bank, of a woman who caught it from her son who works in Israel.

Palestinian Prime Minister Mohammad Shtayyeh demanded March 24 that all Palestinians working in Israel return home in light of the increasing number of infection cases in Israel. As of April 2, 6,808 cases of infections had been recorded in Israel, with 34 deaths. Meanwhile, 160 cases had been confirmed in Palestine after 15 Palestinian workers returning from Israel tested positive April 1; 12 of the 160 cases were recorded in the Gaza Strip.

Abu Fadi from Gaza is a construction worker in Israel who decided to stay there. He told Al-Monitor, “My Israeli employer promised [to give me a] suitable place to sleep so I can stay in Israel. But I was sleeping in the workplace, so I rented an apartment with my other friends … to complete my daily work”

He added, “My employer is afraid of being infected with COVID-19; he stopped coming to the workplace and bringing us food."

The first coronavirus case in the Palestinian territories was confirmed March 5 in Bethlehem after a group of Palestinians came in contact with Greek tourists who tested positive after they returned home.

Ahmed from Nablus escaped poor work conditions in Israel after the spread of the infection and returned to the West Bank. He told Al-Monitor, “The government can’t provide quarantine places for all laborers; some of those who went home might not obey the self-quarantine role. This is a risk for people.”

Meanwhile, there are expectations that movement between Israel and areas under control of the Palestinian Authority will be restricted to prevent the virus' spread.

Most of the crossings were shut down to prevent the virus from spreading further into the Palestinian territories. During a meeting March 17 with the emergency committee formed to deal with the coronavirus, Shtayyeh revealed there is coordination with Egypt and Jordan to fully close the bridges and crossings in both directions, except for the movement of goods and humanitarian cases, in accordance with the safety measures agreed upon.

Palestinian government spokesperson Ibrahim Melhem told Palestine TV March 17 that “the movement of workers inside Israel and the crossings are the loophole that could lead to an outbreak of the virus in Palestine.”

The governor of Salfit in the central West Bank, Maj. Gen. Abdallah Kmeil, said March 26 that “any Palestinian worker arriving from [Israel] who did not abide by the 14-day self-quarantine period as instructed by the government to prevent the spread of the coronavirus will be treated as a premeditated criminal and murderer.”

“The male family members of the worker who violates the rule of self-quarantine will be arrested in case it is proven that they knew he was breaking the rule and did not notify the relevant authorities,” said Kmeil.

In the same vein, Kmeil issued additional instructions and inaugurated workshops to train security staff on how to deal with workers coming from Israel or Israeli settlements, as well as other suspected cases of COVID-19 in the detention centers or quarantine centers set up at the entrances to towns and villages in the Salfit governorate.

The Palestinian Central Bureau of Statistics figures for the third quarter of 2019 show there are about 141,000 workers in Israel — 72% have a work permit, 22% do not and 6% hold an Israeli card or a foreign passport.

Although a large number of workers have abided by the return precautionary measures imposed in both the West Bank and Gaza Strip, some have opted to remain in Israel. Palestinian Minister of Labor Nasri Abu Jaish said in press statements March 19, “It was agreed with the Israeli side to keep 75,000 [Palestinian workers] in Israel under safe health conditions and decent work conditions.” He noted that most of the Israeli employers, however, did not hold up their end of the deal.

Palestinian General Federation of Trade Unions Secretary-General Shaher Saad told Al-Monitor, “The government formed several teams to be deployed at the Palestinian crossings to conduct health checks for workers coming back from Israel.”

Saad added, “After such inhumane practices were exposed and documented, and in order to avoid being seen dealing inhumanely with the Palestinian workers, the Israeli employers are dropping infected workers at night, despite their poor health conditions.”

Abu Shadi, a 42-year-old worker from Ramallah, said he has been working in Israel for 15 years. “Working in the construction field is my only source of livelihood. That is the only way I provide for my family. I have to stay there for weeks, and I agreed with my employer based on that,” he told Al-Monitor.

Mahmoud Abu al-Rub, an economics professor at An-Najah National University in Nablus, told Al-Monitor, “There are [thousands of] workers employed formally and informally in Israel, generating $1 billion to $1.2 billion per year. [The precautionary measures] will have an impact on the Palestinian economy. The whole economic situation in general will be affected by the spread of the coronavirus, which affected the great economic powers as well.”

by Murielle KASPRZAK and Joseph SCHMID | AFP | May 26, 2022
END_OF_DOCUMENT_TOKEN_TO_BE_REPLACED