The Israeli authorities have decided to prevent Palestinian construction workers who are crucial for the Israeli construction sector from commuting from and to the West Bank for fear that this could help spread the coronavirus in Israel. 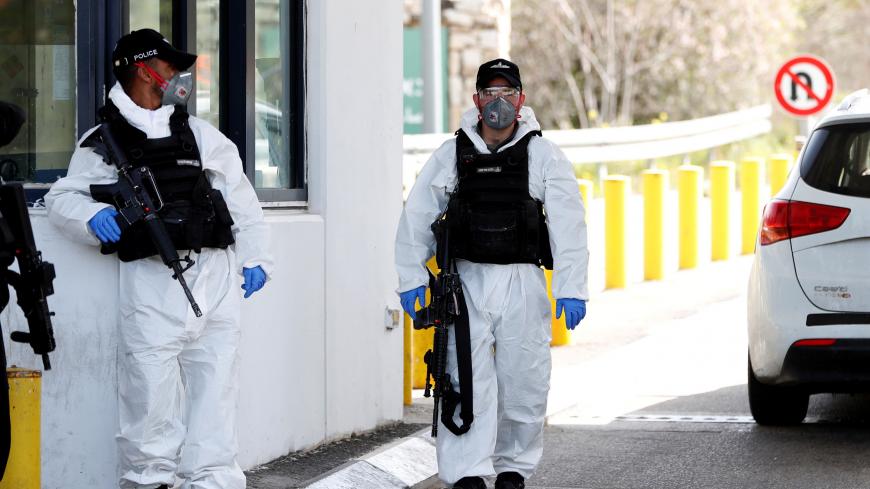 Israeli border policemen wearing protective gear as a precaution against the coronavirus, guard at an Israeli checkpoint in the occupied West Bank on the outskirts of Jerusalem, March 11, 2020. - REUTERS/Ronen Zvulun

RAMALLAH, West Bank — Israeli Defense Minister Naftali Bennett decided March 17 that as of March 18, Palestinian workers and merchants from the West Bank would be allowed into Israel provided they sleep for one to two months in Israel with the employer providing lodging.

The continuous increase in the number of coronavirus cases in both Israel and the West Bank, and the Israeli measures taken to confront the virus and prevent its spread have taken a toll on Palestinians working in Israel.

On March 11, Israel announced that Palestinian workers and merchants over the age of 50 would not be allowed in from the West Bank. The measures entered into effect on March 12.

Ghalib al-Saleh, 55, from Jenin, works in the construction sector with an Arab contractor in the city of Caesarea. On March 12, he went to al-Taybeh crossing in Tulkarm, one of the largest crossings between Israel and the West Bank, to enter Israel, but the soldiers at the crossing did not allow him in.

“This decision applied to all workers above the age of 50,” he told Al-Monitor.

Palestinians over the age of 55 are usually allowed to enter and work in Israel without a permit, unlike other age groups that need permits from the Israeli authorities, such as work permits often issued for constructors, or commercial and agricultural permits. People looking for jobs inside Israel also need permits from the Israeli authorities, and permits are usually valid for a few days only.

However, under normal circumstances, none of these permits allow Palestinian workers to sleep in Israel once their work day is finished, so Palestinians return to the West Bank every evening.

Abu Mohammed, 52, who is from Jenin, told Al-Monitor on condition his full name not be used that after being prevented from entering through al-Taybeh crossing on March 12, he was forced to enter illegally through what Palestinians call “al-fatehat,” meaning "gaps" in the wall.

“This decision will lead us to incur heavy losses. We have dues and we need several days’ worth of wage in order to cover the price of our permits,” Abu Mohammed said.

It seems the Israeli move to allow tens of thousands of Palestinians to spend one to two months inside Israel aims to avoid a blow to the Israeli economy, especially the construction sector.

A report published March 6 by the Israeli financial newspaper Calcalist warned of the losses that the construction sector might incur if Palestinian workers are not allowed to enter Israel, and added that estimates indicate that if the 65,000 Palestinians working in the construction sector are not allowed in then this would lead the Israeli gross domestic product to lose a monthly amount of 4.56 billion Israeli shekels ($1.18 billion), as a result of delays in the delivery of roughly 70,000 apartments.

Palestinian workers in Israel are among the most prominent factors that may contribute to the rapid spread of the virus, be it in the West Bank or Israel, due to their large number, their daily overcrowding at crossings and checkpoints, their contact with Israeli employers and their daily movement between the West Bank and Israel.

Of note, the first case of the coronavirus was reported on March 9 in the city of Tulkarm, in the northern West Bank, and it was a worker in Israel who had been infected by his Israeli employer.

Despite the political rupture between the Palestinian Authority and Israel, coordination between the two sides is in full swing regarding the means to confront the coronavirus, especially considering that the Palestinian government realized that workers may be a dangerous factor in the transmission of the virus.

As he explained to Palestinian President Mahmoud Abbas on March 10, Prime Minister Mohammad Shtayyeh said that the tens of thousands of Palestinians who work in Israel are the biggest problem facing Palestinians to stop the spread of the virus, especially considering that this issue is difficult to deal with.

Shaher Saad, secretary-general of the Palestinian General Federation of Trade Unions, told Al-Monitor that many Palestinian workers had been asked by their Israeli employers to be ready to stay in Israel.

Saad pointed out that some workers have managed to rent apartments near their workplaces in order to avoid returning to the West Bank, while others have set up sleeping areas at their workshops.

The one positive outcome of this decision, he added, is that it allows workers to maintain their jobs and provide for their families. However, there are several negative aspects that need to be considered. Chief among these, he said, is the high risk of infection among workers and the high cost of living in Israel compared to the West Bank. This, he said, shrinks the amount of savings Palestinian workers would be able to make.

In case a Palestinian worker gets infected it is unclear where and how they would be treated, but the two sides are said to maintain a high level of coordination in this regard.

Saad pointed out that despite the circumstances, Israel is clinging to Palestinian workers because the construction sector would collapse if constructors are not allowed in. He concluded that if one Palestinian worker sleeping in Israel is infected, this would create panic among other workers.