When the crisis surrounding the coronavirus is finally over, Israelis and Palestinians alike will realize that it is possible to do things differently and cooperate in various areas. 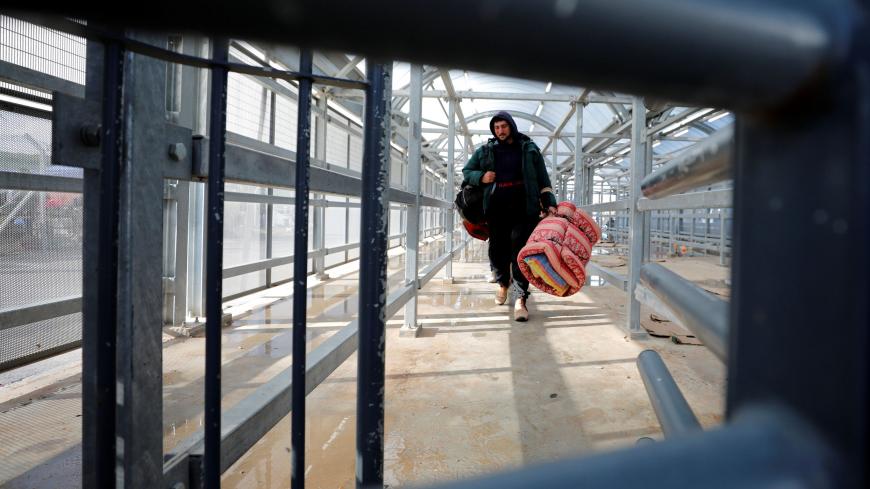 A Palestinian man heads through an Israeli checkpoint to work in Israel. The Palestinian Authority ordered Palestinians working in Israel to stay at their workplaces over concerns of the spread of the coronavirus, near Hebron, Israeli-occupied West Bank, March 18, 2020. - REUTERS/Mussa Qawasma

Permits to stay in Israel overnight were given to tens of thousands of Palestinian laborers as part of a deal reached between the Palestinian Finance Ministry, with the approval of the Israeli security services and the Office for the Coordination of Government Activities in the Territories (COGAT). According to this agreement, reached in response to the novel coronavirus, Palestinian workers will be allowed to work in Israel on the condition that they stay for at least two months. In order to prevent the virus from crossing from one region to the other and to prevent the spread of the virus at border crossings, they would not be allowed to cross back into Palestinian territories during that time. The Union of Contractors in Israel and the Farmers' Federation of Israel made a promise to Minister of Civil Affairs in the PA Hussein al-Sheikh via COGAT that Palestinian workers would be provided with appropriate housing and their employers would ensure proper sanitary conditions are maintained.

Will it actually happen? Most of the workers who took the leap this week and left for what they consider to be the “unknown” have serious doubts about it. It is, after all, the kind of relationship between an employer and his workers when the employer suddenly discovers that the situation has changed abruptly and he now has to accommodate workers who spent the night in their own homes until now. On the other side, the Palestinians realized that if they reject the living conditions provided by their Israeli employers, they would be out of work and unable to support their families.

Taiser Abd el-Rahim, who lives in the Nablus area, told the news website Ynet that while he is afraid of being infected with the coronavirus, he has no choice but to continue working in Israel. “My family is waiting for me to provide them with food,” he explained, while noting that he would have to cover the cost of his accommodations out of pocket. “Maybe my employer could find a place for me [to sleep] for a night or two or three, or even a week, but any longer than that and it will start to take a toll on him. In the end, I’ll pay for it myself to ensure that I have a proper place to sleep. None of the workers crossing the border feels good about it. They are all terrified of the virus. It’s very possible that three days from now, someone will be infected by the virus. Then, if he returns [to the West Bank], his whole family could die.”

The decision to allow Palestinian workers to sleep in Israel was made by Prime Minister Benjamin Netanyahu, with the backing of his defense minister, Naftali Bennett. It was an unprecedented decision, highlighting how interconnected the Israeli and Palestinian economies are. In fact, they can’t really be separated. If the decision had not been made right now, the construction and agricultural sectors of the Israeli economy would have collapsed immediately. Every day, some 120,000 Palestinians with work permits enter Israel from the West Bank, while tens of thousands more sneak in without work permits.

The Israel Defense Forces (IDF) will impose more stringent controls to prevent people from crossing the border illegally and spending the night in Israel. If the IDF turned a blind eye until now, the risk of the coronavirus spreading has forced them to tighten their control of the border. Obviously, it is impossible to be absolutely sure that none of the Palestinians with permits to spend the night in Israel has been infected by the coronavirus. Still, Israel’s fear of an economic catastrophe had prompted the various ministries to make sensitive decisions more quickly than usual.

When push comes to shove, Israel relies on working hands. If, for instance, the construction industry collapses, it will bring down many other industries with it. Even now, hundreds of thousands of Israelis have turned to Social Security for help. It is doubtful that existing institutions will be able to help all those who need it for a long period of time.

Concern for the state of the Israeli economy was not the only factor behind this decision on Palestinian workers. It was also motivated by serious apprehensions about what is happening in the PA concerning the coronavirus. Coordination with PA President Mahmoud Abbas on issues relating to health has been conducted by the staff of the Civil Administration. “The system has been in operation almost from day one. It started as soon as both sides realized that this was a pandemic and there was a risk of a dangerous outbreak,” a source in the Israeli security establishment told Al-Monitor on condition of anonymity. “People at the top really did make a difficult and even bold and courageous decision,” said the source.

What this means is that after all the endless discussions between Israel and the PA, all the economic crises and all the various and sundry political decisions on both sides of the divide, it took a virus to get something done.

Agreements reached by the professional teams in Israel and the PA have the backing of the political leadership on both sides. While Netanyahu, Bennett and just about any other minister in the current transition government will not speak with the Palestinians let alone meet with them, Finance Minister Moshe Kahlon does. In fact, he is the only Israeli minister to have a steady relationship with his Palestinian counterpart, Shukri Bishara. The two of them even met March 16. The problem is that once a new government is formed in Israel, Kahlon will leave his position and retire from politics. To his credit, it must be said that he was able to maintain a relationship of unparalleled importance with the Palestinian finance minister. It is not at all certain that such a close relationship will continue once a new government is formed.

Politically, Netanyahu and his ministers have found it convenient, under normal circumstances, to humiliate Abbas every chance they get and talk about how the PA supports terrorism. It may even benefit them politically. But Netanyahu, Bennett and others — including Bennett’s predecessor, Avigdor Liberman — are well aware of the importance of close security coordination with the Palestinians, which has so far managed to survive all crises and threats. It is on the basis of this security coordination that Israel and the Palestinians now cooperate in all sorts of other areas.

The one person who understands better than anyone how pressing it is for Israel and the Palestinians to work together efficiently is Israeli President Reuven Rivlin. On March 18, Rivlin called Abbas and said, “Our ability to work together in times of crisis is also testament to our ability to work together in the future for the good of us all.” It doesn’t take much to imagine what Netanyahu would have said in different times and circumstances had he heard through the media that Rivlin called Abbas. He would have turned the whole story into a political smorgasbord of censure and condemnation, all to serve his own needs. But this week was different. Netanyahu didn’t even react.

It may not lead to peace, but once the coronavirus crisis is over, Israelis and Palestinians will both realize that it is possible to do things differently. “Petty politics” is a phrase that Netanyahu likes to use to poke fun at his opponents. But it also led to the deterioration of relations between Israelis and Palestinians. Both parties have been paying the price for that for a very long time.