Even as Israel and the Palestinian Authority are cooperating to prevent both the spread of the coronavirus and an economic crisis in the Palestinian territories, Palestinian Prime Minister Mohammad Shtayyeh is promoting conspiracy theories against Israel. 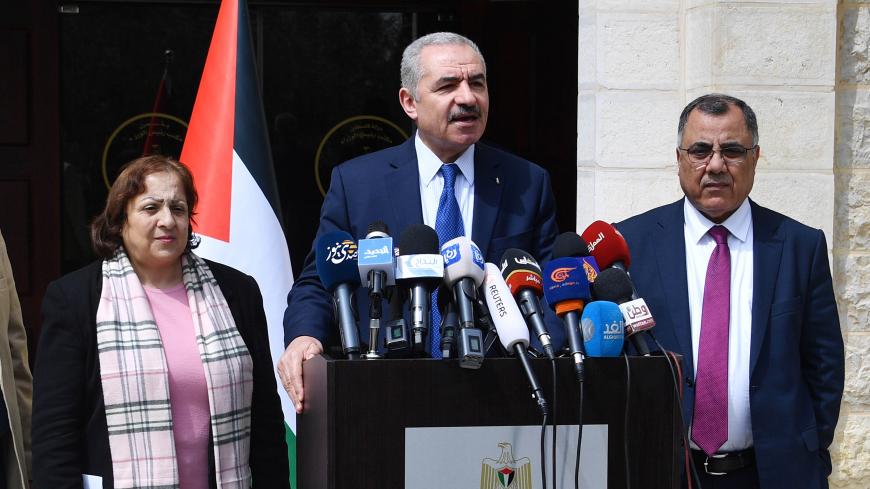 In the age of social networks, conspiracy theories spread like wildfire. But when the Palestinian prime minister himself spreads them, it is no longer a matter of anonymous rumors. These tales and accusations have diplomatic consequences.

Palestinian Prime Minister Mohammad Shtayyeh didn’t blink when he told a press conference in Ramallah March 29, “We have heard testimony that some soldiers are trying to spread the virus through the door handles of cars. It is a case of racism and hatred by people who hope for the death of the other. We will add this to the list of crimes they’ve committed.”

Shtayyeh didn’t end there, also boosting a conspiracy popular among Palestinians that the reason Israel allowed 30,000 Palestinian laborers to work in its territory was not concern for the Palestinian Authority’s economy or to help these workers earn a living. Rather, it was part of a dark plot to infect these workers with the coronavirus, so that they would infect the population of the West Bank when they returned home. Shtayyeh lended this conspiracy theory the weight of his office when he said that a Palestinian working in Israel was infected with the disease and went on to infect another 20 people in his village.

Two days later, Shtayyeh tweeted that not only is Israel refusing to help the Palestinian Authority in its war against the pandemic, but that it also poses a major obstacle to efforts to help Palestinians living in the territories. “What is required is for Israel to leave us alone,” he wrote.

Israel did not offer an official response. Under normal circumstances, Prime Minister Benjamin Netanyahu would milk the comments for all they were worth. This time, he remained silent. The same is true of Defense Minister Naftali Bennett and the Coordinator of Government Activities in the Territories, Maj. Gen. Kamil Abu Rokon, who serves as military liaison to the Palestinians. None of them responded. A statement released by the security forces to the press read, “We condemn the harsh incitement and remind the Palestinian public and the international community of all the medical aid  that we are sending daily and all of Israel’s aid to the people of Judea and Samaria [the West Bank]. This includes the transfer of thousands of test kits, protective equipment and disinfectants, medical training for rescue teams and more.” The unattributed statement sent the Palestinians a sharp message of protest against the remarks by the Palestinian prime minister.

Shtayyeh’s comments shocked many in Israel. He had been personally involved in reaching the agreement between Israel and the Palestinian Authority to allow tens of thousands of laborers to leave the West Bank and work in Israel. When the pandemic struck, Israel made a series of decisions in coordination with the Palestinian Authority to cooperate on preventing the spread of the disease while avoiding triggering an economic crisis.

As a first stage, the Coordinator of Government Activities in the Territories gave some 30,000 Palestinians who work in construction and agriculture special permits to work and sleep in Israel for a period of about two months. Their employers were required to provide them with reasonable living conditions and medical care if requested. It was a precedent-setting decision out of concern for the economies of both the Palestinian Authority and Israel during the pandemic. Shtayyeh supported the decision, but he called on these laborers not to work in any settlements.

This cooperation is can be seen in an incident in Kafr ‘Aqab, a Palestinian neighborhood in northeast Jerusalem, on March 30. When a resident of the village was infected with the coronavirus (the one Shtayyeh insinuated was infected in Israel and went on to infect another 20 people in his village), a local committee was established in the village to handle the crisis and prevent the spread of the disease. One of its decisions was to put up a roadblock manned by Tanzim militants affiliated with Fatah. The roadblock caused such intense friction with the residents of neighboring villages that a gunfight broke out. One resident was wounded and required medical attention. For the first time ever, Israel allowed the Palestinian Authority’s elite 101 Brigade to restore order in the village, even though the territory is under Jerusalem’s municipal jurisdiction. An Israeli security source told Al-Monitor this week on condition of anonymity, “So far, we have no intention of imposing sanctions on the Palestinian Authority as a result of this incitement. What should we do? Stop helping them? Punish the residents of the West Bank because of some ridiculous remark by a populist prime minister acting irresponsibly?”

Shtayyeh has held a very firm and militant stance against Israel ever since he was appointed prime minister in March 2019. He takes every opportunity to call for economic disengagement from Israel and has been criticized for it by other senior PA officials, who contend that the goal is unrealistic because the two economies are so intertwined. Shtayyeh has a PhD in economics from Sussex University and served as dean of Bir Zeit University. He was also a member of the Palestinian negotiating team in peace talks with the Israelis. Many Israeli analysts believe that he is preparing to run for the presidency once Mahmoud Abbas leaves the post. His firm positions on economic issues are widely seen in Israel as serving his personal interests, intended to help him advance politically and distinguish him from the other candidates in the race to succeed Abbas.

Israel has indicated that it will not stop, slow or place conditions on its cooperation with the Palestinians at this time. Nevertheless, a senior security official told Al-Monitor on condition of anonymity, “We believe that the incitement and serious conspiracy theories that he is promoting now, during an international crisis, will boomerang against him.” He was probably saying that when the crisis is over, the European Union and international organizations will see Shtayyeh as a controversial and even a hostile figure.