Is there a coronavirus peace dividend for Israelis and Palestinians?

Cooperation between Israeli and Palestinian leaders to contain the coronavirus sparks hope for deeper cooperation as Benjamin Netanyahu and Benny Gantz edge closer to a unity government. 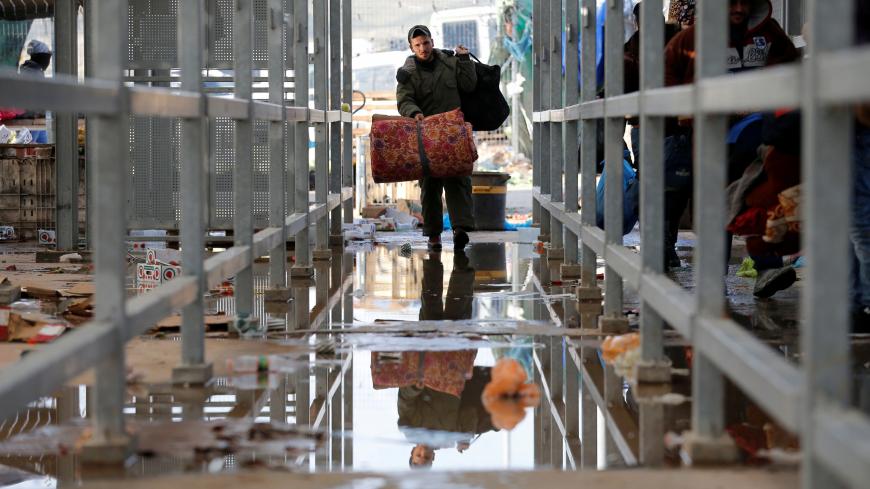 A Palestinian man heads to work in Israel via an Israeli checkpoint after the Palestinian Authority ordered Palestinians working in Israel to stay at their workplaces over concerns of the spread of the coronavirus, near Hebron Israeli-occupied West Bank, March 18, 2020. - REUTERS/Mussa Qawasma

“The coronavirus outbreak has done what local and international politicians and activists have been unable to do,” writes Daoud Kuttab.

Israeli and Palestinian leaders are talking at the highest level and stepping up cooperation through existing official channels to contain the spread of the novel coronavirus.

The same day, Israeli Prime Minister Benjamin Netanyahu met with doctors from the Arab sector to emphasize that all citizens must cooperate with the Ministry of Health guidance. “There is not enough observance in the Arab sector of the directives,” Netanyahu said.

Israel has so far 427 documented cases of COVID-19 out of a population of 8.6 million (1.9 million are Arabs), with 44 cases in the West Bank, where an additional nearly 3 million Palestinians live.

A win-win on Palestinian workers

Israeli and Palestinian leaders hammered out an agreement that allows 30,000 Palestinian workers from the West Bank to stay in Israel for at least two months in order to limit the traffic at border crossings and thereby prevent the spread of the virus. This number could increase to 70,000. Israel must provide housing and sanitary facilities, per the agreement. Palestinian authorities have advised the laborers not to enter or work on Israeli settlements, although this may be difficult to enforce.

Ahmad Melhem reports that Palestinians over 50 years of age will not be allowed to work in Israel, as this age group is considered a higher risk for the virus.

In addition to the public health advantages of the arrangement, both sides benefit economically.

About 120,000 West Bank Palestinians have permits to enter Israel each day, with tens of thousands more entering without permits.

The West Bank economy depends on the wages from these workers for as much as 14% of its gross national income of $18 billion, according to one estimate. The wages are higher in Israel than they are in the West Bank, and sometimes even higher in settlements.

And Israel’s economy depends on these workers.

“If the decision had not been made right now, the construction and agricultural sectors of the Israeli economy would have collapsed immediately,” writes Shlomi Eldar.

Eldar points out that the relationship between Israel Finance Minister Moshe Kahlon and his Palestinian counterpart, Shukri Bishara, has been key to cooperation during otherwise acrimonious ties. This connection could be lost if Kahlon is replaced if and when a new Israeli government is formed.

Palestinian official: 'We don’t have the means' to deal with massive COVID-19 outbreak

The agreement on Palestinian laborers is a sign of the urgent need for even more extensive cooperation, as the coronavirus is likely to spread widely in the coming weeks and months.

Crowded conditions in the West Bank and Gaza, including approximately 775,000 refugees living in West Bank refugee camps (out of a population of almost 3 million) and 1 million (out of 1.6 million) living in Gaza camps, make control of the pandemic a nightmare for Israeli and Palestinian authorities and their people.

So far there have been no cases in Gaza, perhaps a result of the existing tight blockade, Shlomi Eldar explains. When Gaza, which has a collapsed economy and infrastructure and virtually no COVID-19 testing kits, is exposed to the virus, it will spread rapidly, given the crowded and difficult conditions in which the people live there. And it will threaten Israel’s population too, given the traffic and despite the blockade and the congestion at checkpoints.

“If, God forbid, we have a large spread of the disease, we don’t have the means to deal with it,” Minister of Civil Affairs of the Palestinian Authority (PA) Hussein Al-Sheikh told Daoud Kuttab. “Our hospitals can’t handle such an outbreak and our financial situation is very limited at the present time; we have asked the Israelis to release our funds that have been held up for some time because of the current circumstances.”

Jibril Rajoub, secretary-general of the Fatah movement (the leading Palestinian party) and reportedly a possible successor to Abbas, told Kuttab he hoped the crisis would allow the review and release of cases of older Palestinians held in Israeli jails, which are especially prone to the spread of the virus.

Kuttab concludes that “the high level of cooperation and coordination between Israel and the Palestinian government can be an important opportunity for some relief for Palestinians,” including, perhaps, the release of prisoners and ending the withholding of a percentage of customs duties on imports into the West Bank and Gaza held by the Israeli government for the PA’s payments to families of those imprisoned for attacks on Israel and the killing of Israelis.

It is also worth keeping in mind that we are at the beginning of this crisis, and the complete closing of Israel’s borders with the West Bank and Gaza, if and when the coronavirus spreads there, is a certain if not likely outcome.

Netanyahu has seized the coronavirus crisis not only to prevent a massive outbreak in Israel but also to strengthen his case for a unity government.

Although Blue and White Party leader Benny Gantz received the mandate from Rivlin on March 16 to form a new government, based on a narrow majority of 61 (out of 120 Knesset members), the prospects of his doing so are increasingly slim for two reasons.

First, although Gantz earlier ruled out a unity deal with Netanyahu, he is now saying he is open to it, as Mazal Mualem reports. "There are principles,” Gantz said on television on March 19, “but there are also circumstances of an economic crisis. It would be wrong to stick with some sort of a statement.’’

Gantz’s position has split Blue and White, which is only a year old, and Netanyahu has seized the opening.

Second, the death blow for Blue and White, if there is a deal with Netanyahu, may have come from its receiving the backing of the 15 members of the Arab Joint List, Ben Caspit writes. Caspit explains that as many as six or seven members of the soft right in the Blue and White coalition can’t stomach even the passive support of Israel’s Arab lawmakers, and two Blue and White Knesset members have already bailed. This shrinks the Blue and White coalition from 61 to at least 59, and probably fewer, below the threshold, creating the opening for Netanyahu to split the party and cut the deal with Gantz and those who are willing to make the compromise.