As the PA struggles to cope with an ongoing financial crisis, the novel coronavirus is making things worse. 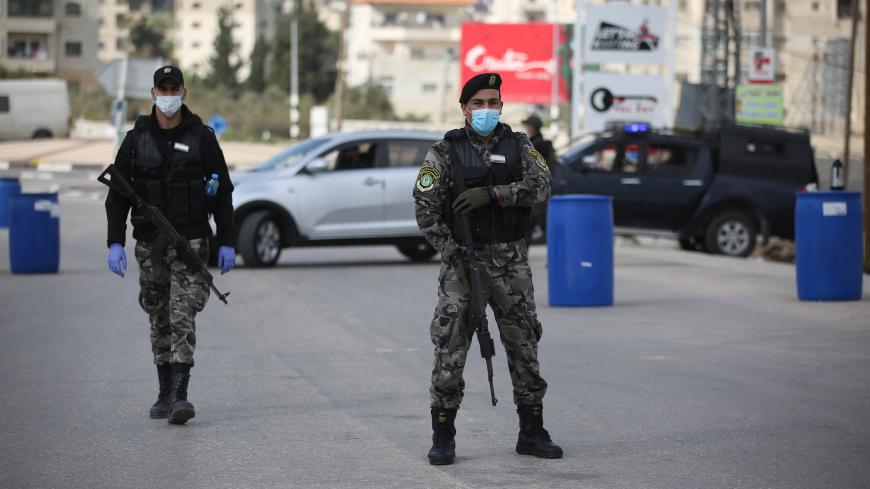 RAMALLAH, West Bank —The state of emergency declared by Palestinian President Mahmoud Abbas on March 5 and the strict measures announced by the government on March 18 to stem the spread of COVID-19 in the Palestinian territories are expected to further constrain the financial capacity of the Palestinian Authority (PA). The government was expected to pay the full salary of state employees, but if the state of emergency is prolonged, a financial crisis will loom.

Two factors will contribute to deepening the PA’s financial crisis: a decrease in clearing funds (i.e., taxes and import duties) driven by a decline in trade and higher expenditures in responding to the state of emergency, such as the extensive deployment of security services in cities, amelioration of the effects of rising unemployment and increased medical costs and establishment of quarantine centers. As of April 2, there were 160 coronavirus infections recorded in the West Bank and Gaza and one death. Eighteen people had recovered from COVID-19.

Uncertainty about the costs associated with the COVID-19 crisis has in part curbed the government’s efforts to announce a general budget for fiscal year 2020, which runs a calendar year. The budget is usually released during the first quarter. The Cabinet held a second reading on it on March 15, but as of April 1 still had not held the required third reading before submitting the budget to Abbas for approval.

At a March 29 press conference, Prime Minister Mohammad Shtayyeh said that under the budget submitted to the Cabinet, government revenue will drop by more than 50%, and international aid will also decrease. Given this financial state of affairs along with the coronavirus outbreak, the government will operate based on an emergency, austerity budget. Shtayyeh estimates the government will need around $120 million to deal with the virus. “The financial situation will be difficult in the coming days,” he said, calling on Palestinians to be prepared.

Amjad Ghanem, the PA Cabinet's secretary-general, told Al-Monitor, “The state of emergency imposes financial burdens on the government, but the government will not bury its head in the sand and will deal with the decrease in revenues and increase in medical expenses.”

The 2020 budget is expected to be similar to the emergency budget that the government drafted in March 2019 after Israel began deducting funds from PA import revenue equivalent to monies paid to support Palestinian prisoners in Israeli jails and their families. Israel collects import duties and taxes on the PA's behalf as per the Oslo Accords.

“The clearing funds that Israel is withholding are capable of putting an end to the financial crisis plaguing the PA, helping the government deal with the COVID-19 crisis and honoring its financial obligations,” Ghanem asserted.

To weather the current economic storm, the PA will be dependent on international aid, including from the Arab states, and local donations. On March 24, the Finance Ministry announced the opening of a bank account to which individuals, companies and other enterprises and organizations can deposit donations to help the government combat the coronavirus.

Even before the account was opened, the Arab Bank and businessman Munib al-Masri had each donated $1 million, on March 19 and March 24, respectively. The privately owned Palestine Telecommunications Company, or Paltel, donated half a million dollars on March 9.

Qatar announced on March 9 that it would provide $10 million to the PA effort to stem the spread of the coronavirus and on March 18 announced the provision of an additional, unspecified amount of urgent financial assistance. The Qataris also plan to donate $150 million over the coming six months to fight the coronavirus in Gaza, and Kuwait provided $5.5 million to the effort on March 16. The United Nations provided $1 million in urgent medical assistance on March 18.

PA Health Minister May Kila told Al-Monitor, “We have a financial challenge to address, especially as we have no control over our financial resources.” Kila said that in addition to funding problems, the biggest challenge is to obtain coronavirus test kits and ventilators. Given the shortage of these items, she said, the focus needs to be on prevention.

Nasr Abdel Karim, an economics and finance professor at the Arab American University in the West Bank, told Al-Monitor, “If the virus crisis fails to subside within one or two months, then the PA will fail to honor its financial obligations, because this infers a paralyzed economy and lower tax revenues.”

Abdel Karim believes tax revenues might decrease by 50% and that the PA could partially cover deficits through international support or limited borrowing from banks and the private sector. To support the functioning of the health sector, he said, the PA might need to pay only half of state employees' salaries, as it did in 2019 during the clearing crisis.

“The PA is set for a financial crisis that is more severe than the clearing crisis, as it is an open-ended crisis,” said Abdel Karim, also noting the added burden of health expenditures coupled with a decrease in revenues.

The crisis, he said, will not be limited to the PA, but will affect enterprise owners, workers, farmers, and civil institutions.