So far, the closure has protected the Gaza Strip from the coronavirus, but Israeli specialists estimate that a COVID-19 outbreak there is just a matter of time. 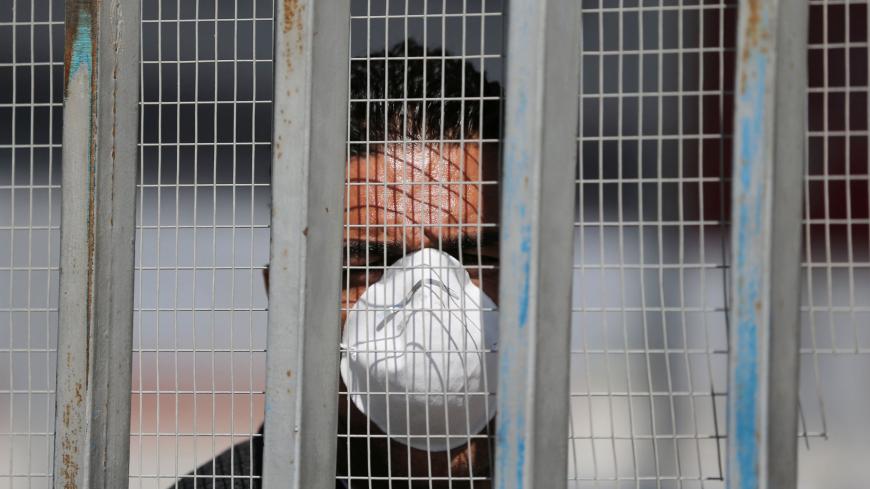 A man wearing a mask amid the global coronavirus outbreak looks through a fence as he waits for Palestinians returning from abroad, at the Rafah border crossing with Egypt, southern Gaza Strip, March 8, 2020. - REUTERS/Ibraheem Abu Mustafa

Defense Minister Naftali Bennett’s announcement March 11 that the total closure of the Gaza Strip will be extended until the night of March 14 shows how deeply concerned Israel’s political and defense leadership is about an outbreak of the novel coronavirus there. The threat of COVID-19 reaching Gaza and sparking an extreme humanitarian health crisis is real. So far, there have been no reports of people in Gaza being infected by the coronavirus. This can be attributed to the territory’s isolation, which offers Gaza relative safety from the virus. The problem is that according to every assessment, it is only a matter of time before the first cases are identified there. Given current circumstances, it is doubtful that the flimsy infrastructure in the most densely populated region in the world would be able to contend with a dramatic crisis of such serious proportions.

The sensitive nature of the defense minister’s decision and its political and security volatility required coordination with Prime Minister Benjamin Netanyahu before it could be released. On one hand, this decision was intended to keep developments in Gaza under control. On the other hand, it was not intended to result in a total, long-term closure of the border crossings. Israel is worried that an economic catastrophe in Gaza would result in sheer chaos. After all, Gaza already suffers from widespread poverty and unemployment. It has teetered on the verge of economic collapse for years.

All of this is happening with Israel caught in the middle of the worst political crisis in its history, with no end in sight. After a third election that left the country in limbo, Netanyahu finds himself facing what may be the most severe economic, social and health crisis in its history. And all of this is happening with Netanyahu’s trial for corruption scheduled to begin in the Jerusalem District Court next week, leaving his political future uncertain. Despite that, the chance of a fourth round of elections anytime soon gets smaller by the day. It is obvious by now that if the coronavirus continues to spread, it will be impossible to hold another election in Israel. Meanwhile, Netanyahu took the step of announcing that all events with over 100 participants are banned until further notice.

A senior political source told Al-Monitor that a pandemic in Gaza is Israel’s greatest nightmare. In fact, worries that some sort of health emergency might take place have been raised over the years in regular assessment meetings. “Before this, the concern was of some kind of plague erupting in Gaza, killing thousands of people and more because of poor sanitation. But this is different. Gaza is isolated, and as a result, is protected, but if we seal it off hermetically, we would cause civil unrest. Images of tens of thousands of Gazans along the border fence with Israel could send us into a downward tailspin. It is a short path from that to an outbreak of violence and maybe even a third intifada. People will have nothing to lose. At this stage, hundreds of thousands of Gazans still go to work in the morning, and hundreds of thousands of children go to school. As soon as all that falls apart, we will be facing a whole new situation,” said the source, who spoke on condition of anonymity.

Indeed, the political leadership echelon heard and internalized these assessments. That is why the final decision of Bennett only limited the total closure of Gaza until March 14. As of now, about 7,000 Palestinians from Gaza hold permits allowing them to work in Israel. Before the coronavirus outbreak, it was decided to increase this number as part of a larger effort to reach an arrangement with Hamas. Now, however, it is no longer clear that Israel can continue along this trajectory. Workers from Gaza arriving in Israel could be exposed to the coronavirus here. Then, when they return to Gaza, they would infect their families and friends there. (On March 12, Israel said it has 109 COVID-19 cases.)

One minister who is in direct contact with senior officials in the Palestinian government told Al-Monitor that the situation in the West Bank is different, because it is so difficult to isolate the entire region. Furthermore, there are about 120,000 West Bank Palestinians working in Israel, so that even in this case, Bennett has adopted a moderate policy. While he is allowing these workers into the country, he has imposed a total closure on certain areas, such as the town of Bethlehem. Here, too, the goal is to maintain a balance between protecting the Palestinian economy and Israel’s security interests. According to the minister, this is why an initiative to ban all Palestinian workers from entering Israel was dropped, along with the idea of allowing those workers to sleep in Israel. He said, on condition of anonymity, “That could be problematic, because the brunt of the burden would then fall on the Shin Bet, and it will be difficult to provide a hermetic response to terrorist attacks.”

As of now, everyone realizes that Gaza will only be protected for a limited amount of time. It is actually quite reasonable to assume that we will learn over the next few days that the coronavirus is already there. Israel’s political leadership worries that responsibility for a severe outbreak in Gaza costing lives will fall squarely on Israel’s shoulders too and refocus world attention on the harsh conditions under which the local Palestinians are living.

Meanwhile, security collaboration between Israel and the Palestinian Authority has gotten closer as a result of the coronavirus, while Hamas doesn’t seem to have any interest in attacking Israel right now. It would rather focus its energies on the challenges posed by COVID-19. In the eleven years since he returned to power in 2009, Netanyahu has preferred to manage the conflict with the Palestinians, instead of trying to resolve it. He may soon discover that he no longer controls the situation. Usually, Netanyahu’s default choice is to limit immediate risks. That is how he is managing the coronavirus, and how he manages policy in general, when dealing with the Palestinian-Israeli conflict. On the one hand, he is able to keep the flames in check and postpone another violent clash with Hamas, using Qatari money and following a policy of divide and rule in dealing with Hamas and the Palestinian Authority. On the other hand, he never considered a scenario in which a ‘’force majeure’’ would reshuffle the deck in every imaginable way, and force him to handle a plague of biblical proportions spreading across the Gaza Strip.

by Murielle KASPRZAK and Joseph SCHMID | AFP | May 26, 2022
END_OF_DOCUMENT_TOKEN_TO_BE_REPLACED